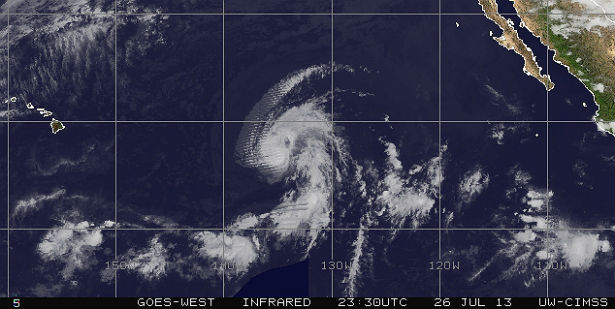 Tropical system developed on July 25, 2013 in East Pacific gained more strength on its track toward Hawaii. Tropical Storm Flossie is now tracking west-northwestward towards the Hawaii and should reach the islands coast by the next two or three days. The storm should gradually turn to the west in 24-48 hours as the ridge strengthens somewhat. 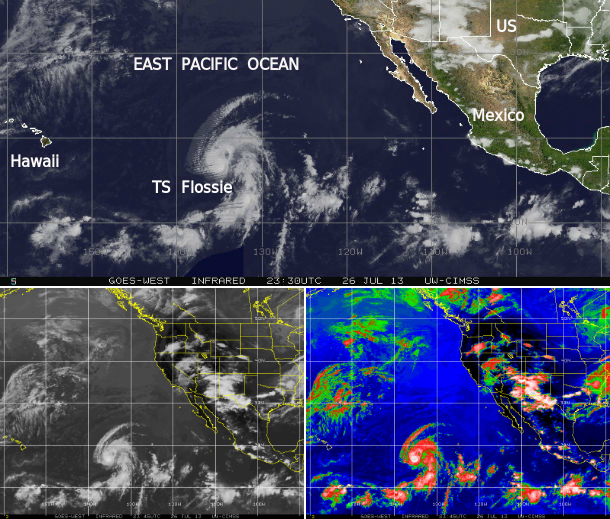 According to latest public advisory (#8) issued by US National Hurricane Center (NHC), the center of Tropical Storm Flossie was located about 1395 miles (2245 km) E of Hilo, Hawaii. The system is moving west-northwestward at speed of 20 mph (32 km/h). Maximum sustained winds are 60 mph (95 km/h) with higher gusts.

A gradual weakening of Flossie should commence in the next 24 hours as it moves over cooler waters, into drier air aloft and light to moderate wind shear. The system is expected to dissipate west of the Hawaiian islands after the next five to six days due to strong southwesterly shear. Flossie is expected weaken to a tropical rainstorm by July 30, 2013. However, strong surfs, heavy downpours and lightning activity is still expected.