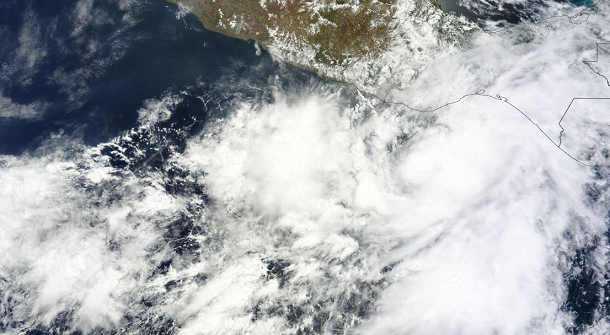 The structure of low level pressure area (Invest 92E) in Eastern Pacific has improved dramatically since the last 12 hours. Infrared satellite images have even shown an eye-like feature during the past couple of hours and the system became Tropical Storm Barbara. Maximum sustained winds have increased to near 75 km/h (45 mph) with higher gusts.

According to latest public advisory by US National Hurricane Center (NHC), on May 29, 2013 at 03:00 UTC, the center of Tropical Storm Barbara was located 195 km (120 miles) SSW of Salina Cruz, Mexico​, near latitude 14.5 north and longitude 95.7 west. Tropical storm force winds extend outward up to 95 km (60 miles) from the center. The estimated minimum central pressure is 1001 mB (29.56 inches). Given the relatively small inner core and the favorable environmental conditions, a fairly steep increase in intensity is possible before the center of the storm reaches the coast. 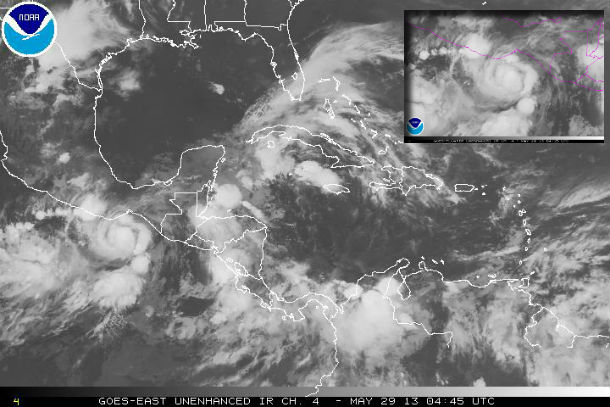 The system is moving toward the north-northeast near 6 km/h (3 mph). It is expected to accelerate toward the north-northeast over the next 12 to 24 hours. The center of TS Barbara should reach the coast of southern Mexico during the May 29, 2013. Additional strengthening is forecast before the center of TS Barbara reaches the coast. The NHC forecast track brings the center of Barbara inland along the shore of the Gulf of Tehuantepec in 12 to 24 hours. Weakening is forecast after landfall and TS Barbara should dissipate over southern Mexico by May 30, 2013. 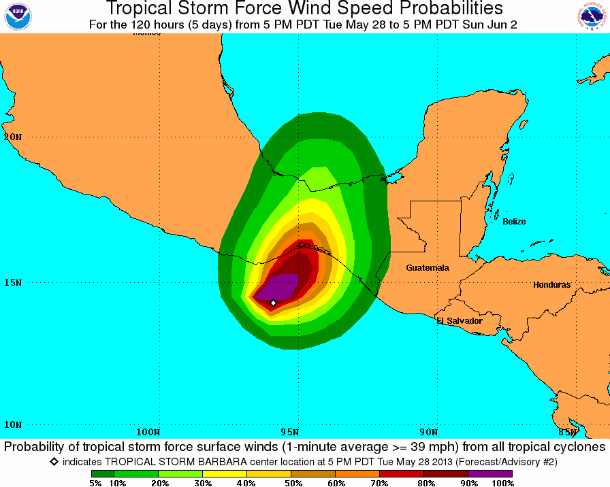 The cyclone is moving over extremely warm water on the order of 30 degrees Celsius. Barbara could gain a little more strength just before reaching the coast but time will be the limiting factor. Quick weakening is expected after landfall and the low-level circulation should dissipate over The Isthmus of Tehuantepec by 48 hours, if not sooner.

TS Barbara is expected to produce total rain accumulations of 3 to 6 inches over southern Oaxaca Mexico, with isolated maximum amounts of 10 inches possible in southeastern Oaxaca. Tropical storm conditions are expected to first reach the coast within the warning area in the next 12 hours, making outside preparations difficult or dangerous.

Due to the expected slow motion of Barbara and its remnants…as well as the mountainous terrain in and near the landfall area…the biggest hazard will likely be heavy rainfall and the potential for flash flooding and mud slides.