The tenth tropical cyclone in the Southern Pacific Ocean season gained its strength north of Samoa in South Pacific Ocean. This tropical disturbance was named Garry (TC 10P) on January 22, 2013 as it was passing near Samoa. A gale warning remained  in effect for Tutuila, Aunuu and Swains Island and a storm warning was effect for Manua. On January 22, 2013 at 09:00 UTC, Garry had maximum sustained winds near 45 knots with gusts up to 55 knots. Tropical-storm-force winds extended 50 nautical miles (92.6 km/57.5 miles) out from the center. 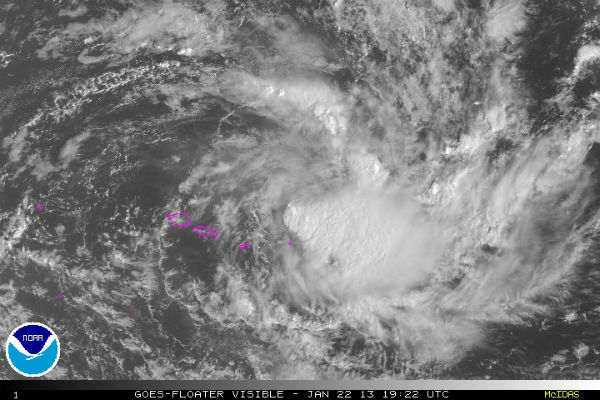 Infrared satellite imagery from NASA showed that Tropical Storm Garry's power lies around its center as it was passing north of Samoa on January 22, 2013 (Credit: NOAA/GOES)

According to latest report by Joint Typhoon Warning Center (JTWC), Tropical Storm Garry was located near 13.2S latitude and 169.8W longitude, about 85 nautical miles (157.4 km/97.8 miles) northeast of Pago Pago, American Samoa and is moving south-southeastward at speed of 6 knots. Garry is forecast to move slowly eastward away from Samoa over the next 72 hours  under the steering influence of a low- to mid-level near equatorial ridge to the north, intensifying to a peak of 65 knots under the marginal upper-level environment. 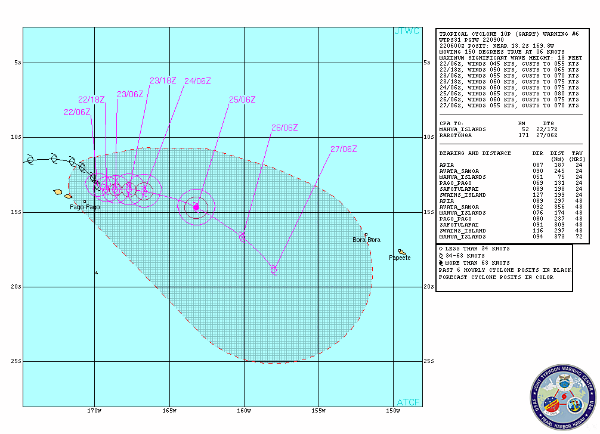 The Atmospheric Infrared Sounder (AIRS) instrument that flies aboard NASA's Aqua satellite captured an infrared image of Tropical Storm Garry on January 22, 2013  at 12:41 UTC (7:41 a.m. EST). The coldest cloud tops and strongest storms appeared south of the tight center circulation. The coldest cloud top temperatures were near -52 Celsius (-63 Fahrenheit). There is also strong convection or rising air that forms thunderstorms, over the southeast quadrant and broken bands of thunderstorms north of the center. 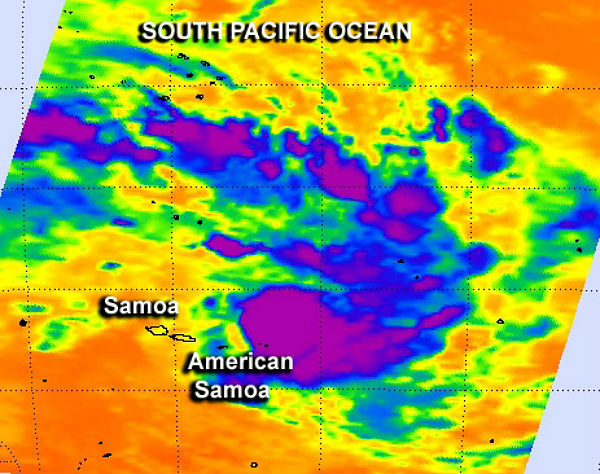 This infrared image of Tropical Storm Garry was captured on January 22, 2013 at 12:41 UTC by the AIRS instrument that flies aboard NASA's Aqua satellite. The coldest cloud tops and strongest storms (purple) were south of the storm's center of circulation. (Credit: NASA JPL, Ed Olsen)

Garry is forecast move slowly to the east and away from Samoa over the next several days. 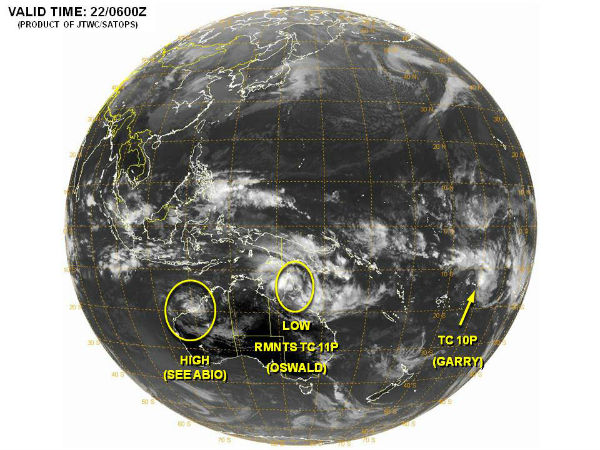