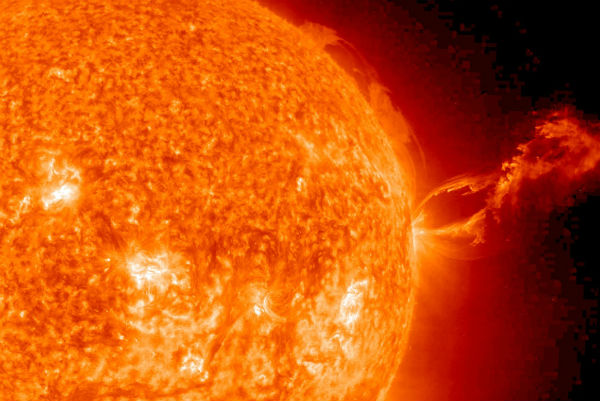 The Sun is constantly roiling with nuclear heat and intense magnetism that make sunspots, flares, coronal mass ejections, and all sorts of space weather. When directed toward Earth, those solar blasts can disrupt satellite and radio communications, damage our electric-powered tools and toys, and create auroras.

But it is not always easy to know when the Sun is spitting plasma and energy in our direction. This is why NASA launched the Solar Terrestrial Relations Observatory, or STEREO, in October 2006. The twin satellites were sent out along roughly the same orbit around the Sun as the Earth itself. The orbit of STEREO-A (ahead) is slightly closer to the Sun and moving faster than Earth; the STEREO-B (behind) orbit is slightly farther from the Sun and moving a little slower than our planet. The difference in speed creates separation between the satellites and a stereoscopic view of our nearest star.

The images above show the surface of the Sun from two different angles on October 14, 2012. The left image is from STEREO-B and shows a dark vertical stripe on the upper middle face of the Sun. The right image comes from STEREO-A, which was more than 90 degrees ahead of STEREO-B; that is, somewhat beyond a right angle from that vertical stripe. The vertical stripe instead shows up as a large loop stretching into the solar atmosphere, or corona. (Credit: NASA STEREO/Earth Observatory)

The stripe and the loop are differing views of the same dense mass of electrified gas (plasma) held in place by a magnetic field. When viewed straight on, as in the STEREO-B image, the line of plasma appears darker because it is relatively cooler than the solar surface below. (More of its energy is magnetic than radiant.) Solar scientists call these dark lines “filaments.” When viewed from the side, however, the line of plasma looks like a bright loop stretched out against the blackness of space; solar physicists call this a prominence. Essentially, filaments and prominences are the same phenomenon, just viewed from a different perspective. 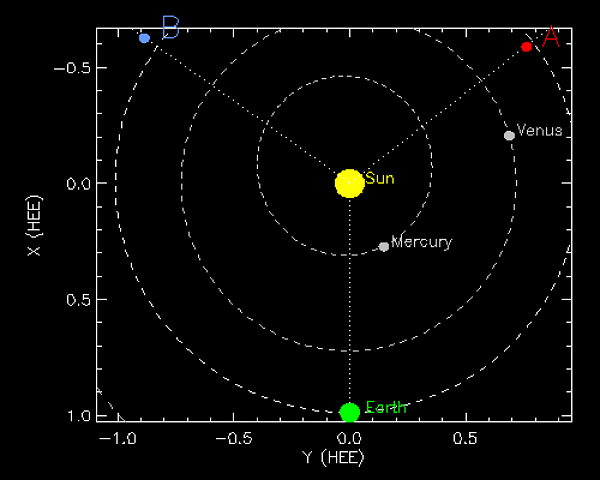 As of September 1, 2012, STEREO-A and STEREO-B formed an equal-sided triangle together with NASA’s Solar Dynamics Observatory (SDO), which views the Sun from orbit around Earth. This geometry allowed the three craft to provide overlapping views of the entire Sun. It also allows solar physicists to study solar events in three dimensions.

A solar prominence (also known as a filament when viewed against the solar disk) is a large, bright feature extending outward from the Sun’s surface. Prominences are anchored to the Sun’s surface in the photosphere, and extend outwards into the Sun’s hot outer atmosphere, called the corona. A prominence forms over timescales of about a day, and stable prominences may persist in the corona for several months, looping hundreds of thousands of miles into space. Scientists are still researching how and why prominences are formed. 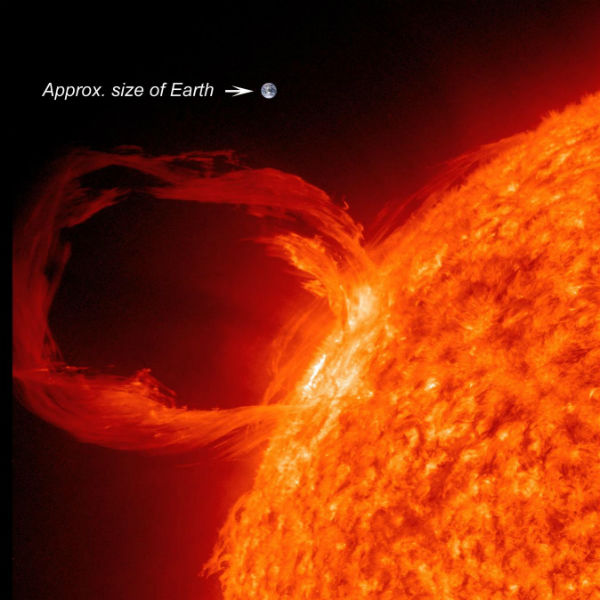 A solar eruptive prominence as seen in extreme UV light on March 30, 2010 with Earth superimposed for a sense of scale. (Credit: NASA/SDO)

The red-glowing looped material is plasma, a hot gas composed of electrically charged hydrogen and helium. The prominence plasma flows along a tangled and twisted structure of magnetic fields generated by the sun’s internal dynamo. An erupting prominence occurs when such a structure becomes unstable and bursts outward, releasing the plasma.

When a prominence is viewed from a different perspective so that it is against the sun instead of against space, it appears darker than the surrounding background. This formation is instead called a solar filament. It is possible for a projection to be both a filament and a prominence. Some prominences are so powerful that they throw out matter from the Sun into space at speeds ranging from 600 km/s to more than 1000 km/s. Filaments last for a few weeks or months. The gas in a filament will eventually move to a different layer in the Sun and will no longer be visible in an image of the chromosphere.