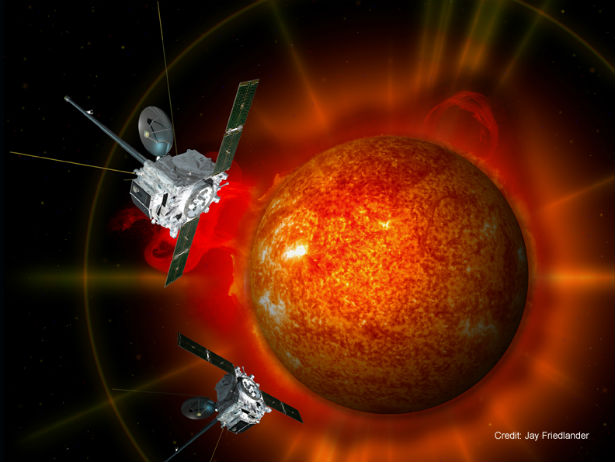 NASA's revolutionary twin STEREO probes which allowed us to see the farside of the Sun and make 3D models of incoming CMEs will pass directly behind the Sun later this year making images from the probes unavailable for quite some time.

While planning the mission, science team gathered around STEREO mission expected a brief eclipse during this passage, however, it now seems that the operations will be curtailed for more than a year. The problem lies in STEREO's high gain antenna and its heat-sensitive components which would overheat if pointed too close to the Sun during the passage.

This engineering problem was not anticipated when STEREO was launched in 2006. 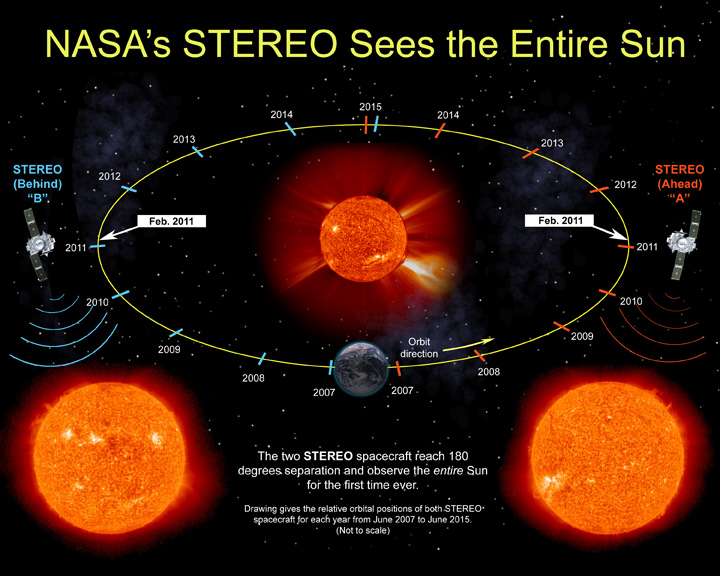 Illustration of the positions of the two STEREO spacecraft show that they attain 180 degrees of separation in Feb. 2011, thus allowing the world to see the entire Sun for the first time. (Credit: NASA/STEREO/SSC)

STEREO (Solar TErrestrial RElations Observatory) is the third mission in NASA's Solar Terrestrial Probes program (STP), and it has provided a unique and revolutionary view of the Sun-Earth System.

The two nearly identical observatories – one ahead of Earth in its orbit, the other trailing behind – have traced the flow of energy and matter from the Sun to Earth. STEREO has revealed the 3D structure of coronal mass ejections; violent eruptions of matter from the sun that can disrupt satellites and power grids, and help us understand why they happen. STEREO is a key addition to the fleet of space weather detection satellites by providing more accurate alerts for the arrival time of Earth-directed solar ejections with its unique side-viewing perspective. 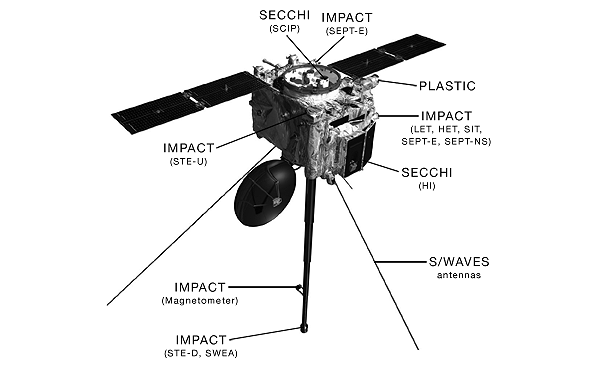 Unexpectedly high temperatures in the high-gain antenna feed horns on both STEREO spacecraft will require corrective action in the coming months that will severely limit science operations. The high temperatures are being caused by the small angle between Earth and the Sun as seen from each spacecraft. Pointing the antenna at Earth is putting too much solar heat on the antenna feed horn.

To bring down the feed horn temperature, and preserve the spacecraft for years to come, the antennas will be pointed off at an angle from both Earth and the Sun, so that less heat will fall on the feed horns. Communication will still be possible using one of the antenna side lobes, but the telemetry rate will be extremely low. What instrument operations can be supported while the antennas are off-pointed is still being studied.

A test of operating the STEREO Ahead spacecraft in this off-pointed mode will be conducted during the week of July 6 – 12, 2014. All science instruments will be turned off during this time, and instrument recovery operations are expected to take several days. The same test will be made on the STEREO Behind spacecraft from September 29 to October 6, 2014. 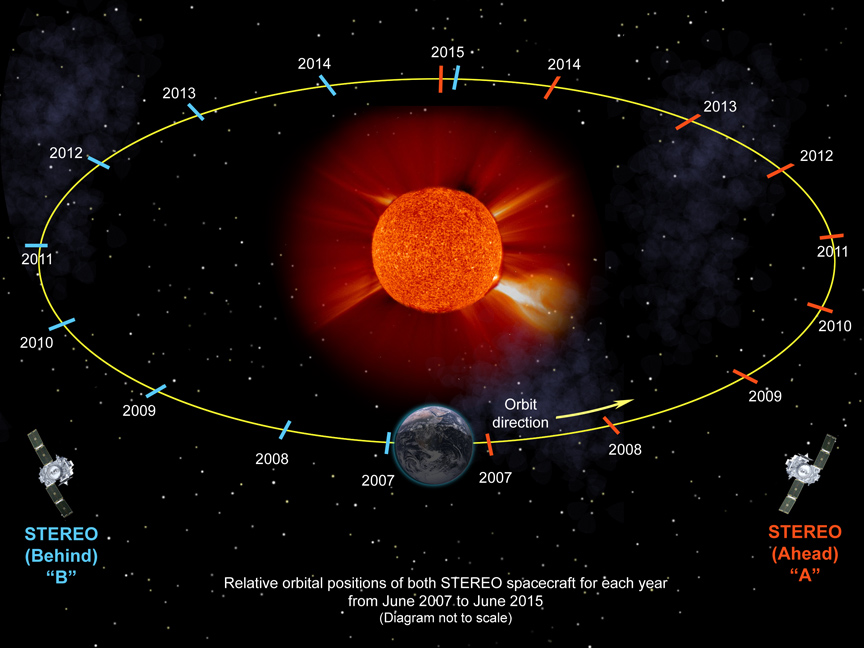 Illustration of the positions of the STEREO spacecraft for each year from June 2007 to June 2015. (Credit: NASA/STEREO/SSC)

There is the possibility that low-bandwidth science data may be transmitted for a couple of hours each day. Side lobe operations will start on the STEREO Ahead spacecraft on August 20, 2014, and on the Behind spacecraft on December 1, 2014. The two spacecraft will remain in this state for just over a year, with normal operations resuming in January 2016. There will also be a several month period during this time when no communications will be possible with either STEREO spacecraft as they pass behind the Sun, simply due to too much interference from the Sun itself.