Understanding the sun from afar isn't easy. How do you figure out what powers solar flares – the intense bursts of radiation coming from the release of magnetic energy associated with sunspots – when you must rely on observing only the light and particles that make their way to near-Earth’s orbit?

One answer: you get closer. NASA's MESSENGER spacecraft — which orbits Mercury, and so is as close as 28 million miles (45 million km) from the sun versus Earth's 93 million miles (149 million km) — is near enough to the sun to detect solar neutrons that are created in solar flares. The average lifetime for one of these neutrons is only 15 minutes.  How far they travel into space depends on their speed, and slower neutrons don't travel far enough to be seen by particle detectors in orbit around Earth. Results showing that MESSENGER has likely observed solar neutrons appeared in the Journal of Geophysical Research: Space Physics on July 9, 2014. 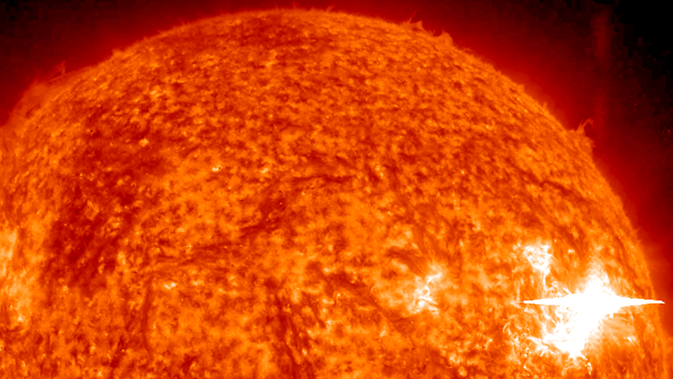 A solar flare erupted on the far side of the sun on June 4, 2011, and sent solar neutrons out into space. Solar neutrons don't make it to all the way to Earth, but NASA's MESSENGER, orbiting Mercury, found strong evidence for the neutrons, offering a new technique to study these giant explosions.

"To understand all the processes on the sun we look at as many different particles coming from the sun as we can – photons, electrons, protons, neutrons, gamma rays –to gather different kinds of information," said David Lawrence, first author of the paper at The Johns Hopkins Applied Physics Lab in Laurel, Maryland. "Closer to Earth we can observe charged particles from the sun, but analyzing them can be a challenge as their journey is affected by magnetic fields."

Such charged particles twirl and gyrate around the magnetic field lines created by the vast magnetic systems that surround the sun and Earth. Neutrons, however, as they are not electrically charged, travel in straight lines from the flaring region. They can carry information about flare processes unperturbed by the environment through which they move. This information can be used by scientists to decipher one aspect of the complicated acceleration processes that are responsible for the creation of highly energetic and fast solar particles.

Lawrence and his team looked at MESSENGER data from June 4 and 5, 2011, corresponding to solar flares that were accompanied by fast-moving, energetic charged particles. The flare occurred on the far side of the sun so Earth-based views of the flare region could not be obtained. However, a solar telescope on NASA's Solar Terrestrial Relations Observatory, or STEREO, spacecraft did have a clear view of the far-side flare region. STEREO provided useful observations of the flare. This combined use of NASA mission data makes each individual mission more effective in addressing unsolved science questions.

The MESSENGER data showed an increase in the number of – not electrically charged — neutrons at Mercury’s orbit hours before the large number of charged particles reached the spacecraft. This indicated that the neutrons were most likely produced by accelerated flare particles striking the lower solar atmosphere, releasing neutrons as a result of high-energy collisions. So, together, the MESSENGER and STEREO data can provide new information about how particles are accelerated in solar flares.