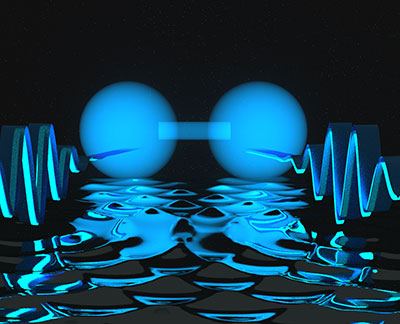 A team of scientists including theoretical physicists from the National Institute of Standards and Technology (NIST) and the University of Maryland, have discovered that a molecule with its own force can be formed from weightless light particles. This discovery has taken the researchers one step closer toward building objects from light.

The research on using photons for building object has been built on the previous research conducted by the NIST collaborators from Harvard, Caltech and MIT. They managed to find a way of binding two photons together in a way to make one sit on top of the other, superimposed during their traveling.

This has been considered a major break-through, as nothing similar has been done so far, and people's imagination jumped straight into constructing a real-life lightsaber.

Although this time is yet to come, the paper to be published in the Physical Review Letters by the end of September 2015, has proved the theory behind the construction. It appears that by modifying a few parameters of the binding process, photons could be made to travel side by side, in analogy to the way the two hydrogen atoms are situated next to each other in a hydrogen molecule, although the construction is not a real molecule.

“It’s not a molecule per se, but you can imagine it as having a similar kind of structure. We’re learning how to build complex states of light that, in turn, can be built into more complex objects. This is the first time anyone has shown how to bind two photons a finite distance apart," explained NIST’s scientist Alexey Gorshkov.

Gorshkov believes the time of Jedi Knights has still a while to go, as the extreme conditions required to produce binding photons are difficult to produce in a much larger conditioned space than the sword's handle. However, the reasons to continue pursuing the research are numerous nevertheless, as, for example, the positive outcome could allow computers to use photons as information processors instead of electronic switches.

“Lots of modern technologies are based on light, from communication technology to high-definition imaging. Many of them would be greatly improved if we could engineer interactions between photons,” Gorshkov added.

Substantial energy amounts could be saved, as well. Phone messages and other data that currently need fiber optic cables to travel wouldn't have to be converted into electrons any more, as it would use the photons directly. Imagine how much electricity could be saved with this step!

Gorshkov says it will be important to test the new theory in practice for these and other potential benefits.

“It’s a cool new way to study photons. They’re massless and fly at the speed of light. Slowing them down and binding them may show us other things we didn’t know about them before,” Gorshkov concludes.

Sources: National Institute of Standards and Technology, The Abstract of the forth-coming paper – Physical Review Letters

​​Featured image: Artist's conception of the two photons as waves (left and right) which can be locked together at a short distance. Under certain conditions it is possible the photons form a state resembling a two-atom molecule, represented as the blue dumbbell shape at center. Image credit: E. Edwards/JQI