Comet ISON is on a journey through our solar system that will culminate in its close encounter with the Sun on November 28, 2013. At that time the comet will pass at a distance of only 2.7 solar radii from the Suns center.

Comet C/2012 S1, named ISON, was discovered in September 2012 by Russian astronomers Vitali Nevski and Artyom Novichonok using data from the International Scientific Optical Network (ISON).Because ISON was discovered relatively early, beyond the orbit of Jupiter, and will fly so close to the Sun, many have high hopes that it could turn out to be a major comet.

An observing campaign is set in motion by a number of solar missions, including SOHO and STEREO, to observe the comet as it passes near the Sun. SOHO's LASCO C2 and C3 coronagraphs are expected to have a view of C/2012 S1 as it passes through their fields-of-view, as presented below. 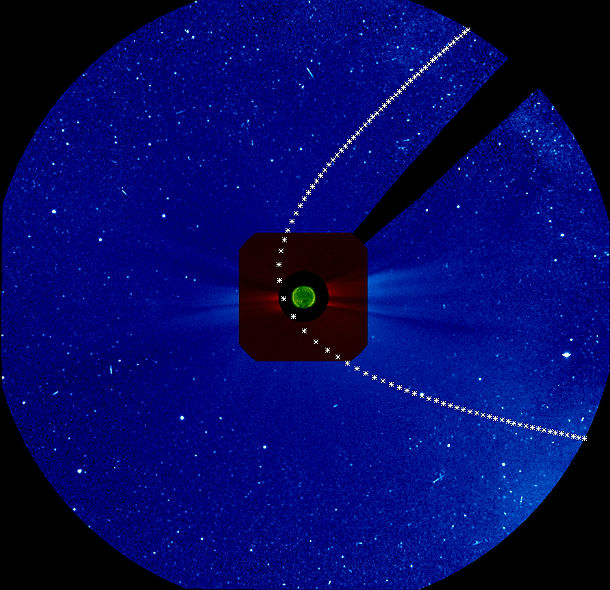 As for SOHO, the comet will enter its viewpoint from the lower right early on November 27, 2013 and will exit towards the top near the end of November 30, 2013.

The first STEREO telescope to get a view of Comet ISON will be the large angle Heliospheric Imager #2 on the Ahead spacecraft (HI2-A). In the first image below we can see the projected day-by-day location of the comet in the HI2-A field-of-view from October 10, 2013, when it is supposed to enter on the left side of the field, through November 23, 2013, when it is expected to exit on the right side of the field. On the right image is the comet's passage through the smaller HI1-A field-of-view November 21-28, 2013.

The two STEREO spacecrafts are expected to have a view of the comet in the COR1 and COR2 coronagraphs in the hours around closest approach on November 28, 2013.

Throughout the period when Comet ISON is nearest to the Sun, it will actually pass in front of the Sun as seen from Behind. This gives us a chance that we could possibly see extreme-ultraviolet emission from the comet, as was seen recently with the bright sungrazing Comet Lovejoy.

After ISON swings around the Sun, it passes once again through the HI1-A field-of view throughout the first week in December, as presented below. At this time, the comet is leaving at such a steep angle that the nucleus never passes through the HI2-A field-of-view without rolling the spacecraft, though there is a chance that a tail might be visible. 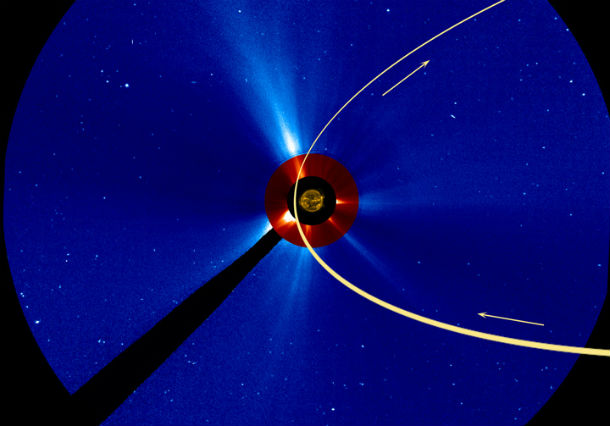 SOHO's LASCO C2 and C3 coronagraphs are expected to have a view of the comet as it passes through their fields-of-view, as shown below. From SOHO's viewpoint the comet enters from the lower right early on November 27, 2013 and exits towards the top near the end of November 30, 2013 (Credit: SOHO)

The trajectory information presented here is based on preliminary estimates of Comet ISON's orbit. With more observations of the comet collected, these orbital estimates will be refined, and improved over time.

Featured image: Predicted position of Comet ISON in the EUVI-B field-of-view in ten-minute intervals between 18:10 UTC and 20:10 UTC on November 28, 2013. (Credit: STEREO)