The Solar and Heliospheric Observatory (SOHO) spotted an unusual object identified as a triple comet flying past the Sun in early August. Although the satellite captures comets all the time– most of which are Kreutz sungrazers– the particular object is not a member of the said family, making it a rare find.

SOHO, a robotic satellite launched by NASA and ESA, collects data from the Sun by observing its various activities and behavior. While gazing at the star in early August, the satellite spotted three comets flying nearby.

"It was a triple comet," said Karl Battams of the Naval Research Lab in Washington DC. "The two main components are easy to spot, with the third, a very faint, diffuse fragment following alongside the leading piece."

Usually, comets captured by SOHO flying past the Sun are members of the Kreutz sungrazers family– fragments of a massive comet that shattered more than 1 000 years ago.

The comet was first spotted on August 5, 2020, by amateur astronomer Worachate Boonplod. At discovery, it was just a tiny faint smudge near the edge of the C3 coronagraph images recorded SOHO's Large Angle Spectrometric Coronagraph (LASCO) instrument.

As it neared the Sun over the next day or so, the smudge became increasingly elongated, ultimately hinting that it may be two comets pretending to be one! 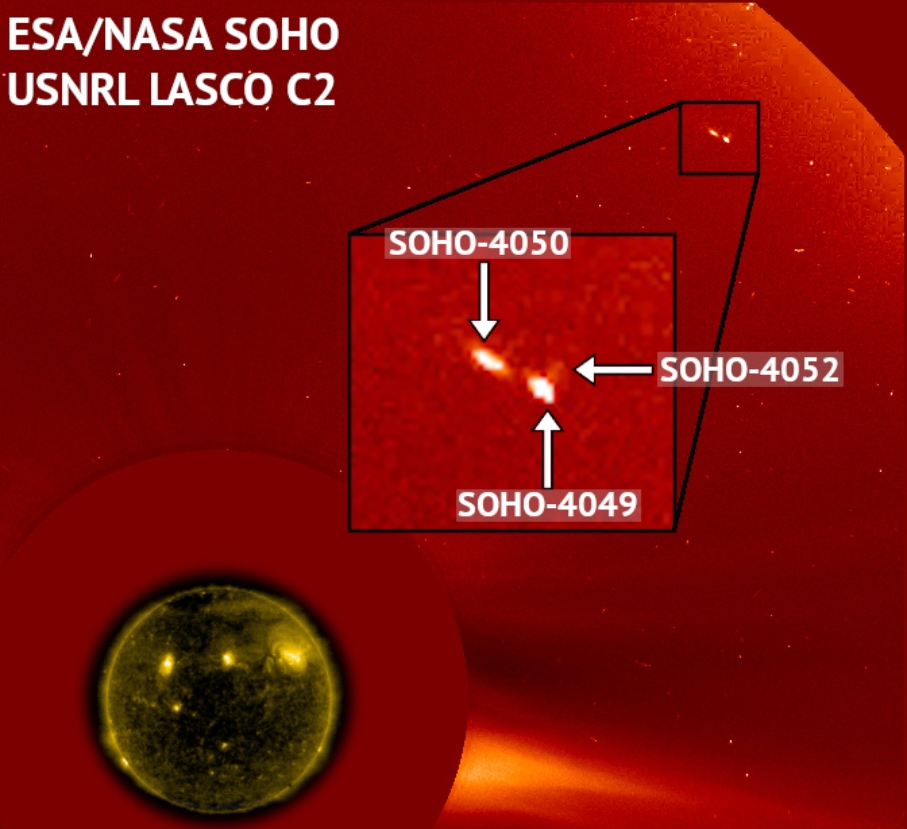 Since the observatory launched 25 years ago, the satellite has discovered more than 3 000 members of the family. According to NASA, only about four percent or around 175 comets spotted by the satellite are not part of the sungrazers.

"Its orbit doesn't match. We're not yet sure where it came from," he said, also pointing out that the brightness is fading. This indicates that the comets will soon disappear.

"Unfortunately, the prognosis for small fragmenting comets like this is not good. This was probably this comet's first and last pass by the sun, as it has likely now crumbled away entirely. But SOHO will continue to keep watching the sun, and waiting for our next special cometary offering to come along."