Earlier on May 9, 2013, SDO captured a large prominence eruption off the southwest limb. A Coronal Mass Ejection (CME) is visible in the latest STEREO Ahead COR2 imagery as well in the both SOHO’s LASCO coronographs. This CME is directed away from Earth.

Sunspot 1734 is now located in the southwest quadrant and is crackling with C-class flares. Sunspots 1732, 1734 and 1736 are each rotating towards the southwest limb and will all be out of direct Earth view May 12, 2013. Meanwhile, three new regions rotated into view off the east limb and were numbered 1742, 1743 and 1744. Regions 1740 and 1741 continued to decay and are now spotless plages. Currently, there are 8 numbered active regions on the visible side of the Sun. 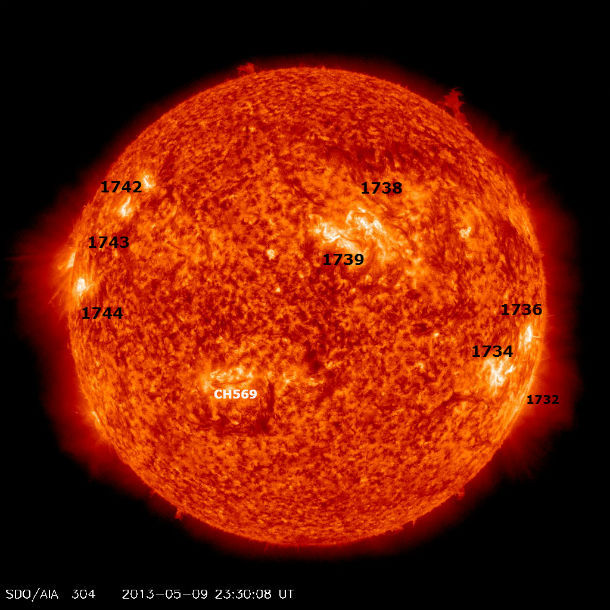 NOAA/SWPC forecasters estimate 35% chance of M-class events in the next 24 hours. Geomagnetic conditions remain quiet. The solar wind speed remains elevated (around 500 km/s) due to the influence of a coronal hole.