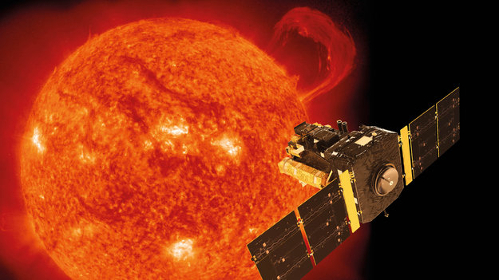 When SOHO launched on December 2, 1995, it traveled about 1.6 million km (1 million miles) from the Earth towards the Sun to study our parent star's interior, solar wind and mysterious heating of solar atmosphere.

Today, 20 years later and after numerous extension to the mission, scientists in both NASA and ESA have gained invaluable knowledge about the Sun and it's behavior. Now SOHO serves the objective of monitoring space weather and predicting dangerous solar storms.

"SOHO changed the popular view of the Sun from a picture of a static, unchanging object in the sky to the dynamic beast it is," said Bernhard Fleck, ESA SOHO project scientist at NASA's Goddard Space Flight Center in Greenbelt, Maryland.

The concept of space weather wasn't understood well enough when SOHO was launched. By now, space weather is being defined as events or conditions stemming from the Sun that affect any space-borne or ground-based technology therefore influencing human life and endeavors.

Thanks to SOHO’s coronagraph, a type of camera that uses a solid disk to block out the bright face of the Sun to better observe the comparatively faint solar atmosphere, known as the corona, we now know that giant clouds that burst off the Sun called coronal mass ejections, or CMEs, are a major piece of the space weather puzzle. Though two space-based coronagraphs preceded the one on SOHO, neither provided the same quantity or quality of observations.

Since 1995, SOHO has registered and studied more than 20 000 CMEs, pinpointing their sources on the Earth-facing hemisphere of the Sun, determining CME speed and direction up to three days prior to CME hits Earth. "It helps us to understand CMEs and offers the unique ability to remotely sense the region of space that connects our star to our planet and to the Solar System," said Fleck.

"Many faint CMEs had escaped notice on older coronagraphs," said Joe Gurman, US project scientist for SOHO at Goddard. "In light of the SOHO data, we realized CMEs are much more common and more variable throughout the solar cycle, than we thought."

CMEs themselves are huge electrified solar material clouds, which can cause geomagnetic storms if they collide Earth's magnetic field. They can wipe out power grids, cause disturbances in communications and GPS systems, but also offer auroras to behold. "Thanks to SOHO, there's a growing public recognition that we live in the extended atmosphere of magnetically active star," said Gurman. "And people realize that solar activity can affect Earth."

But SOHO’s coronagraph wasn’t the only game-changing instrument.

Before SOHO launched, carrying the Extreme ultraviolet Imaging Telescope (EIT), the only cameras taking images of the Sun in extreme ultraviolet light – which Earth’s atmosphere blocks, making it impossible to observe from the ground – were on suborbital sounding rockets, which collect data for only minutes at a time.

“For the first time ever, we saw waves rippling across the Sun at a million miles an hour in extreme ultraviolet light,” said Alex Young, a space scientist at Goddard.

These tsunamis on the solar surface – still known by many as EIT waves, after the instrument that first observed them – happen in close conjunction with CMEs. Before the discovery of solar tsunamis, scientists often had no way of knowing if a CME was heading directly toward or directly away from Earth, since all CMEs on the Earth-Sun line simply appear in coronagraph images as a giant halo around the Sun.

This animation shows a solar tsunami—also known as an EIT wave, after SOHO’s Extreme ultraviolet Imaging Telescope, which took the first images of these events—expanding out from an active region just after a solar flare on July 14, 2000. Solar tsunamis, which often happen in conjunction with coronal mass ejections, or CMEs, gave scientists the first clues as to whether halo CMEs – which spread out all around the sun in coronagraph images—were heading directly toward or away from Earth. Image credit: ESA/NASA/SOHO

In addition to investigating how the Sun works, SOHO is the most prolific comet discoverer, having revealed more than 3 000 comets as they endured their fiery encounter with the Sun.

The great thing about SOHO comet finding project is that it relies on the people who are interested in going through the data. This task is open to the public and available online in near-real time. Thus, about 95% of SOHO's comets have been spotted by these citizen scientists. 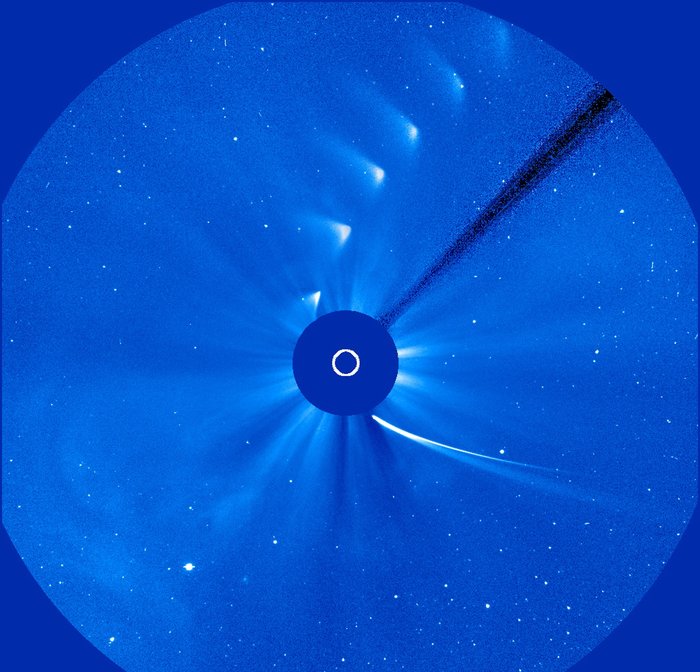 A less know fact is that we almost missed out on this and SOHO’s other discoveries.

In 1998, the spacecraft was lost for four months because of a software error. A joint ESA/NASA team was finally able to recover the spacecraft in September 1998, in part using the giant Arecibo radio telescope to locate the spacecraft and reestablish command. This rescue was crucial for heliophysics, as much of SOHO’s scientific success can be attributed to its 20 years of near-constant observation.. "I feel very fortunate to have worked on this fantastic mission for over 20 years, as part of a team of incredibly talented and dedicated engineers and scientists working in industry, NASA, ESA and at research labs and universities around the world," said Bernhard Fleck.

"I tip my hat to all the engineers and scientists, who designed and build this durable spacecraft and superb instruments and to my colleagues, who have operated them over all these years, analysed the data and taught us all the new science we learned from the measurements," added Fleck.

"We have had a fantastic ride, but it certainly isn't over yet."