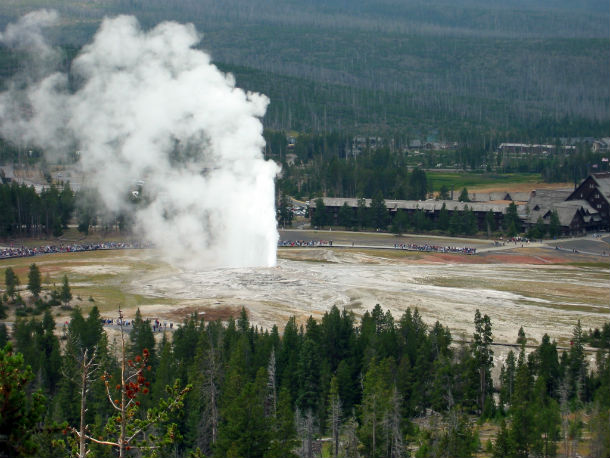 A new study of the Yellowstone National Park geyser shows that the underground plumbing of the Old Faithful looks like a bagpipe. Scientists report, in study published online March 30, 2013 in the journal Geophysical Research Letters, that a big chamber is positioned about 15 meters (50 feet) underground, located southwest of Old Faithful.

The research presents another strong argument against the long-standing idea that big geysers erupt from long, narrow tubes. The researchers who uncovered new evidence of a chamber suspect that it stores the pressurized near-boiling water, steam, and other gases that propel Old Faithful’s eruptions

Old Faithful got its name because of its regular eruptions, which occur every 92 minutes on average. Almost immediately after an eruption, there’s a 15-minute recharge period with low water levels. After that for about 50 minutes, water levels rise and seismic activity increases. The cavern never fully empties, but as steam bubbles fill it, they can oscillate water in the conduit, eventually producing a strong steam explosion. This bubble trap is what makes Old Faithful splash with smaller eruptions before releasing its full force. 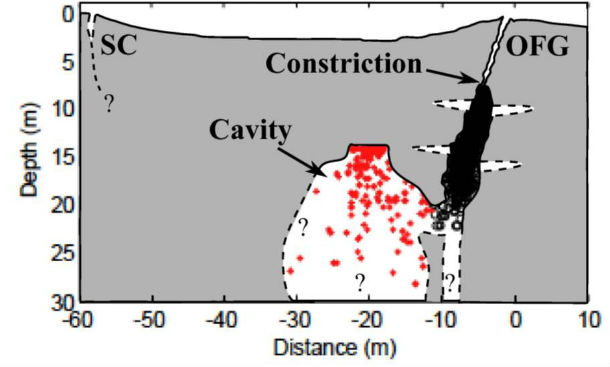 The graph of Old Faithful Geyser  shows the estimated shape of a subterranean cavity beneath the geyser (Credit: GeoSpace )

The egg-shaped cavern is least 15 m (50 feet) tall and 18 m (60 feet) wide, although its size can’t be precisely determined. It is connected to a pipe at the angle of about 24 degrees that feeds Old Faithful’s maw. Now, for the first time, experts have a clear picture of the underground workings of The Old Faithful.

Using tiny tremors extracted from seismic records collected in the 1990s researchers were able to reveal the shape of the void and geyser conduit. Additionally, the tremors can also track water.

Jean Vandemeulebrouck, a geophysicist at the University of Savoie in France, said that they were able to locate with one- to two-meter precision the place where the boiling occurs, and that they can see the water rising in the conduit. 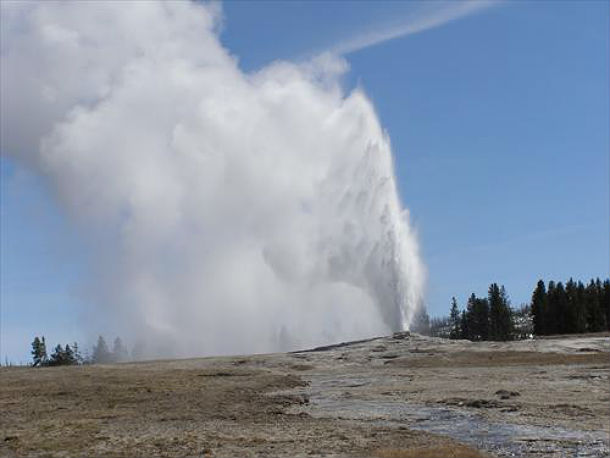 Photograph of the Old Faithful Geyser erupting in Yellowstone National Park. Old Faithful was named in 1870 during the Washburn-Langford-Doane Yellowstone expedition and was the first geyser in the Park to be named. (Source: USGS)

Scientists working in Kamchatka’s Valley of the Geysers concluded that those Russian geysers also erupted from conduits fed by caverns. They also found out that the geysers explode because of underground bubble traps, as is with Old Faithful.

There are only about 1,000 geysers around the world. For the formation of the geyser, there must be plentiful groundwater, a volcanic heat source to warm the water, open spaces so the water can escape and a way to trap bubbles.

Vandemeulebrouck, in collaboration with the U.S. Geological Survey, is now studying another Yellowstone National Park geyser, called Lone Star, and the preliminary results they acquired are similar to Old Faithful. His opinion is that this oscillating system is quite common in geysers.