It's been an eventful month for seismic activity in the western United States, with a M5.7 earthquake near Salt Lake City, Utah, on March 18, and a M6.5 in central Idaho on March 31, the Yellowstone Volcano Observatory said in their monthly update released April 1, 2020, at 18:39 UTC.

These earthquakes are caused by tectonic extension of the region and are not related to Yellowstone, nor will they have a significant impact on the Yellowstone system, YVO added.

Some strong earthquakes in the region, like the 1983 M6.9 Borah Peak, ID, and 1959 M7.3 Hebgen Lake, MT, earthquakes, have impacted geyser behavior, but that is due to the response of the shallow and fragile geyser conduits to shaking.

It is not yet clear if the M6.5 in central Idaho will have a similar impact; observations of geyser activity over the coming days to weeks will answer that question.

Steamboat geyser, in Norris Geyser Basin, experienced three water eruptions in the past month, on March 6, 15, and 25, bringing the total number of eruptions for the year to nine.

During March 2020, the University of Utah Seismograph Stations located 111 earthquakes in the Yellowstone National Park region. The largest event was a minor earthquake of magnitude 3.1 located 8 km (5 miles) NNW of West Yellowstone, MT, on March 31 (LT). 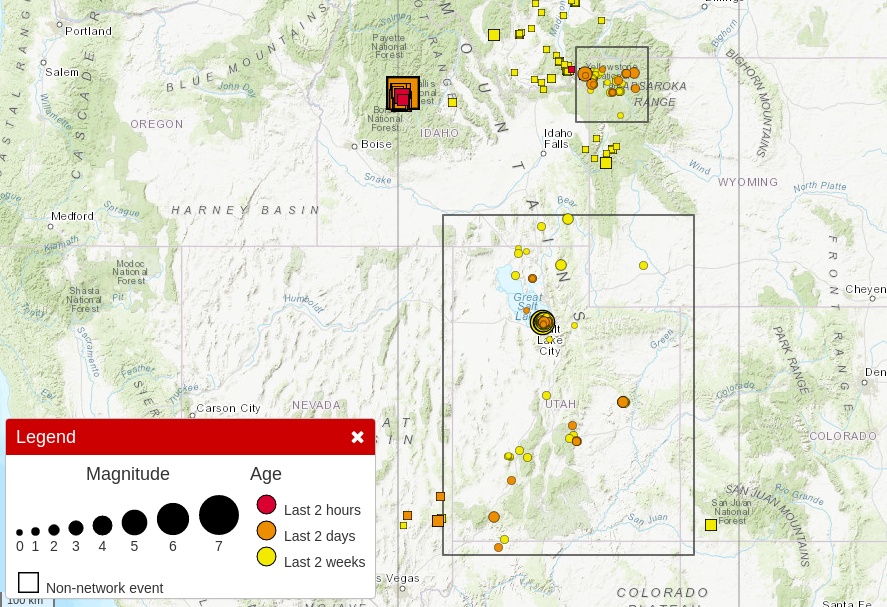 Seismicity in Yellowstone during the month of March included two earthquake swarms:

1) The largest earthquake swarm occurred about 11 km (7 miles) ENE of West Yellowstone, MT, from March 21 to 29 and included 19 earthquakes ranging in magnitude from 0.0 to 2.1. The largest swarm event occurred on March 28.

Earthquake sequences like these are common and account for roughly 50% of the total seismicity in the Yellowstone region.

The overall deformation style and rate at Yellowstone remain unchanged since the March 1 update.

Subsidence of Yellowstone caldera, which has been ongoing since 2015, continues at an average rate of 2 – 3 cm (about 1 in) per year with minor fluctuations related to seasonal changes.