An international team of researchers found evidence that rainforests once existed in West Antarctica.

The mid-Cretaceous time period, from circa 115 million to 80 million years ago, is considered the warmest period in the past 140 million years. Sea surface temperatures during that time were possibly as hot as 35 °C (95 °F), and the ocean level was 170 m (558 feet) higher than the present.

In a sediment ice core acquired in the Amundsen Sea in West Antarctica in February 2017, researchers found a preserved forest soil from the Cretaceous period, which included plant pollen and spores, as well as a network of roots.

The core was collected with the University of Bremen's seafloor drill rig near the Pine Island Glacier on an RV Polarstern expedition. This evidence gave the team the first opportunity to simulate the West Antarctic climate during the warmest interval of the Cretaceous.

"It clearly differed from the layers above it. Moreover, the first analysis indicated that, at a depth of 27 to 30 meters below the ocean floor, we had found a layer originally formed on land, not in the ocean," he continued. 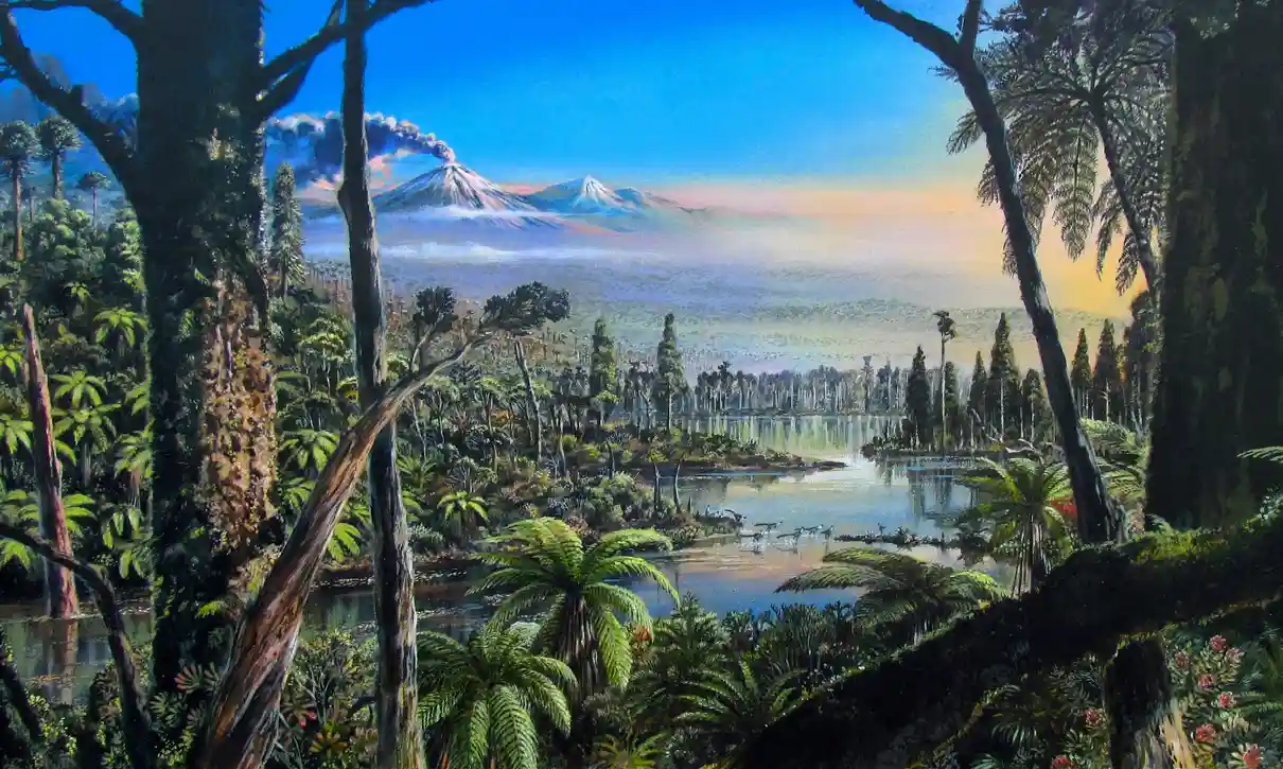 Artist's impression of rainforest in Antarctica between 92 and 83 million years ago. Image credit: James McKay

The core was subjected to CT scans, and the images revealed a dense network of roots that spread across the entire soil layer of fine clay and silt. They were so well-preserved that the researchers could make out individual cell structures.

The soil sample also contained traces of pollen and spores from different vascular plants, including the first remains of flowering plants ever discovered at these high latitudes in the Antarctic.

"The numerous plant remains indicate that 93 to 83 million years ago the coast of West Antarctica was a swampy landscape in which temperate rainforests grew– similar to the forests that can still be found, say, on New Zealand's South Island," said co-author professor Ulrich Salzmann, also a palaeoecologist at the Northumbria University.

"To get a better idea of what the climate was like in this warmest phase of the Cretaceous, we first assessed the climatic conditions under which the plants' modern descendants live," Klages explained. Researchers then looked for biological and geochemical temperature and precipitation indicators in the sample.

The findings showed that around 90 million years ago, there was a temperate climate roughly 900 km (559 miles) from the South Pole. The mean air temperature yearly was 12 °C (53.6 °F), indicating that the South Pole temperatures during the Cretaceous period were only around 2 °C (3.6 °F) warmer than Germany's present mean temperature.

The researchers used the information about the vegetation, temperature, ad precipitation as target values to simulate the climate during the mid-Cretaceous.

"Before our study, the general assumption was that the global carbon dioxide concentration in the Cretaceous was roughly 1 000 ppm. But in our model-based experiments, it took concentration levels of 1 120 to 1 680 ppm to reach the average temperatures back then in the Antarctic," said co-author professor Gerrit Lohmann, a climate modeler at the Alfred Wegener Institute Helmholtz Centre for Polar and Marine Research (AWI). 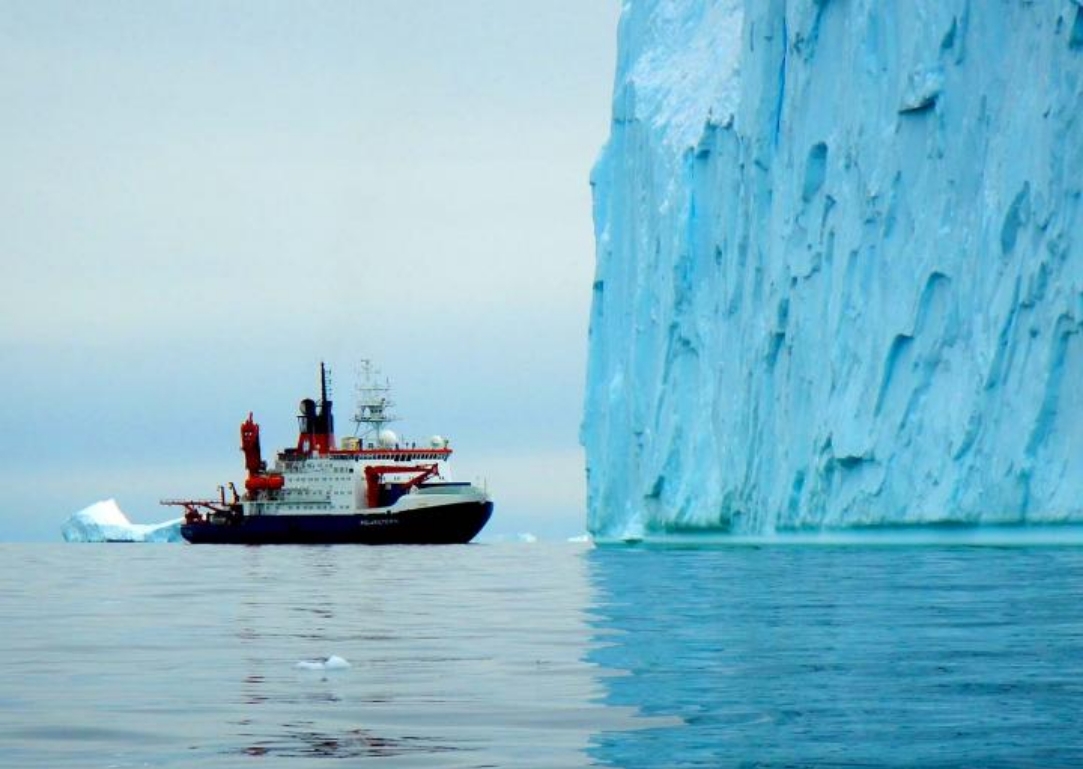 The study also shows both the massive amount of greenhouse gas carbon dioxide and how important the cooling effects of ice sheets are, particularly in the present time.

"We now know that there could easily be four straight months without sunlight in the Cretaceous. But because the carbon dioxide concentration was so high, the climate around the South Pole was nevertheless temperate, without ice masses," said co-author Dr. Torsten Bickert, a geoscientist at the University of Bremen's MARUM research center.

Meanwhile, Lohmann said the simulations "haven't yet provided a satisfactory answer" as to what caused the climate to dramatically cool that ice sheets formed again following Antarctic's warmer period. The answers are now a major challenge for the international climate research community.

The mid-Cretaceous period was one of the warmest intervals of the past 140 million years1,2,3,4,5, driven by atmospheric carbon dioxide levels of around 1,000 parts per million by volume6. In the near absence of proximal geological records from south of the Antarctic Circle, it is disputed whether polar ice could exist under such environmental conditions. Here we use a sedimentary sequence recovered from the West Antarctic shelf—the southernmost Cretaceous record reported so far—and show that a temperate lowland rainforest environment existed at a palaeolatitude of about 82° S during the Turonian–Santonian age (92 to 83 million years ago). This record contains an intact 3-metre-long network of in situ fossil roots embedded in a mudstone matrix containing diverse pollen and spores. A climate model simulation shows that the reconstructed temperate climate at this high latitude requires a combination of both atmospheric carbon dioxide concentrations of 1,120–1,680 parts per million by volume and a vegetated land surface without major Antarctic glaciation, highlighting the important cooling effect exerted by ice albedo under high levels of atmospheric carbon dioxide.