Salt Lake City in Utah, U.S. was hit by an M5.7 earthquake on March 18, 2020– the largest since M5.9 near St. George in 1992. Following the event, seismologists from the University of Utah began closely examining hundreds of aftershocks to learn more about the tremor, investigate its 'virtually unknown' fault, and assess the severity of future jolts.

The fault that is believed to have moved along the Oquirrh Mountains' eastern base is virtually unknown, providing a chance for experts to image it. However, all 210 of the university's portable seismographs were deployed along California's San Andreas fault and other places.

As a solution, seismologist Amir Allam from the university, along with his colleagues, gathered dozens of geophones from other institutions and started installing them near the epicenter of the initial tremor– a fault that is yet to be figured out by other professionals in the field.

The team aims to distinguish the fault, and how it is interconnected with the Wasatch fault running across the base of the hillocks on the city's east side, and its network of associated faults or strands.

By the late 1980's, scientists from the USGS, the Utah Geological Survey, the University of Utah, and other cooperating institutions had learned that the Wasatch Fault is made up of several segments, each of which can independently produce earthquakes as powerful as magnitude 7.5; during the past 6 000 years, a strong earthquake (magnitude greater than 6.5) has occurred about once every 350 years somewhere along the Wasatch Fault; the urban areas of Salt Lake City, Ogden, and Provo lie on soft lake sediments that will shake especially violently during large earthquakes; an earthquake on the Wasatch Fault could severely damage gas, electric, water, communication, and transportation lifelines, crippling these urban areas. 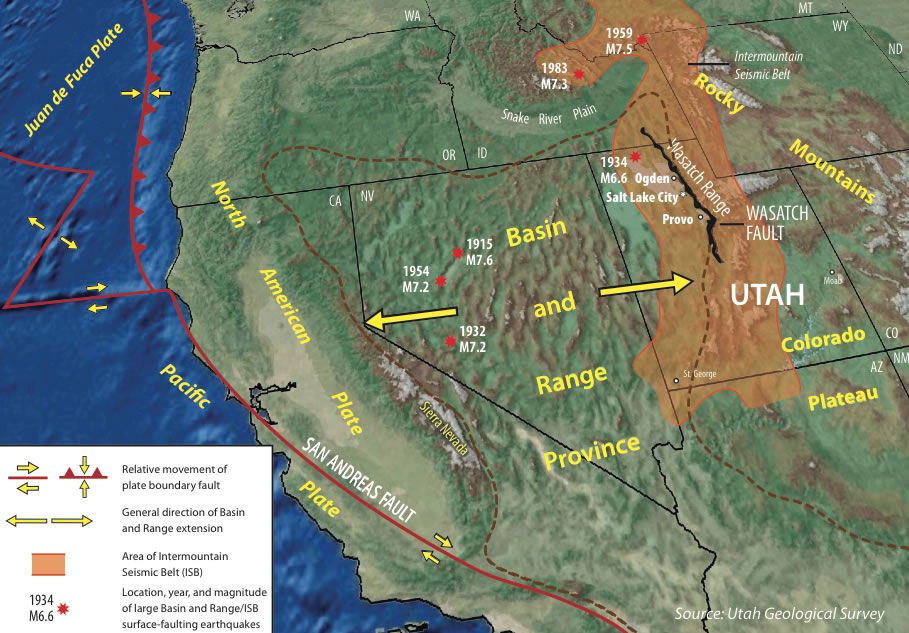 Although no powerful earthquake has occurred on the Wasatch Fault for the past 150 years, future such events are certain. USGS 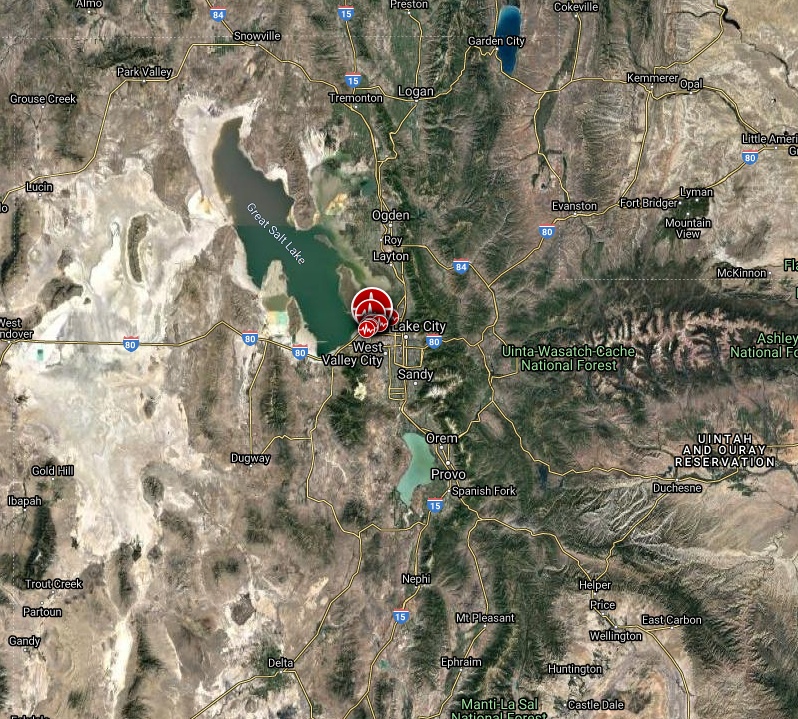 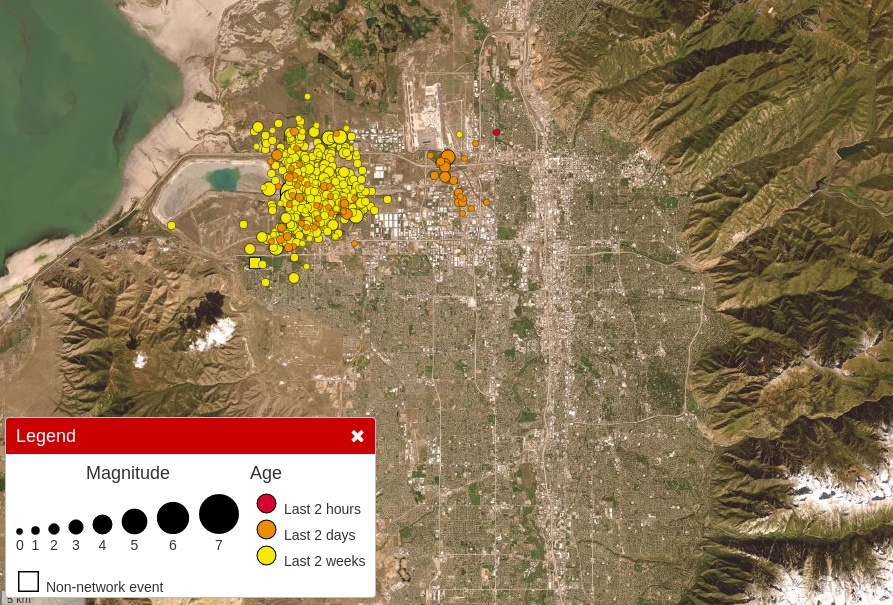 "We want to map out the basin depth all over the valley. We actually don’t know it [the fault network] that well," said Allam.

"We want to capture as many tiny aftershocks as we can, so we have a really dense deployment around the epicenter of the [M5.7] quake. We want to get that fault structure. We want to know exactly how the Wasatch and its subsidiary faults are changing their patterns in the subsurface."

In the west, the faults go deeper underground but are not manifested on the surface, giving less information to researchers.

"The jury is still out on the specific fault that moved and produced [the March 18] earthquake," Ryan Gold, a research geologist with the U.S. Geological Survey, stated. "The specific strand, that’s what we are trying to sort out. Additional instrumentation is being installed to monitor ongoing seismicity."

A week after the main tremor, the ground under Magna has kept trembling. As of Tuesday, March 24, at 22:00 UTC (16:00 LT), new data showed that more than 435 aftershocks occurred in Magna.

At least 29 of these were M3+, while some surpassed M4. The fault released an M3.1 quake on Tuesday morning, followed by more that are stronger than M2. 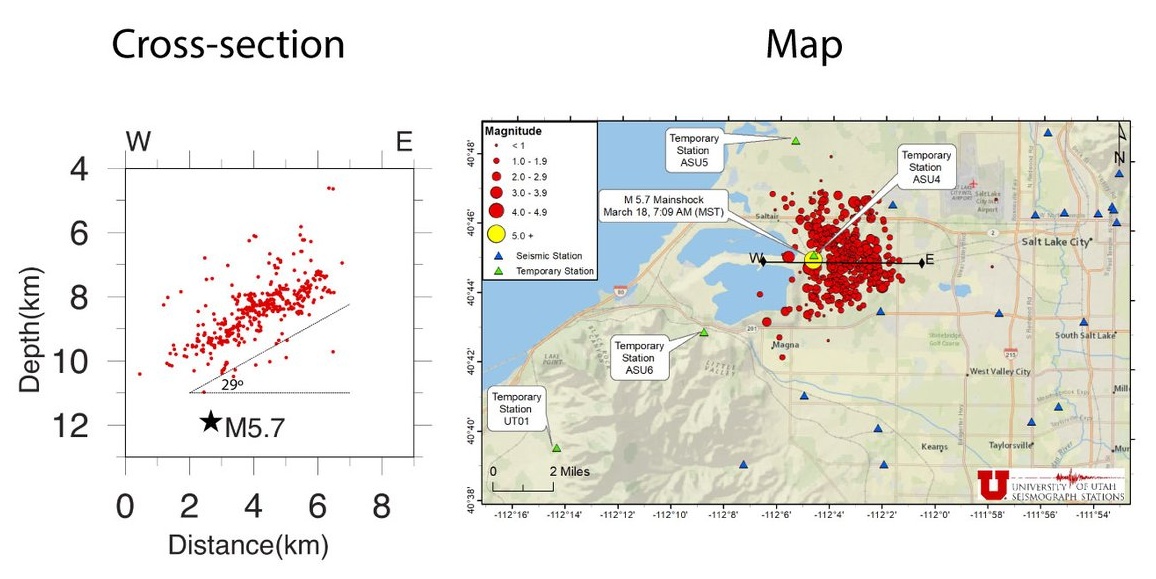 Relocations of the aftershocks from March 18 through March 24 indicate that the Magna earthquake ruptured a west dipping fault, which is part of the Wasatch Fault system. The cross-section shows the location of the mainshock and aftershocks,  if you were to force them all onto west-to-east line located at W-E as shown on the map. Credit: UUSS

"The number and size of aftershocks are going to diminish with time but within these sequences. It’s the fault adjusting to the changes in stress. They are kind of chattering," said Kris Pankow of the University of Utah Seismograph Stations. "With time, that stress is going to dissipate."

Satellite imagery indicated that the ground moved a few centimeters at the surface following the main quake. Three days after that, dozens of aftershocks happened, becoming weaker and less frequent until Sunday, March 22, an M4 tremor hit and was followed by aftershocks.

"That magnitude 4 was its own stress release; it has its own set of aftershocks to go with it," Panko stated. "We might have some more magnitude 4s before this is all done."

Allam and his colleagues will retrieve 182 geophones around the valley in a month, hoping that the findings will yield plenty of information about what's beneath the surface of Utah's most populous area.

Will this delay or trigger “the big one?” No, small earthquakes do not relieve enough stress in the earth to reduce the likelihood of a large earthquake. We are still at risk of a magnitude 7-7.7 earthquake (the “Big One”) occurring somewhere along the Wasatch fault. 1/2 pic.twitter.com/L0t8zVN84g