A study of jets travelling through the Sun’s corona at speeds between 200-500 km/s has shown that the fast-moving columns of plasma are deflected much more strongly by the Sun’s magnetic field in the northern hemisphere than in the southern hemisphere. A north-south asymmetry would have profound implications on our understanding of the solar dynamo that generates the Sun’s magnetic field.

Dr. Giuseppe Nisticò from the University of Warwick (UK) and an international team of researchers have studied 79 polar jets occurring between March 2007 and April 2008 that were observed with the Solar TErrestrial RElations Observatory (STEREO). STEREO consists of twin spacecraft that are drifting away from Earth along its orbital path around the Sun in opposite directions. STEREO’s duplicate set of instruments carried by the two spacecraft allows stereoscopic observations of the Sun. Nisticò and his colleagues used images from the Extreme Ultra-Violet Imager (EUVI) and CORoronagraphs (COR) instruments to look for jets observed simultaneously by both STEREO spacecraft. For each jet identified, they measured the angle between jet and the north-south axis of the Sun, both at the surface and at a distance of about 700 000 kilometres.  The time delay between the two measurements amounts to about 10 minutes.

“The STEREO instruments allow us to probe into different layers of the Sun, so we can see the jet’s progress over time. EUVI shows us the jet emerge at the surface of the Sun and COR1 shows its progress through the Sun’s atmosphere, or corona,” explained Nisticò.

“As the jets travel from the lower to the higher corona, they are “guided” by the magnetic field lines and follow a curved, rather than a straight path. However, our analysis of jets near the Sun’s poles showed surprisingly that the amount of this deflection is different. We saw significantly larger deflection in the north pole than in the south. So a natural question arises: are these polar jets showing us the signature of a north-south asymmetry  of the solar magnetic field?” 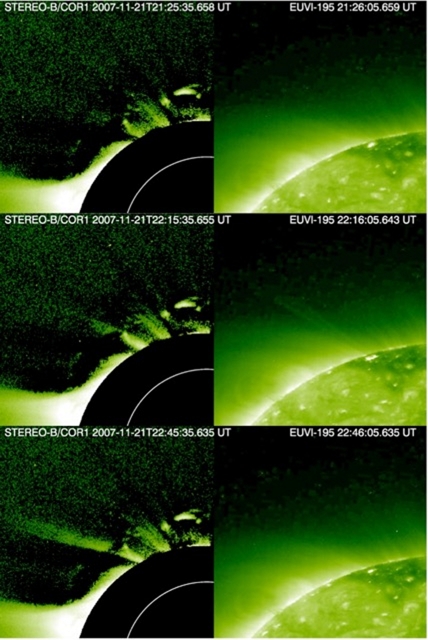 This coronal jet near the Sun’s north pole occurred on 21st Nov 2007 and was observed from STEREO-B with EUVI (right) and COR1 (left). A bright point in EUVI image shows the plasma jet emerging at the surface of the Sun. The jet appears in the CORI images after a time-lag of approximately 10 minutes The deflection of the jet along magnetic field lines can clearly be seen in the COR1 (left-hand) images. Credit: STEREO/NASA/G. Nisticò/ U. Warwick.

For a smaller number of jets, the team studied the deflections in three dimensions, and found these confirmed the results of the wider two-dimensional study.

“For the first time, despite the difficulty in doing measurements of features in polar regions from spacecraft orbiting on the ecliptic plane, we have been able to use coronal jets as a tracer of the global structure of the solar corona and provide a further independent indication of the existence of the north-south asymmetry. In future, Solar Probe Plus and Solar Orbiter missions will provide new insights on the north-south asymmetry at by studying greater distances from the Sun and through direct observations of the Sun’s poles”.