Astronomers at the Open University have discovered the first quintuple star system containing two eclipsing binary stars. While scientists think that about a third of stars are found in pairs or multiple systems, to find five stars connected to each other is very rare.

The unusual star system was originally detected in archived data from the SuperWASP (Wide Angle Search for Planets) project, which uses relatively small and low-cost cameras in the Canary Islands and South Africa to image almost the whole sky every few minutes.  Over many years, its measurements of the brightness of individual stars have been assembled into light curves – plots of brightness against time – for some 30 million sources in the Milky Way.

Regular small dips in a light curve can reveal the presence of planets orbiting other stars, when they cross or transit the face of their host star, and SuperWASP has been extremely successful in finding these ‘exoplanets’ since it began operating in 2003. Light curves can also be used to discover eclipsing binary stars, where a pair of stars orbit around their mutual centre of gravity in our line of sight. 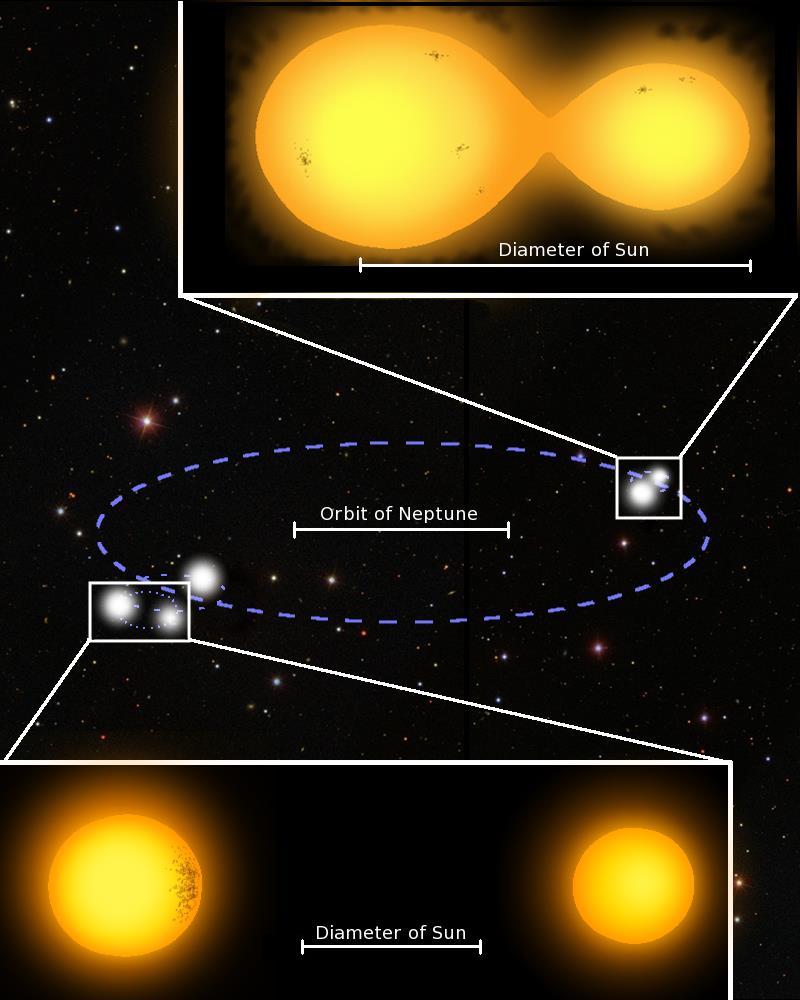 An artist’s impression of the five star system 1SWASP J093010.78+533859.5. The smaller orbits are not shown to scale relative to the larger orbit, as the binary components would be too close together to distinguish. The inset images are to scale, along with an image of the Sun for comparison. The blue dotted line marks the orbital path of the two pairs of stars. The fifth star, whose position is uncertain, is to the right of the left pair. Credit: Marcus Lohr.

From the Earth, each star will pass in front of its companion once in every orbit and eclipse some or all of its light. This produces a regular pattern of pairs of dips in the binary's light curve, whose depths and shapes are characteristic of the physical properties of the two stars.

The light curve of the new quintuple system, designated as 1SWASP J093010.78+533859.5, initially revealed the presence of a contact eclipsing binary – a system in which the two stars are orbiting so close together that they share an outer atmosphere. Contact binaries are quite common, but this particular system is notable because its orbital period – the time the two stars take to complete one orbital cycle – is so short, just under six hours.

Then it was spotted that the light curve contained some additional unexpected eclipses, and the data were reanalysed to reveal a second eclipsing binary at the same location on the sky.  The new binary is detached – its component stars are well-separated by a distance of about 3 million km, or about twice the size of the Sun – and it has a longer orbital period of one and a third days.

The two sets of stars are separated by about 21 billion km, rather larger than the size of Pluto’s orbit around the Sun. The four stars were subsequently observed spectroscopically – its light was broken up into different wavelengths – so that the signatures of the different stars could be studied in detail. This unexpectedly revealed the presence of a fifth star, up to 2 billion km away from the detached binary, but not apparently producing any additional eclipses.

By combining the data from the five stars' light curve and their spectra, the Open University researchers have been able to confirm that they are all gravitationally bound together in a single system, around 250 light years away from us in the constellation of Ursa Major. The data also let the team determine properties of the stars like their masses, sizes and temperatures.  All the stars are rather smaller and cooler than our Sun, but the collective system is bright enough (9th magnitude) to be visible in small telescopes and amateur astronomers could see the eclipses for themselves.

Dr Marcus Lohr of the Open University comments: “This is a truly exotic star system. In principle there’s no reason it couldn’t have planets in orbit around each of the pairs of stars. Any inhabitants would have a sky that would put the makers of Star Wars to shame – there could sometimes be no fewer than five Suns of different brightnesses lighting up the landscape. Days would have dramatically varying light levels as the different stars were eclipsed. They would though miss out on night for a large part of their ‘year’, only experiencing darkness (and a night sky) when the stars were on the same side of their world.”

One particularly interesting finding is that the two binaries seem to be orbiting in the same plane.  This suggests that they may have originally formed from a single disk of gas and dust, which broke up as gravity concentrated it into clumps.  Studying this bizarre system will help astronomers to better understand how stars and planets, including our own, came into being.

Details of the five star system, the first of its kind to be found, will be presented by Marcus Lohr of the Open University in a talk on Wednesday, July 8 at the National Astronomy Meeting at Venue Cymru, Llandudno, Wales.