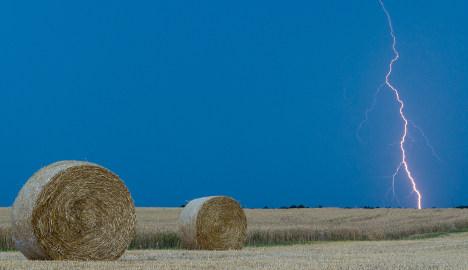 After more than a week of blazing temperatures rushing over 40°C (104ºF), Germany was ravaged by hailstorms, flash floods and tornadoes. The severe meteorological phenomena on July 7, 2015 has done extensive damage to infrastructure, leaving thousands of households without electricity and causing more than 10 million Euros worth of damage.

However, after over a week of boiling hot conditions, Germany was hit by hailstorms, flash floods and tornadoes. On Tuesday evening, July 07, severe thunderstorms rose from the south and covered the whole country.

A strong tornado caused a damage of €8-10 million to the town of Framersheim in Rhineland-Palatinate. The heavy storm ripped of several house rooftops and caused damage to about 100 houses.

Some damage was also done to the rail lines, the Deutsche Bahn reported, as trees and falling branches were blown onto the electrical lines by strong winds. A lightning striking an apartment block in Hessisch Lichtenau in Hesse caused a €150 000 worth of damage.

1 800 household were cut off the power supply in Saxony-Anhalt, the fist-sized hail stones were falling in Kelbra, and hurricane force winds were reported in the Bavaria province.

On July 08, "Deutscher Wetterdienst" reported the cold front of a low pressure system over southern Scandinavia was passing over the Alps from southeast, drawing a west-southwest flow of heated air of polar origin to Germany.

The inland wind should somewhat decline by Thursday night, although the wind speeds are still expected to reach 85 km/h (52.8 mph) on coasts. Isolated thunderstorms are expected in the central parts of the country.

In the past week Europe experienced an extended period of dry and extremely hot weather and light wind, as it was locked under the so-called "omega block" weather pattern.