Severe thunderstorms swept over parts of France, Benelux and Germany on June 4, bringing wind gusts in excess of 100 km/h (62 mph).

At this point, the worst affected appears to be the city of Bocholt where a suspected tornado touched down late June 4, overturning at least one car and damaging others, uprooting about 100 trees and damaging at least 9 houses. One person was slightly injured, the city spokesman said.

Although some experts and news portals are already reporting an EF-2 tornado, the German Weather Service (DWD) is still analyzing the data.

Strong and destructive tornadoes are not unusual in this part of Germany.

Another round of severe thunderstorms is expected to hit the region Wednesday night, June 5.

Widespread convective storms are expected within the strongly unstable and moderately sheared environment ahead of the front. Similar to a day before, scattered supercell storms initiation is likely during the mid-afternoon hours. A favorable LL shear and helicity should again develop threat for tornadic storms as well. Storms will likely merge into clusters with bowing segments towards the evening hours while spreading NNE-wards. 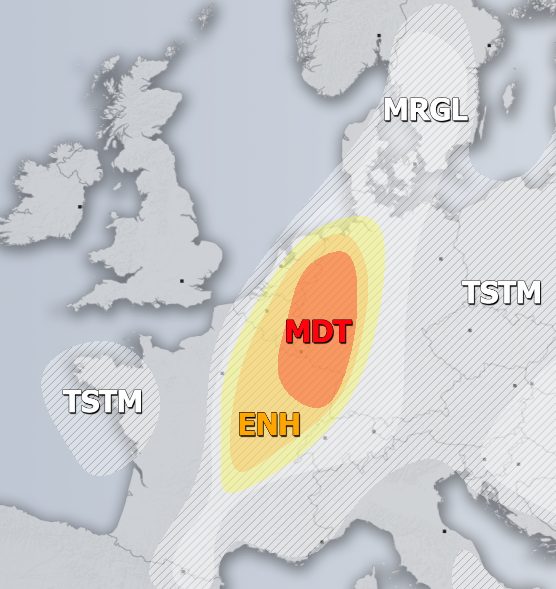 DWD meteorologist Andreas Friedrich said their analysis confirms a tornado hit the city of Bocholt. "It is the fifth tornado in Germany this year," he told CNN.

City authorities said it was a medium-strength tornado. A total of 9 houses were damaged and about 100 trees uprooted. Roof tiles were swirled around, windows and winter gardens damaged, and one car thrown 10 m (32.8 feet) in the air, they said.