Lava activity at Hawai'ian Kilauea volcano is confined to Halemaʻumaʻu with lava erupting from vents on the northwest side of the crater, the Hawaiian Volcano Observatory (HVO) reported at 19:11 UTC on January 5, 2021. Early January 5 (UTC), the lava lake was 191 m (627 feet) deep and perched above its edge. SO2 emission rates were still elevated.

Sulfur dioxide emission rate measurements made on January 3 were still in the range 3 000 – 6 500 t/d since December 27–the same range of values that were common for emissions from the pre-2018 lava lake, HVO said.

Geodetic monitors indicate that the upper portion of the East Rift Zone (between the summit and Puʻu ʻŌʻō) contracted while the summit deflated at the onset of this eruption (December 21, 2020). There is no seismic or deformation data to indicate that additional magma is currently moving into either of Kīlauea’s rift zones.

The west vents spattered from the top of a small cone plastered on the northwest wall of Halemaʻumaʻu crater.

On the morning of January 5 (HST), lava is flowing down a narrow channel to the lake and feeding a small dome fountain in front of the west vents probably from a submerged portion of the vent. 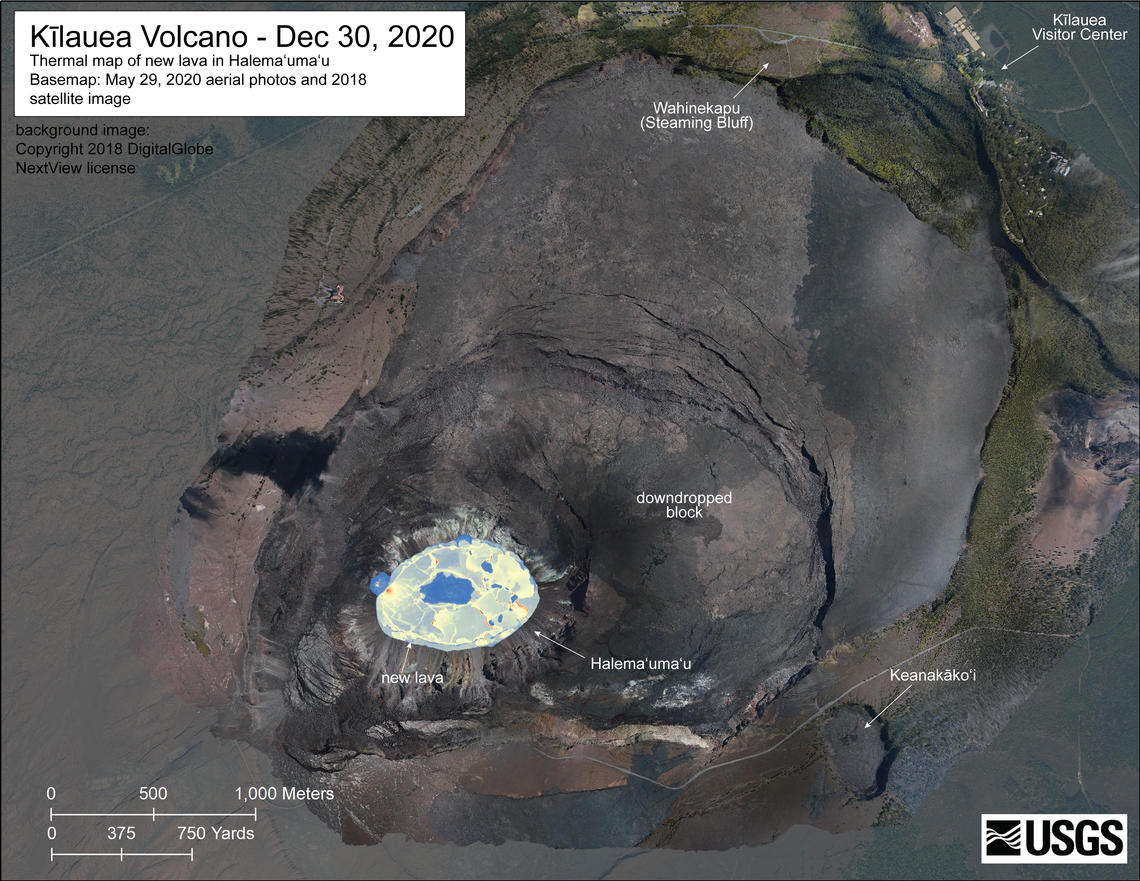 A helicopter overflight on December 30, 2020, at approximately 10:00 HST allowed for aerial visual and thermal imagery to be collected of the eruption within Halema'uma'u crater at the summit of Kīlauea Volcano. The scale of the thermal map ranges from blue to red, with blue colors indicative of cooler temperatures and red colors indicative of warmer temperatures. USGS map by M. Patrick.

The lake is now perched about 1 meter (3.3 feet) above its narrow edges as measured Sunday morning, January 3; overflows onto the narrow edge slowly elevated a low wall around the lake similar to the wall around an above-ground swimming pool.

The main island of cooler, solidified lava floating in the lava lake continued settling, mostly rotating counter-clockwise, in front of the west lava source filling the lake, while the 11 smaller islands moved a bit but remained in the east end of the lake.

Measurements Friday afternoon (HST, January 1) showed that the island surface was about 6 m (20 feet) above the lake surface.

High levels of volcanic gas, rockfalls, explosions, and volcanic glass particles are the primary hazards of concern regarding this new activity at Kīlauea’s summit.

As SO2 is released from the summit during this new eruption, it will react in the atmosphere with oxygen, sunlight, moisture, and other gases and particles, and within hours to days, convert to fine particles.

The particles scatter sunlight and cause the visible haze that has been observed downwind of Kīlauea, known as vog (volcanic smog), during previous summit eruptions.

Vog creates the potential for airborne health hazards to residents and visitors, damages agricultural crops and other plants, and affects livestock operations.

Rockfalls and minor explosions, such as the ones that occurred during the 2008-18 lava lake eruption at Kīlauea summit, may occur suddenly and without warning.

Pele's hair and other lightweight volcanic glass fragments from the lava fountains within Halemaʻumaʻu will fall downwind of the fissure vents and lava lake, dusting the ground within a few hundred meters (yards) of the vent.

From the west rim of the new summit collapse features 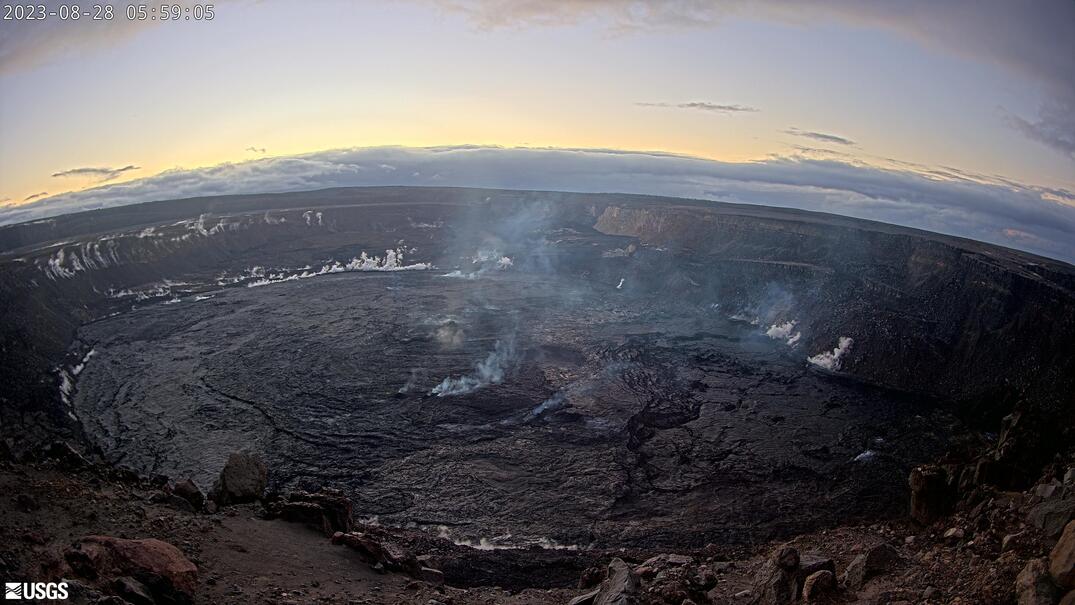 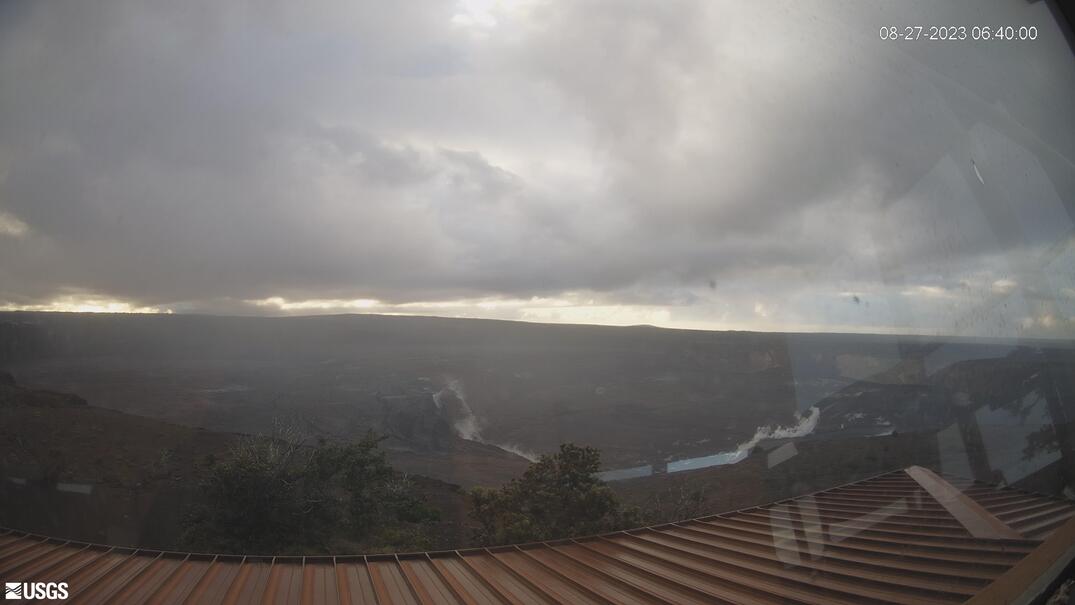 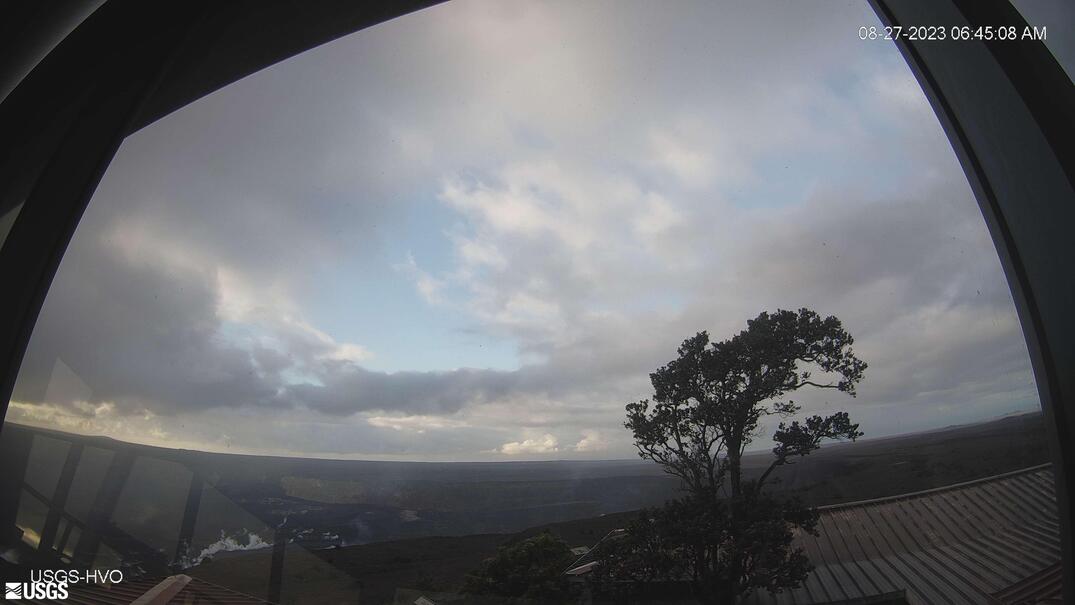 From the west rim of the new summit collapse features 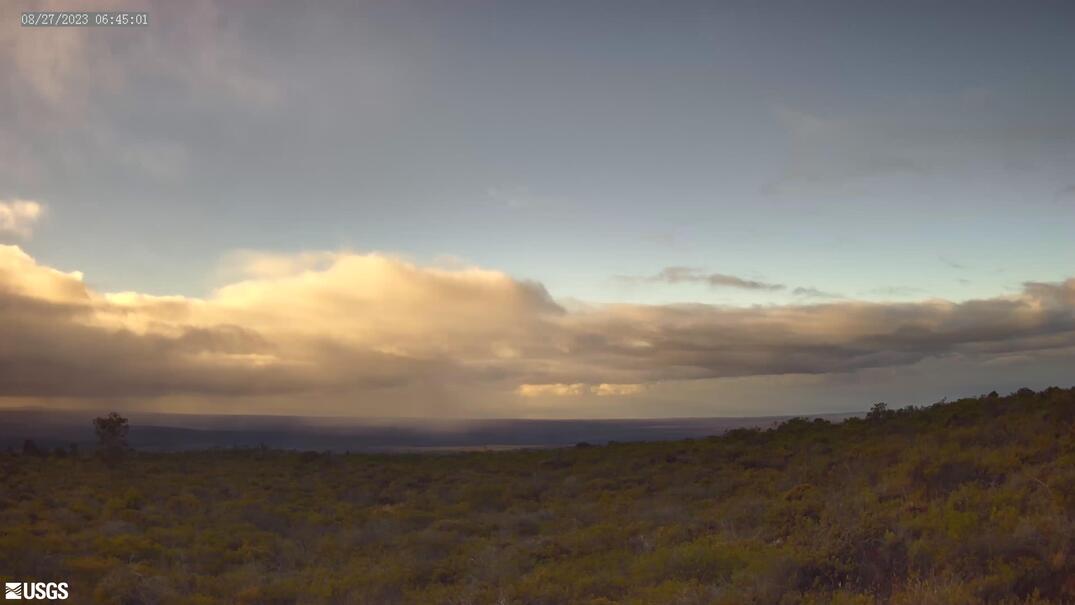