A powerful winter storm is set to blast Southeast Alaska with hurricane-force winds on Wednesday, January 6, 2021. New storms are expected to form in the days ahead, bringing severe winds, snow, and major waves to the region.

An ongoing La Niña is resulting in above-average cyclone activity over the North Pacific– much of the storms are gaining strength rapidly, moving towards the Aleutian Islands, Alaska mainland, or the Pacific Northwest.

On Tuesday, January 5, an impressive and deep extratropical storm has formed over the far North Pacific, just days after the most intense North Pacific storm on record hit the Aleutian Islands, which had a record low pressure of 921 hPa, Severe Weather Europe's Marko Korosec said.

The extratropical storm's large size and intensity have already peaked over the Gulf of Alaska, but its large size and strength remain powerful enough that its impact is significant for Southeast Alaska, as well as along the Pacific coast of Northwest U.S. and Canada.

The whole storm size is quite massive, so the wind field and high swell with significant waves are being produced. The highest waves are expected to reach up to 11 m (35 feet).

Further southwest of the system, a new rapidly intensifying extratropical storm is developing and is forecast to spread towards Southeast Alaska in the following days. This new system will bring another bout of excessive downpour and deep snow.

The secondary low's main threat is the powerful winds within the strong pressure gradient over the region, supporting additional dangerous winds that will eventually vanish through Wednesday morning.

At the same time, the low southwest will undergo a rapid strengthening– the wind field is set to become violent, potentially supporting the formation of a sting jet wind maximum with gusts of more than 161 km/h (100 mph).

The large low over the Gulf of Alaska will continue weakening into Wednesday night, but the new low will deepen and will be coming near Southeast Alaska. Winds will remain severe on Thursday, January 7, while the storm comes closer to the region.

The highest winds are expected to reach above 105 km/h (65 mph) along the coast while waves will reach 14 m (45 feet), also spreading to the region into Friday, January 8. 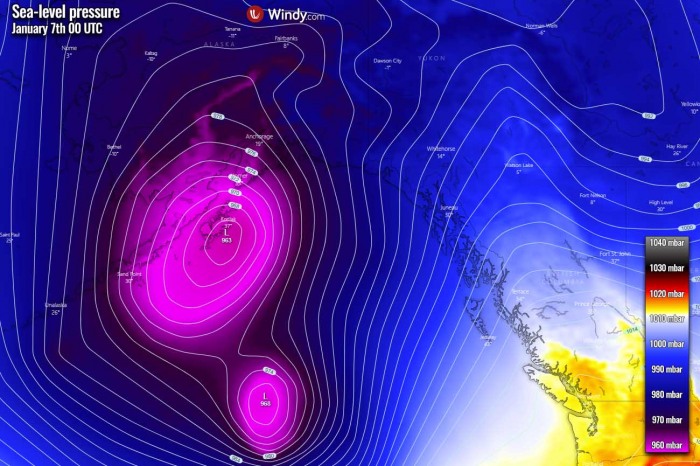 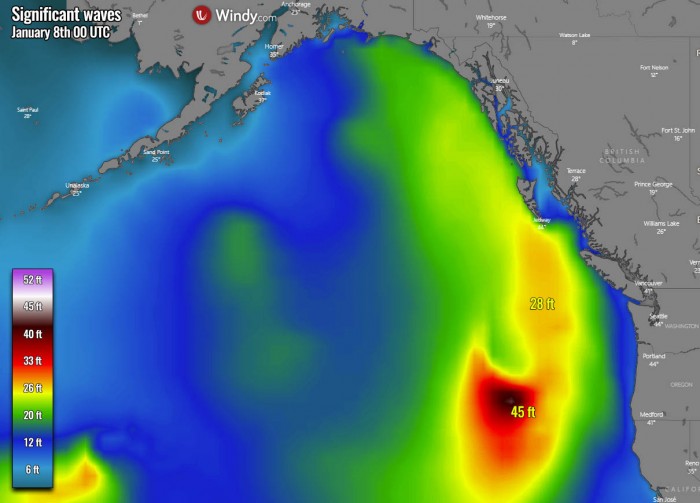 The ongoing extratropical storm with a winter storm over Southeast Alaska will bring an additional 130 to 250 mm (5 to 10 inches) of precipitation over the next five days.

The majority of this precipitation will be as snowfall as favorable temperature conditions spread across the Southeast Alaska region.

Around 1.2 to 1.8 m (4 to 6 feet) of snow is likely across the mountain range, with the highest amounts expected near the peak mountains in southern Alaska mainland and Southeast Alaska over the Rockies.

On Tuesday, January 5, parts of the northern, central and southern coastal areas of British Columbia, Canada have recorded winds in excess of 120 km/h (74 mph), The Weather Network reports.

The winds knocked out power to thousands, as many as 26 000 at one point Tuesday evening, January 5. The storm also brought down numerous trees as a result, The Weather Network reported.

Effects from the intense winter storm continued affecting B.C. into January 6, with powerful wind gusts of 100 km/h (62 mph) expected for some areas.

"The bulk of the latest round of heavy precipitation is moving into the Pacific Northwest," NWS forecaster Kong noted early January 6. "As the associated frontal system gradually weakens, the precipitation will gradually become less intense later today."

Much of the precipitation should fall as rain along the Coastal Ranges of Washington and Oregon into northern California while 150 – 300 mm (6 to 12 inches) of snow is forecast for the higher elevations of the Olympic and Cascade Ranges.

By Thursday, January 7, the snow will move eastward across the northern Rockies with mixed precipitation over the northern High Plains while a reprieve in the activities reaches the Pacific Northwest.

However, the next surge of moisture from another Pacific front is forecast to impact the same areas of the Pacific Northwest and northern California by Thursday night.