East Asian summer monsoon (EASM) is one of the most dominant climate systems in East Asia. The anomalous EASM can cause extremely high temperatures, floods or drought. And the El Niño-Southern Oscillation (ENSO), the dominating mode in the tropical Pacific, is the most important factor affecting EASM. Understanding the processes for interannual to interdecadal variability of EASM-ENSO relationship is crucial.

Owing to the limited period of observational data, the related studies of decadal or multidecadal variation of ENSO and EASM have their own drawbacks. Therefore, climate model becomes an important tool.

Using a coupled climate model with a 1000-year simulation, scientists from CAS Institute of Atmospheric Physics investigated the multidecadal variations of the EASM-ENSO interannual relationship. 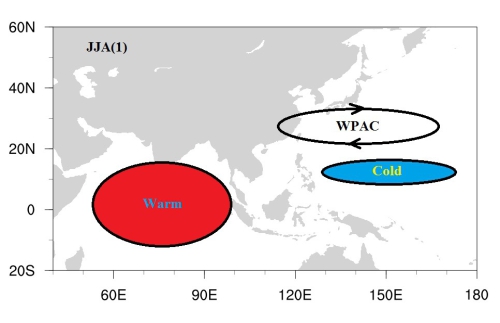 The EASM-ENSO interannual relationship is found to have experienced multidecadal variations. During periods with a significant ENSO-EASM relationship, the ENSO-related circulation anomalies show a Pacific-Japan (PJ)-like pattern with significant wave activity flux propagating from the tropics to the north in the lower troposphere, and from the mid-latitudes to the south in the upper troposphere.

"The main reason for the multidecadal variations of ENSO-EASM relationship is the amplitude discrepancy of SST anomalies over the Indo-western Pacific Ocean," says HUANG Gang, the corresponding author of the study. "And the discrepancy, in turn, leads to the intensity difference of the western North Pacific anomalous anticyclone and related climate anomalies over the East Asia-Western North Pacific."