A new study finds that the ionospheric anomaly over the Weddell Sea, near the tip of South America in the southeast Pacific Ocean, is likely influenced by proximity to auroral energy input, rather than by tilting magnetic fields. The anomaly was discovered in the 1950s by a team of scientists in Antarctica who sent high-frequency radio signals into the ionosphere and recorded the return signals.

The new study investigates and quantifies the causes of the Weddell Sea Anomaly (WSA), extending from approximately 30° to 120°W geographic longitude and 50° to 75°S geographic latitude at solar minimum between 2007 and 2010. 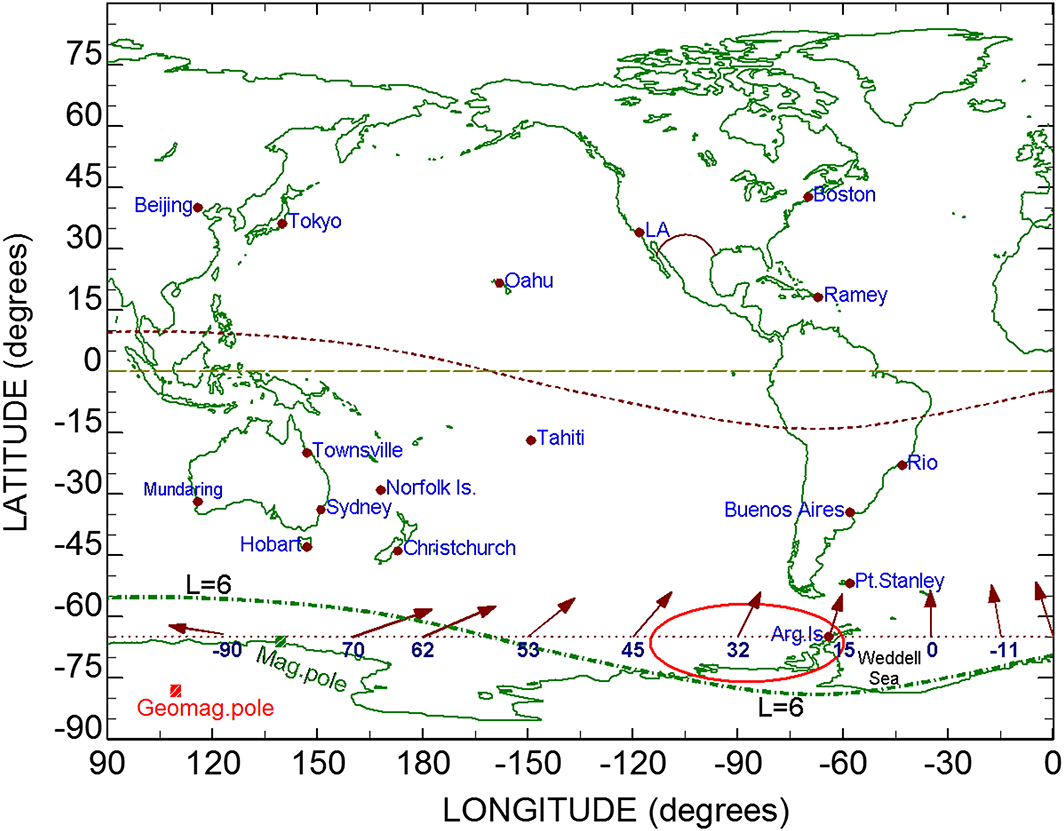 Map showing the magnetic declination at 65°S latitude. The ellipse shows the approximate location of the main Weddell Sea Anomaly region where the midnight NmF2 exceeds the midday NmF2 by a factor of 2. The arrows show the declination from geographic meridian pictorially. The numbers underneath the arrows give the magnitude of the declination. Dip angle and other magnetic parameters are displayed in Table 1. The geographic and geomagnetic equators are also shown. The dash-dotted line shows the approximate L = 6 (66°S magnetic latitude) contour. Also shown are the magnetic (65°S, 138°E) and geomagnetic (80°S, 108°E) poles. The magnetic pole is where the field lines are vertical, and the geomagnetic pole is the point where the axis of a centered dipole intersects the Earth's surface. Credit: P. G. Richards et al.

This region is unusual because the midnight peak electron density exceeds the midday peak electron density in summer. This study is far more quantitative than previous studies because, unlike other models, it assimilates selected data parameters to constrain a physical model in order to investigate other aspects of the data. It is shown that the commonly accepted explanation that the WSA is related to the magnetic field declination and inclination effects on the neutral wind does not explain the longitudinal variation of the electron density. 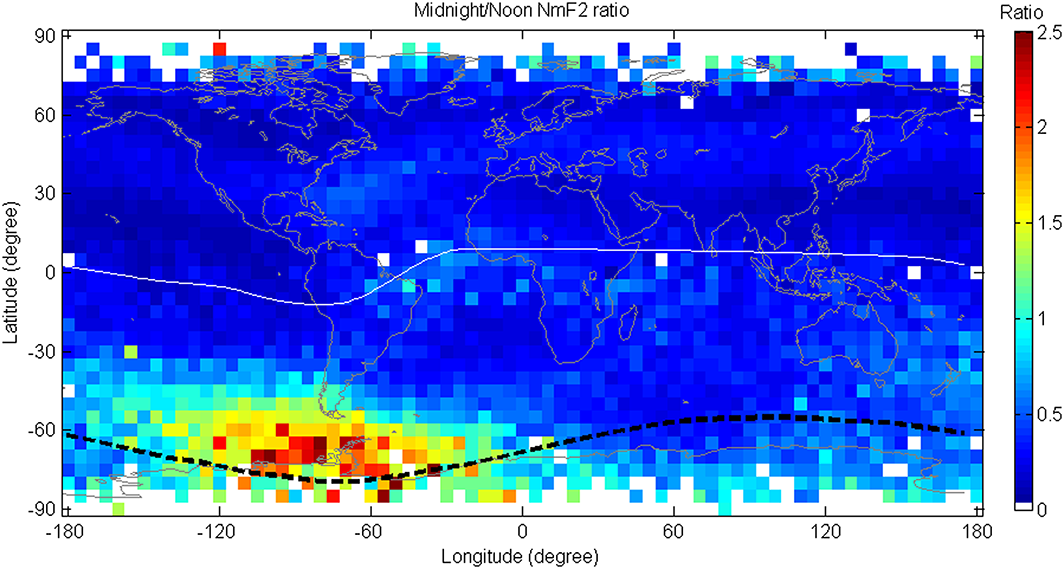 Map showing the midnight to midday NmF2 ratio of the combined January and December COSMIC NmF2 data from all the years 2007 to 2010. The black dashed line in the Southern Hemisphere is for −66° magnetic latitude (L = 6). Credit: P. G. Richards et al.

"The contention that the magnetic field configuration is primarily responsible for the WSA is incomplete rather than wrong. It ignores likely changes in neutral densities and winds. Indeed, it is possible that the WSA exists only because it is in a magnetic midlatitude region that has extended sunlight hours," study authors say.