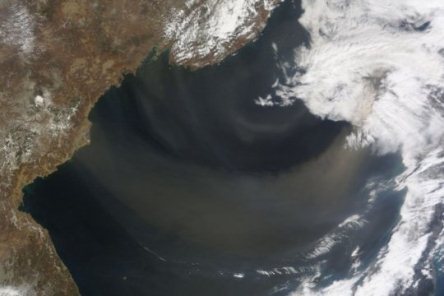 MIT study finds that the short residence of iron in surface waters makes phytoplankton very sensitive to any changes in the level of desert dust in the ocean.

Desert dust is one of the only sources of ocean iron. Each spring, dust storms in the deserts of Mongolia and northern China send large amount of dust into the atmosphere that is swept away by the eastward wind as far as the Pacific. As examined by scientists at MIT, Columbia University and Florida State University, iron stays only around six months in surface waters before sinking after being deposited in the ocean. As iron is an essential nutrient for hundreds of species of phytoplankton that make up the ocean's food base, this high turnover of iron implies that seasonal changes in desert dust may have dramatic effects on surface phytoplankton.

"If there are changes to the sizes of deserts in Asia, or changes in the way people are using land, there could be a larger source of dust to the ocean," says Chris Hayes, a postdoc in MIT's Department of Earth, Atmospheric, and Planetary Sciences (EAPS). "It's difficult to predict how the whole ecosystem will change, but because the residence time [of iron] is very short, year-to-year changes in dust will definitely have an impact on phytoplankton."

Hayes and his colleagues traveled to Hawaii to collect ocean samples at a station called ALOHA, the site of a long-term oceanography program conducted by the University of Hawaii. In September 2013, the team passed two weeks in the open ocean collecting ocean water samples at varying depths. They sent the samples back to MIT after acidifying them. At MIT, the samples were tested for iron, and also for thorium which, as Hayes reasoned, might be a reasonable proxy as the sinking rate of iron from ocean’s surface into deep waters was difficult.

Among the isotopes of thorium, Thorium-232 is typically found in dust, and thorium-230 is produced from the decay of uranium, which decays to thorium at the same rate throughout the ocean. By comparing the amount of thorium-230 detected in ocean samples to the amount produced by uranium decay, Hayes was able to calculate the time it takes for thorium to sink after settling on the ocean's surface. Hayes says that the removal rate of thorium is equivalent to the rate at which dust is supplied to an ocean region. Hayes then used the measurements to estimate how long iron stays in surface waters.

The team found that iron stays within 150 metes of the ocean’s surface, the layer in which phytoplankton stays. The short residence period of iron, which is around six months, allows phytoplankton less time to absorb the nutrient and therefore makes them more sensitive to any changes in incoming desert dust. Since phytoplankton absorb carbon dioxide, better estimates of iron’s residence rate in surface waters and input rate of desert dust in ocean may help scientists gauge the role of phytoplankton in combating the effects of climate change.

Featured image: A 2012 satellite image shows a dust storm blowing over the Sea of Japan out to the North Pacific. (Courtesy: NASA)