Scientists have uncovered the ocean conditions that support a massive summertime bloom of algae that spans 16 % of the global ocean. Known as the Great Calcite Belt, this dense group of a microscopic phytoplankton, coccolithophores, can be seen in satellite images as turquoise swirls in the dark blue water of the Southern Ocean.

"Satellites see the light reflected by the coccolithophores," said Barney Balch, a senior research scientist at Bigelow Laboratory for Ocean Sciences. "Under a high-powered microscope, you can see this is because they surround themselves with intricate, white plates made of calcium carbonate. These chalk plates act like millions of tiny suspended mirrors, reflecting sunlight back out of the ocean toward NASA's Earth-observing satellites." 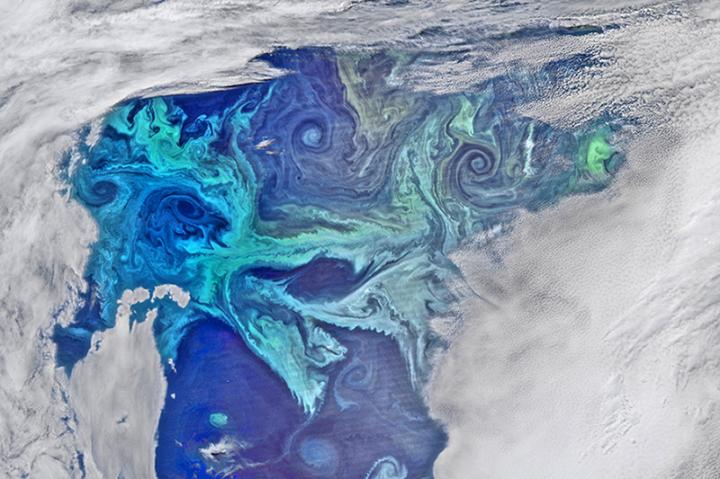 A phytoplankton bloom in the Southern Ocean reflects light back toward a NASA satellite. An international team of scientists recently determined the ocean conditions that support the massive summertime bloom, which spans 16 percent of the global ocean. Credit: NASA

Balch was part of an international team of researchers from Bigelow Laboratory, University of Southampton (UK), the National Oceanography Centre in Southampton, and the Bermuda Institute of Ocean Science that studied the conditions that make the bloom possible and the ecology of the phytoplankton species that compose it. They recently published their results in the journal Biogeosciences.

"The links between ocean chemistry and populations of coccolithophores and diatoms are not straightforward," said lead author Helen Smith, a researcher from the University of Southampton. "To fully understand the interplay between these two important phytoplankton groups and the ocean environment, we had to maintain a holistic approach to data collection and analysis."

The team found that sea surface temperature, nutrient levels, and carbon dioxide concentration were the most important factors in determining where species of coccolithophores and diatoms, another type of microscopic phytoplankton, grow. As expected, dissolved iron was a key factor in the development of the plankton populations.

"All phytoplankton need iron to grow, and it is generally in short supply in the Southern Ocean," said Ben Twining, a senior research scientist and interim president at Bigelow Laboratory. "Coccolithophores – but not necessarily diatoms – were more abundant at locations with elevated iron."

Indeed, diatoms also need silica to build their glass exoskeletons. Great Calcite Belt water doesn't have enough silicic acid to support large diatoms, which are typically found in the most productive parts of the world's oceans. This creates an opportunity for species of tiny phytoplankton to thrive, including coccolithophores and extremely small diatom species. As a result, small phytoplankton dominate the region.

"No single environmental factor was responsible for the variability in phytoplankton in our study, which highlights the complexity of coccolithophore and diatom success within the summertime Great Calcite Belt," Smith said.

Furthermore, the researchers found cause to question the role in carbon removal that the Southern Ocean is thought to play in the global carbon cycle, at least in the Great Calcite Belt. When coccolithophores build their chalk plates, they remove carbon from the water, but that process also releases carbon dioxide back into the surface ocean and atmosphere.

Throughout the Southern Ocean, the dense mineral shells of coccolithophores and diatoms ballast sinking particles of organic debris. This process of pulling carbon into the ocean's depths and away from the atmosphere is called the biological carbon pump. The coccolithophore feature that forms the Great Calcite Belt is so big, however, that it can alter the summertime water chemistry.

"When we steam through the Great Calcite Belt, we see that there are hot-spots of elevated carbon dioxide, in a place that remains generally a major carbon sink," said Professor Nicholas Bates, a co-author from Bermuda Institute of Ocean Science.

This finding improves the integrity of global carbon cycle models, which can help scientists around the world predict the fate of carbon dioxide in the atmosphere.

Balch and his team will continue to study the impacts of coccolithophores on the global ocean, undertaking cruises supported by the National Science Foundation in 2019 and 2020 to the Indian Ocean. Cold surface water in the Great Calcite Belt region sinks deep below the warmer, less dense water to the north. Forty years later, that water surfaces again near the equator, bearing nutrients that fuel an estimated 75 % of microscopic plant growth in the tropics and subtropics.

"We think that the phytoplankton of the Great Calcite Belt fundamentally condition this water before it sinks, shaping what will grow near the equator when the water surfaces decades later," Balch said.

Featured image: A phytoplankton bloom in the Southern Ocean reflects light back toward a NASA satellite. An international team of scientists recently determined the ocean conditions that support the massive summertime bloom, which spans 16 percent of the global ocean. Credit: NASA