A team of scientists from the Woods Hole Oceanographic Institution (WHOI) have identified the massive, previously unknown source of methanol in the ocean. According to the study, the phytoplankton, microscopic plant-like organisms, possess a surprising and unique ability to biologically produced methanol in abundant quantities, which could compare or even exceed the methanol amounts produced on the land.

Research results will help to answer important questions about ocean microbiology and the amount of methanol generated on our planet. It could also spur further research of biofuel applications.

"Methanol can be considered a ‘baby sugar’ molecule and is rapidly consumed in the ocean by abundant bacteria – called methylotrophs – which specialize in this type of food. However, up until now, the thought was that methanol in the ocean came from an overflow of terrestrial methanol in the atmosphere. So, this discovery reveals a huge source of methanol that has gone completely unaccounted for in global methanol estimates," said Dr. Tracy Mincer, WHOI associate scientist and lead author of the paper. 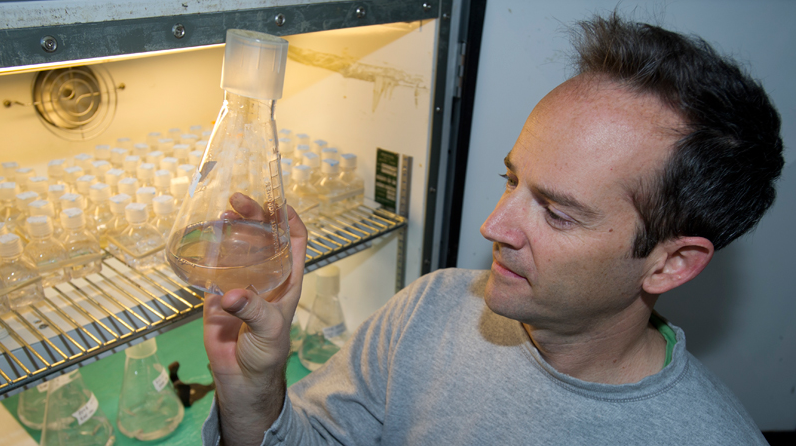 Microbiologist Tracy Mincer with one of the hundreds of cultures of marine microbes that is maintained at WHOI. Image credit: Tom Kleindinst, Woods Hole Oceanographic Institution

The idea of biologically produced methanol in the ocean has come from Mincer's previous work where he found methanol-nibbling bacteria in a phytoplankton culture he was growing. He extracted the microbe's DNA and discovered it matches with a well-known methylotroph in the ocean.

"Once we were able to characterize this bacteria, I wanted to explore the idea of plankton-produced methanol. I began reviewing literature and found a paper where a student, as part of his dissertation, had reported some measurements of methanol from phytoplankton. At that point, I knew something was really going on there. It was like a fist coming right out of the computer screen and punching me in the face," Mincer explained.

"I asked a number of colleagues how to measure methanol in seawater and no one had done it before. There didn’t appear to be any methods to directly measure it, so we had to develop our own." 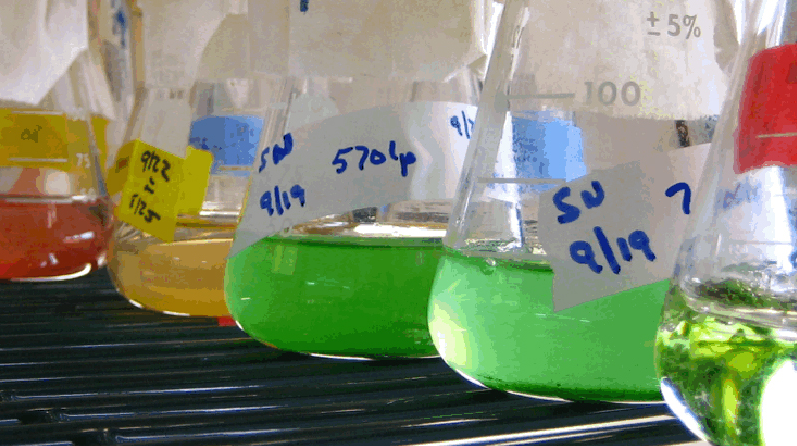 Finding the right laboratory conditions to culture phytoplankton can be challenging. Phytoplankton are mostly microscopic, single-celled photosynthetic organisms that live suspended in water. Like land plants, they take up carbon dioxide, make carbohydrates using light energy, and release oxygen. They are what is known as primary producers of the ocean—the organisms that form the base of the food chain. Image credit: Tracy Mincer, Woods Hole Oceanographic Institution

Extracting samples of methanol wasn't easy, and the scientists had to separate it from the salts in seawater by bubbling helium through it to push the volatile organic compounds out.

Through the extraction process, the scientists learned the phytoplankton release the methane in quick episodic pulses, and only during certain stages of growth.

"As we were growing the phytoplankton cultures, we measured like crazy during the first week and didn’t detect anything. But after about ten days, they started to run out of nutrients and hit a plateau, which is when we saw that initial pulse of methanol."

One of the most surprising results of the study was the amount of methanol the phytoplankton was capable of producing. According to the measurements, at least, a million tons of the compound is being produced in the oceans every year, an amount which exceeds those found in the atmosphere.

"In our cultures, we were surprised to see so much methanol being produced. The fact that the quantities in the ocean could rival or exceed levels on land indicates that the abundance of methylotrophic microbes – and the overall metabolic demand for methanol – is higher than previously thought."

"Up until now, in situ oceanic methanol sources have been speculative. This study is significant because it shows there is a system that can make and consume methanol biologically in the ocean in large quantities. That wasn’t fully appreciated before," said Dr. Brian Heikes, a professor and atmospheric chemist at the University of Rhode Island's Graduate School of Oceanography. 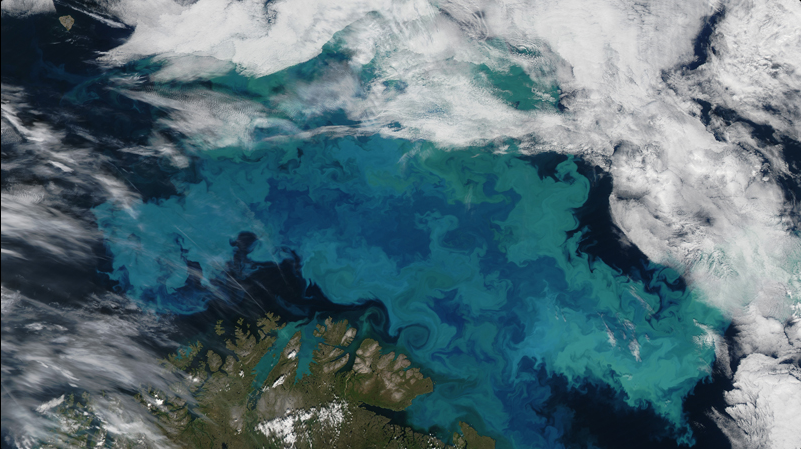 Satellite imagery captures a massive bloom of microscopic phytoplankton exploding across the Barents Sea. Among the most abundant organisms in the sea, phytoplankton, scientists find, are able to biologically produce methanol – and in quantities that could rival or exceed that which is produced on land. Image credit: NASA MODIS

The high methane production in the world's oceans is quickly offset by a fast consumption, and most of the produced methane gets consumed within a few days. In combination with methane's high solubility, the chances of it escaping into our planet's atmosphere in significant amounts are quite small. It can, however, sink toward the seafloor.

"We believe that when phytoplankton die and sink, they emit methanol. This can fuel deeper populations of bacteria in the ocean, and helps answer the question of where methylotrophs in the deep ocean are getting the methanol from," Mincer said.

The methane resources could potentially be turned into biofuel, according to experts.

"Like terrestrial plants, we believe phytoplankton produce methanol enzymatically, so if we can obtain the enzymes involved and use them to digest their biomass, we may be able to extract useful methanol from them. Methanol is a waste product of these organisms, and they can produce a good amount of it. So when those pulses come out, they could be taken advantage of and harvested from cultures."

In the future research, the scientists hope to answer a set of newly opened questions, such as: can methanol tell us anything about phytoplankton growth patterns, what the “chemical currency” is, regarding what the microbes give back to the phytoplankton community, and what the velocity of the methanol consumption loop is in the ocean.

"Sometimes in research you have a finding that’s bigger than you or your lab can tackle. If we can answer these questions, we will understand the whole relationship of microbiology in the oceans better and be able to treat this layer of life in the upper ocean like a layer of skin. We’ll know when it’s healthy, when it’s not, and how it functions. Understanding how our planet works at those fundamental levels is critically important," Mincer concluded.

Featured image: Satellite imagery captures a massive bloom of microscopic phytoplankton exploding across the Barents Sea. Among the most abundant organisms in the sea, phytoplankton, scientists find, are able to biologically produce methanol – and in quantities that could rival or exceed that which is produced on land. Image credit: NASA MODIS