NASA's scientists have conducted a first study to observe the global, long-term phytoplankton community trend based on a model driven by the satellite data. A significant decline in certain types of phytoplankton has been discovered and the results of this 15 year long research were published in Global Biogeochemical Cycles, on September 23, 2015.

A new study showed the largest known type of phytoplankton algae, diatoms, have globally declined more than 1% between 1998 and 2012. Significant losses in the population have occurred across the North Pacific, North Indian and Equatorial Indian oceans.

Carbon dioxide from the atmosphere dissolves in cold ocean water. When the phytoplankton bloom, the tiny organisms take up the disolved carbon dioxide and convert it to organic carbon. The organic carbon is an essential base of the marine food web, as animals use it to grow. When the phytoplankton die, the cells sink to the bottom of the ocean along with the carbon absorbed by its body.

Because of its size, diatoms sink faster than the rest of the phytoplankton. The ocean currents will circulate part of it back to the surface where it will fuel another phytoplankton bloom, just like a fertilizer. The rest of the diatoms will settle on the bottom of the ocean and accumulate in sediment where it will be stored for thousands or millions of years. In this process the carbon removed from the atmosphere is stored in the ocean over a long-term period of time. 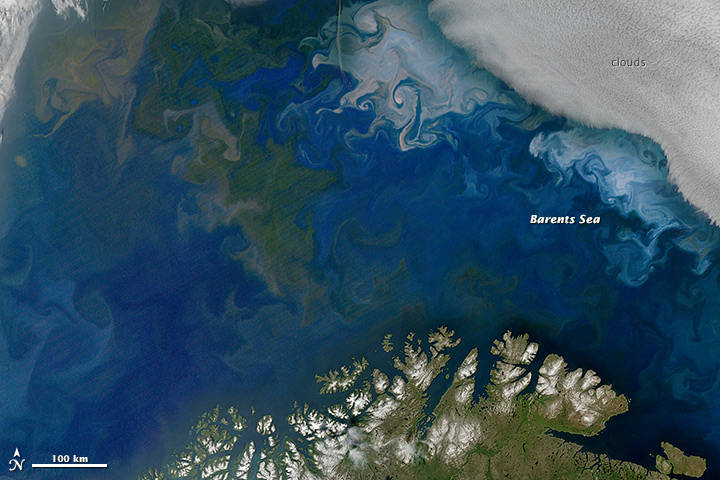 Phytoplankton blooms in the Barents Sea off the coast of Norway and Russia, shown in natural color from NASA's Aqua satellite on July 10, 2014. The past analysis suggests the green bloom is diatoms and the white bloom is coccolithophores. Image credit: NASA's Earth Observatory.

The study has lasted for 15 years, and the decline in diatoms algae population is one of several regional shifts observed in four types of phytoplankton.

For the purpose of the study, the research team has taken ocean color measurements of chlorophyll from NASA's Sea-viewing Wide Field of View Sensor (SeaWiFS) that flew aboard the Geo Eye OrbView-2 satellite from 1997 to 2010, and the Moderate Resolution Imaging Spectroradiometer (MODIS) aboard NASA's Aqua satellite from 2002 to the present. The data show the total chlorophyll in the ocean of all the phytoplankton types combined together.

By using the satellite data and field observations, NASA's Ocean Biogeochemical Model recreates the conditions in the ocean, such as its currents, the amount of sunlights and nutrients in different ocean basins. Different phytoplantkons feed at a different rate and use different amounts of nutrients. By combining the data, the model is able to distinguish between the phytoplankton types such as diatoms, coccolithophores, chlorophytes and cyanobacteria.

"Inclusion of satellite data into this kind of biogeochemical modeling is really exciting. This kind of tool allows you to start exploring that problem in a way we're not able to do by using just a satellite alone, or just a model alone. By combining satellite data, models, and additional environmental information, you can start telling a more holistic story," explained Jeremy Werdell, an oceanographer at NASA Goddard who was not involved in this study.

Modeling results show the diatoms declines because the uppermost layer of ocean water, the so-called mixed layer is becoming shallower. Over the course of the 15 year study, the mixed layer has become shallower by 1.8 meters (5.9 feet).

The growth of phytoplankton is well conditioned in this particular ocean layer, as its a place where waves and currents continually mix, and draw nutrients from deeper layers of the water. A shallower mixed layer has the capacity of holding less nutrients.

The phytoplanktons have most likely run out off nutrients, although it still remains uncertain why the mixed layer became shallower

Although the observed decline of diatom is statistically significant, it is not severe. However, it needs to be monitored in the future as the conditions is the ocean are expected to change, whether by natural variation or due to climate change.

Source: NASA, The Abstract of the paper – Global Biogeochemical Cycles

Featured image: Phytoplankton blooms in the Barents Sea off the coast of Norway and Russia, shown in natural color from NASA's Aqua satellite on July 10, 2014. The green bloom is most likely diatoms and the white bloom coccolithophores. Image credit: NASA's Earth Observatory.