Another named tropical storm has sailed the waters of central Pacific in 2015 hurricane season. Tropical Storm "Niala" formed on September 25, 2015 southeast of Hilo, Hawai'i and is now on the course toward the Big Island. Although the system is expected to turn westward on September 26, a Tropical Storm Watch was issued for the area, warning about possible strong flash floods and landslides within the watch area. 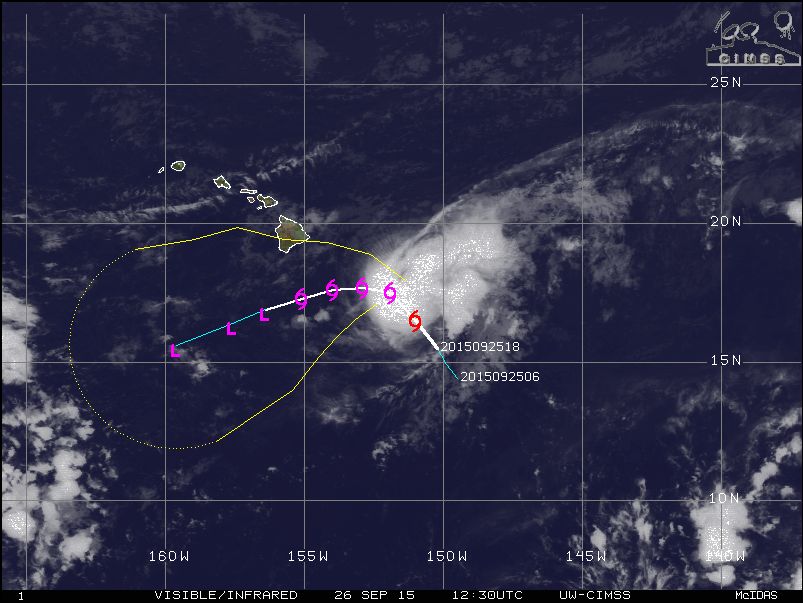 On September 26, at 12:00 UTC, the system was located about 480 km (300 miles) southeast of Hilo, Hawai'i and was moving northwest at 13 km/h (8 mph). At this point Niala was packing maximum sustained winds of 90 km/h (55 mph), according to Central Pacific Hurricane Center (CPHC). Minimum central pressure of the tropical storm was estimated at 999 hPa.

Winds of tropical force extend up to 130 km (80 miles) out of the storm's center. Niala will hold on to its intensity over the next 24 hours, then start to gradually weaken by the end of Sunday.

A Tropical Storm Watch is in effect for the island of Hawaii, as of September 26, CPHC reports. About 152 to 302 mm (6 to 12 inches) of rainfall is expected within the watch area. This amount of precipitation could cause potentially dangerous flash floods and landslides across the affected areas.

Large swells are also forecasted along the southeast shores of the Big Island during September 26 and 27, with potential to extend into the next week. Tropical storm winds are expected across the Big Island on September 27.

Local residents are warned to be alert, prepare to cover all windows and door openings, secure the furniture and all the loose, lightweight objects such as garbage cans or garden tools capable of inflicting damage, and keep an extra cash supply at hand in case of emergency situations.