"Accumulated Cyclone Energy "ACE values show the activity and destructive potential of individual tropical cyclones and entire tropical cyclone seasons. They are calculated every 6 hours, by scaling the squared wind speed values. ACE seasonal values are calculated by summing the individual values of each storm, taking into the account the number, strength and duration of all the tropical storms in the season. 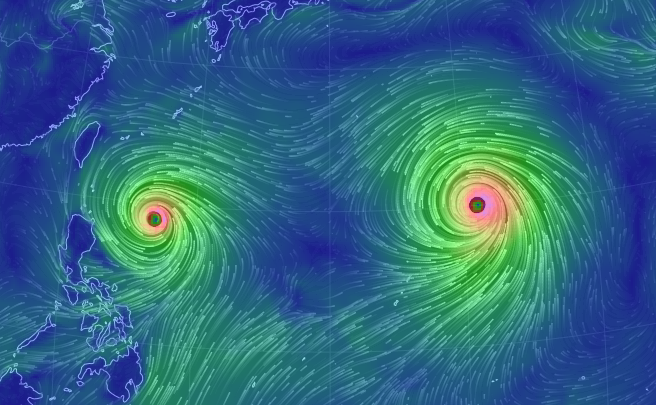 Twin typhoons Goni and Atsani, as of August 19, 15:00 UTC, as forecast by the GFS model. See animation at earth.nullschool.net.

Intense hurricanes with long life spans, have a high ACE index while weak tropical storms of a short life span have low values of ACE.

Dr. Phil Klotzbach reported the ACE index of 257 units up until August 17 which is about 30 units above the previous record activity of 227 units, measured during 2002. The index values are expected to additionally increase with Typhoons "Goni" and "Atsani". The tropical storm records date back to 1971.

"The NW Pacific has generated more ACE in the past 12 hrs (Goni and Atsani) than the Atlantic has all season," the scientist reported on August 18.

The ACE index value, up to August 20 measures 289.44 in the NW Pacific Ocean, and its values are 268% of the normal year-to-date average values, Dr. Ryan Maue reported.

Up until now, during the 2015 season, 17 storms have formed across the waters of NW Pacific, 12 of which reached typhoon (hurricane) status. The storms "Maysak", "Noul", "Dolphin", "Nangka", "Soudelor and "Atsani" have reached all the way to a super typhoon status, as their maximum sustained wind speeds measured 241 km/h (150 mph).

Between August 1 and August 18, 12 cyclones of Category 4 or 5 have formed in the eastern North Pacific, which beats a previous record of 7 tropical cyclones of the comparable intensity reported in 2014, according to Klotzbach. 75% of all hurricanes formed in the Northern Hemisphere during the 2015 season have reached Category 4 or 5, which is well above the 2007 record, when 64% of the hurricanes reached the same intensity. 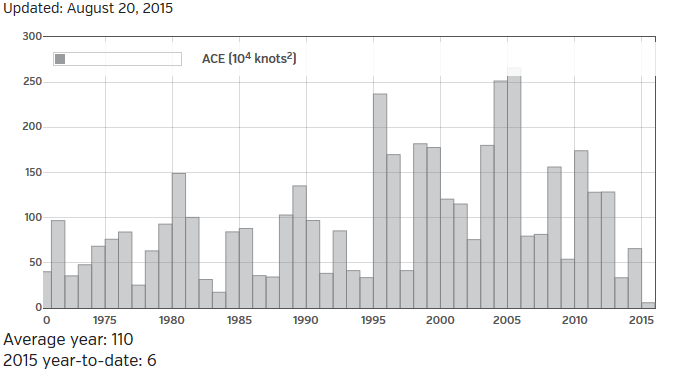 In comparison to the intense tropical activity in the Pacific, not even a single hurricane has been produced in the Atlantic so far. (Update: Hurricane "Danny" formed in the Atlantic Ocean on August 20, 2015.)

Scientists think this weak Atlantic hurricane season is due to the strong El Nino activity during the 2015: "The high ACE values we've seen in the northeast and northwest Pacific basins are consistent with El Nino," Klotzbach said.

During a moderate to strong El Nino, the tropical activity across the eastern Pacific increases, while the opposite happens in the Atlantic. According to the reported data, this seems to be the case this year, as well.