The risk of a major eruption at Sakurajima volcano remains high and the Japan Meteorological Agency (JMA) maintains alert level 4 (second highest). Alert level of 4 warns residents nearby to prepare to evacuate, as a major eruption could be imminent.

The summit of the volcano has inflated by the enormous amount of approximately 16 cm (6.30 inches) from January 4 to August 17, 2015, according to radar measurements done by JAXA's ALOS-2 satellite.

This suggests that a significant batch of new magma is currently stored in the volcano's upper plumbing system and the question remains when and how it might erupt, Volcano Discovery explains. 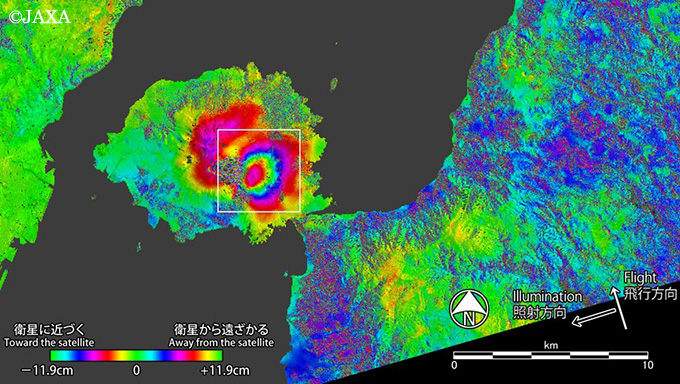 The agency added it observed a phenomenon called volcanic glow, in which air above the crater looks red because of the reflection of magma and red-hot volcanic rocks, early in the day along with the latest eruption at the Showa crater.

Additionally, volcanic gas releases have been detected at the sea floor of the Futatsumata Port on the northern shore of Sakurajima peninsula. The port is located approximately 5 km (3.1 miles) from the summit.

The Aira caldera in the northern half of Kagoshima Bay contains the post-caldera Sakurajima volcano, one of Japan's most active. Eruption of the voluminous Ito pyroclastic flow accompanied formation of the 17 x 23 km caldera about 22,000 years ago. The smaller Wakamiko caldera was formed during the early Holocene in the NE corner of the Aira caldera, along with several post-caldera cones. The construction of Sakurajima began about 13,000 years ago on the southern rim of Aira caldera and built an island that was finally joined to the Osumi Peninsula during the major explosive and effusive eruption of 1914.

Activity at the Kitadake summit cone ended about 4850 years ago, after which eruptions took place at Minamidake. Frequent historical eruptions, recorded since the 8th century, have deposited ash on Kagoshima, one of Kyushu's largest cities, located across Kagoshima Bay only 8 km from the summit. The largest historical eruption took place during 1471-76. (GVP)