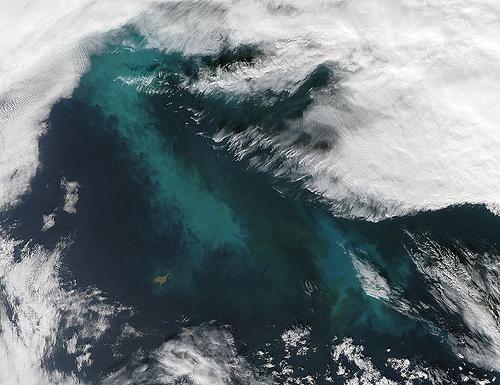 When summer comes to the Arctic, the tiny plants that feed the ocean's food chain form green blooms in the water. In some Arctic waters, the peak of this bloom has been arriving earlier every year since 1997, a study has found.

These areas, where peak bloom time is creeping up, are roughly the same as those with decreasing sea ice in June, according to the researchers. The researchers looked at satellite data from 1997 to 2009 showing the Arctic Ocean's concentration of chlorophyll – the green pigment responsible for plants' ability to turn carbon dioxide into sugars for growth. Ice and clouds can interfere with observations of the ocean's color, acknowledge the researchers in an article in the March 9 issue of the journal Global Change Biology. Of the areas with valid data, 11 percent show a trend toward earlier blooms, while only 1 percent showed later blooms. These locations have a "striking similarity" to the patterns of decrease in early summer sea ice, they write.

In some areas, the change was quite dramatic. For example, in the Baffin Sea, southwest of Greenland, the peak bloom moved from September to early July. Phytoplankton is crucial to the marine ecosystem, because it forms the base of the food chain. The creatures that eat the tiny plants, including fish and tiny animals called zooplankton, have adapted to make the most of these blooms.

It's not clear if they are able to sync up with the earlier blooms and avoid disruptions to critical life stages, such as egg hatching and larvae development, according to lead study author Mati Kahru, a research oceanographer in the Integrative Oceanography Division at the Scripps Institution of Oceanography in California.

"The spring bloom provides a major source of food for zooplankton, fish and bottom-dwelling animals," Kahru said. "The advancement of the bloom time may have consequences for the Arctic ecosystem." (OurAmazingPlanet)