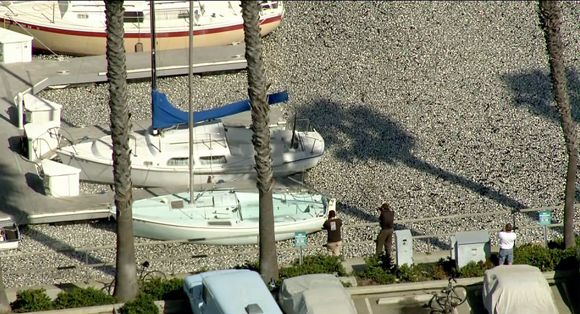 Millions of dead fish have washed up in King Harbor near Redondo Beach, and officials are now trying to figure out why. The dead fish, mostly sardines along with anchovies and mackerel, are apparently floating up to the surface from the ocean floor. KTLA’s Sky5 captured images of the fish completely coating the water’s surface in Basins 1 and 2 of the north side of King Harbor. Fish and game officials have not released a statement about what might have killed the fish. Officials were at the harbor investigating. There are reports that a red tide may have driven large numbers of the fish into the harbor, where they were killed by a lack of oxygen. (KTLA)

The exact cause of the mass deaths is unknown, but low oxygen levels in the water and high winds that rocked the L.A. region on Monday night may have been a contributing factors. Redondo Beach city workers and state fish and game officials are figuring out how to clean the mess before the stench of the dead fish grows worse.

Staci Gabrielli, marine coordinator for King Harbor Marina, told the Associated Press that the “fish apparently swam into the harbor to escape a red tide, a naturally occurring event that can poison fish or starve them of oxygen….high winds apparently kept the fish from leaving the harbor and they all crushed up against the harbor wall, where they used up the oxygen and suffocated.” (NeonTommy) 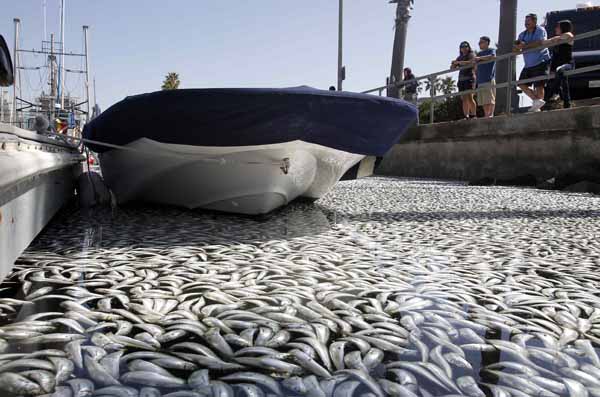 A southern California fish kill that authorities identified as more than a million sardines is not the result of any environmental foul play but rather is the product of natural forces. Floating fish were so pervasive in King Harbor Marina in Redondo Beach, California, that some moored boats seemed surrounded not by water but by the lifeless aquatic animals a foot deep. 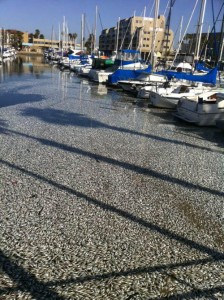 “All evidence points to oxygen deprivation as cause of death,” California Department of Fish and Game spokesman Andrew Hughan told CNN. “There is no oil sheen, nor is there a chemical sheen,” Hughan said.

Redondo Beach Police Sgt. Phil Keenan said authorities are confident of test results showing that oxygen deprivation caused the massive fish kill because the other part of the sardine school is alive and well in the mouth of the harbor. Keenan said the floating fish are a foot deep, and clean-up boats will spend the next few days removing the silvery animals by net.

“Part of the sardine school is out in the channel of the harbor and they’re doing fine,” Keenan told CNN. “For some reason, this large school of sardines got chased into the harbor – and they died off.”

Authorities said that the sardines likely sought calm waters inside the 1,400-vessel marina Monday evening when winds were gusting up to 45 mph and the waters were rough.The harbor’s algae may have contributed to the lack of oxygen, and then when the fish started dying, the resulting bacteria also consumed oxygen. 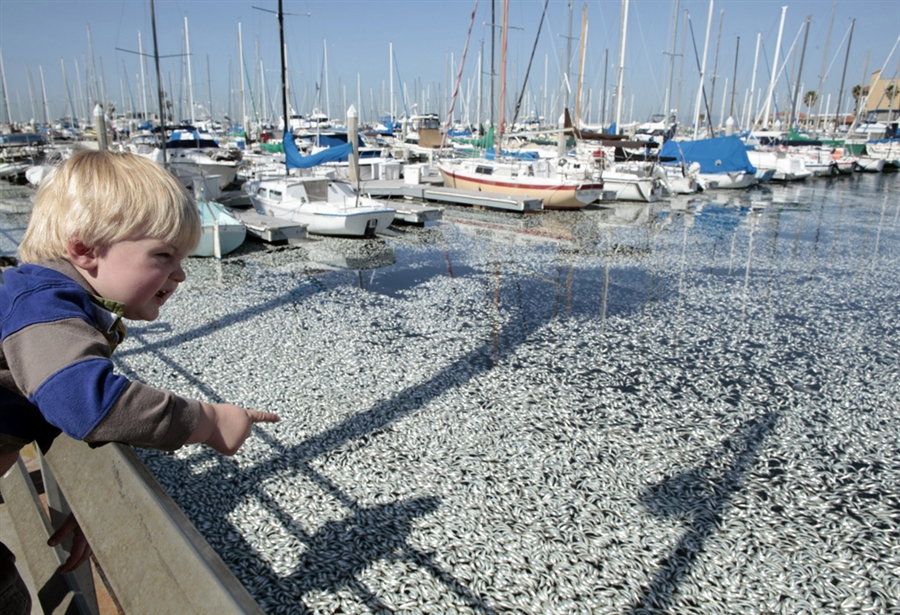 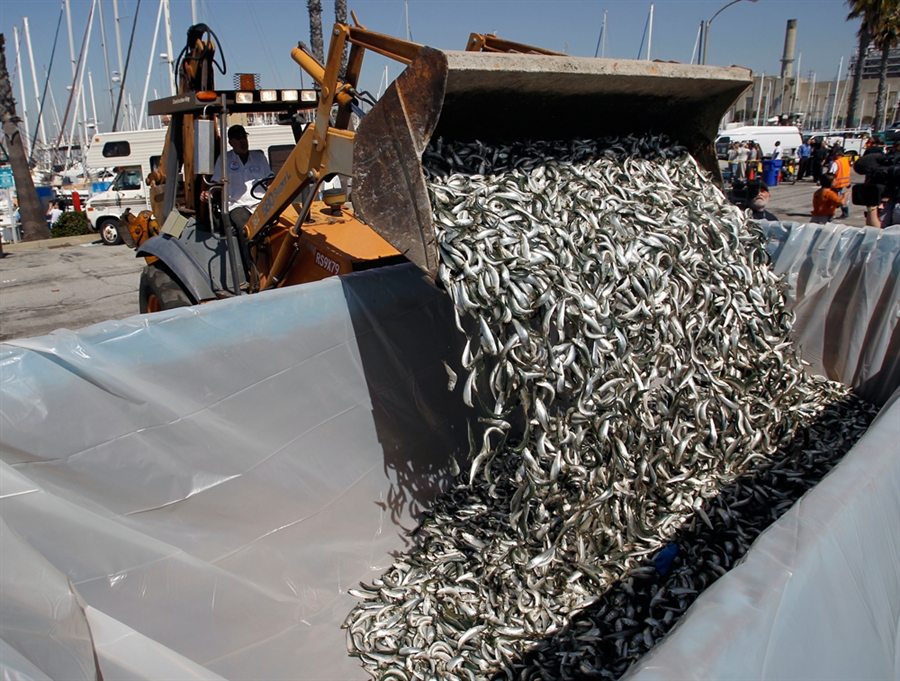 Necropsy, including a chemical analysis, will be performed on some of the dead fish. In what officials described as $100,000 clean-up effort, crews had been moving the dead fish into the open ocean to let them decompose naturally, but they decided on a more efficient method of removing the fish from the marina and having them sent to be recycled for fertilizer.(CNN) 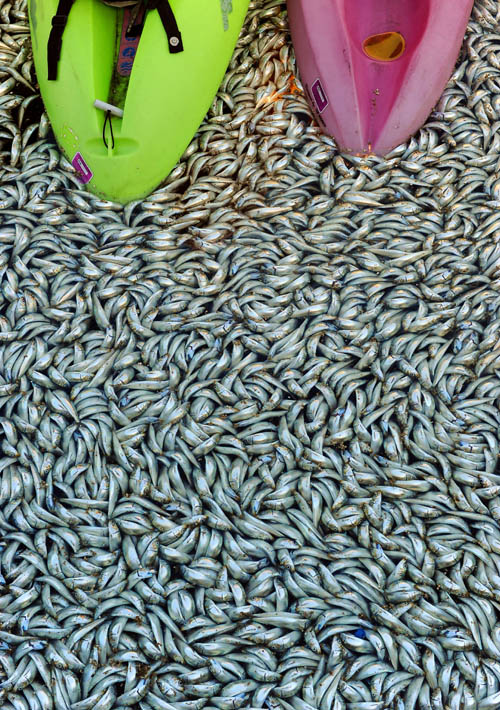 Redondo Beach officials said initial assessments suggest oxygen depletion in the King Harbor basins caused the massive fish die-off. City Manager Bill Workman said city officials with the help of marine experts would help determine if there was any environmental issue involved. Tests are now being performed on the water as officials begin removing the dead fish, which city officials estimated to be in the millions. 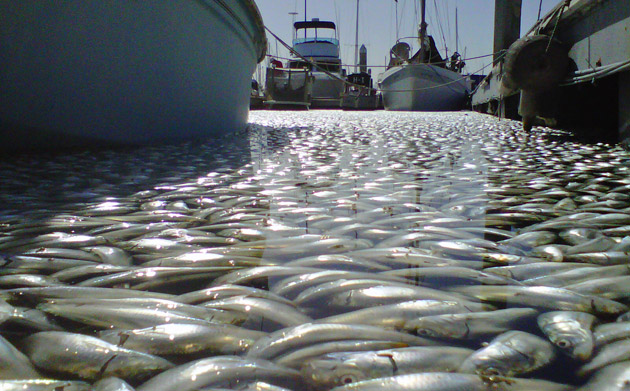 Workman noted that the harbor had been teeming in recent weeks with bait fish that even after their deaths “had no signs of degradation.” (L.A.Now) 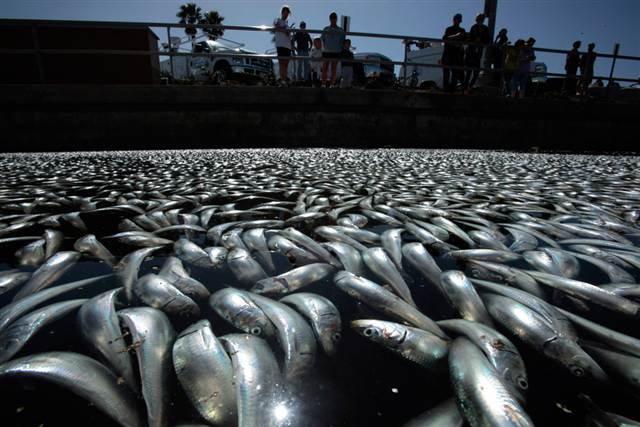 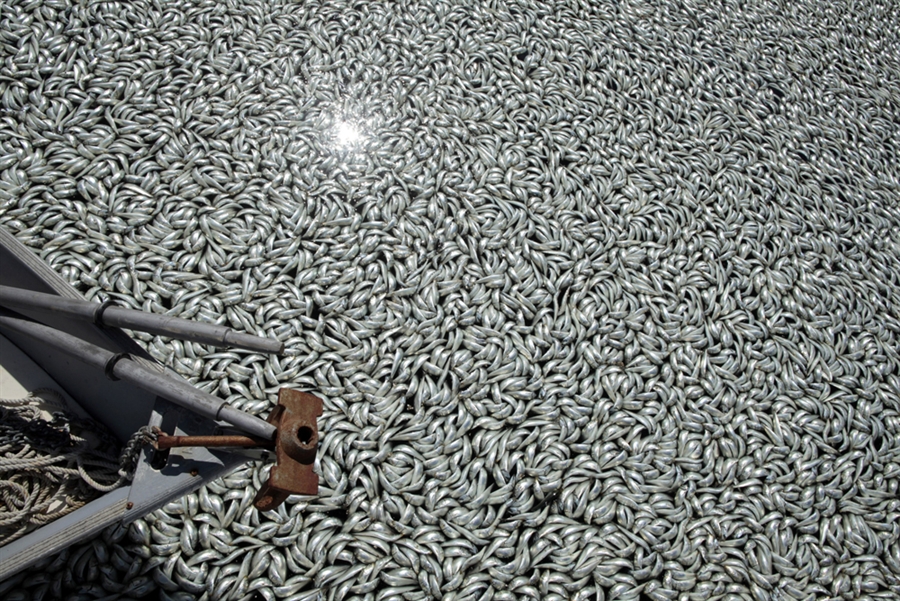 OCEAN OXYGEN DEAD ZONES
A new global study of Earth’s oceans shows a rapid rise in the number of “dead zones” – areas of seafloor with too little oxygen to sustain most marine life. The oxygen-starved waters have proliferated since the 1960s and now rank as one of the world’s most pressing environmental problems. 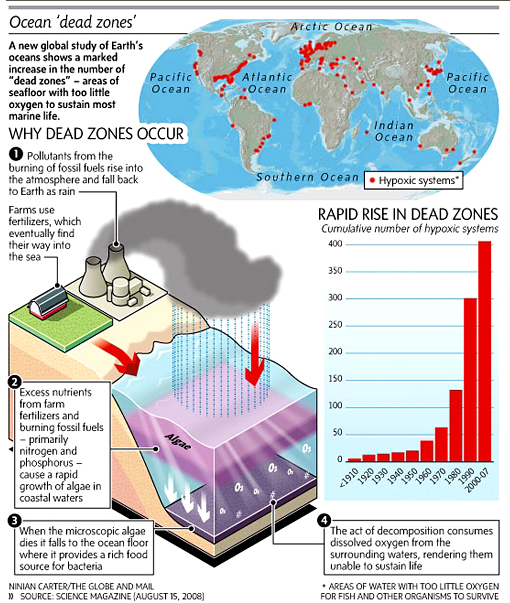 Clocking in at over 8000 square miles (21,000 km2) this year, probably the largest dead zone today stems from the Mississippi River delta in the Gulf of Mexico. This is a site at the confluence of significant farming in the midwest and significant fishing (and shrimping) in the Gulf area. The dead zone spans east to west along the Louisiana and Texas coasts.

Dead zones have been tracked sine the 1970s, but have increasingly expanded their locations, their reach, and are lingering after summer. The root of the problem is the spread of nitrogen caused by runoff of fertilizers, sewage outflows, and nitrogen deposits from burning fossil fuels. 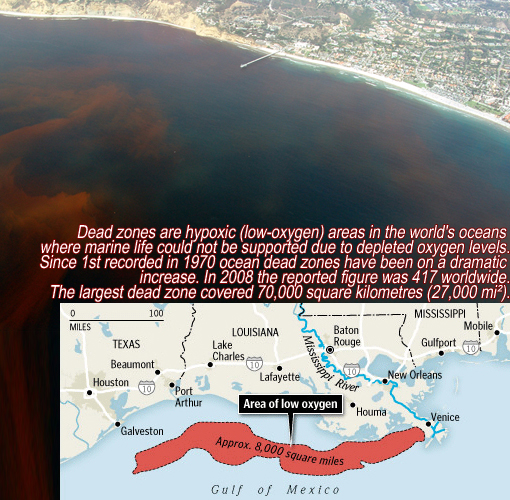 Dead zones are hypoxic (low-oxygen) areas in the world’s oceans, the observed incidences of which have been increasing since oceanographers began noting them in the 1970s. These occur near inhabited coastlines, where aquatic life is most concentrated. (The vast middle portions of the oceans which naturally have little life are not considered “dead zones”.) The term can also be applied to the identical phenomenon in large lakes.

In March 2004, when the recently-established UN Environment Programme published its first Global Environment Outlook Year Book (GEO Year Book 2003) it reported 146 dead zones in the world’s oceans where marine life could not be supported due to depleted oxygen levels. Some of these were as small as a square kilometre (0.4 mi²), but the largest dead zone covered 70,000 square kilometres (27,000 mi²). A 2008 study counted 405 dead zones worldwide. 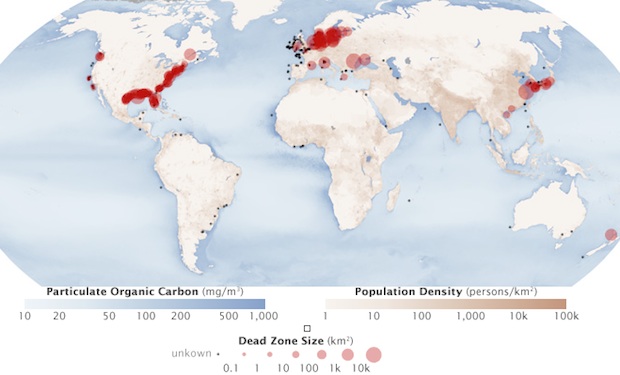 Oceanic Dead Zones Continue to Spread. Fertilizer runoff and fossil-fuel use lead to massive areas in the ocean with scant or no oxygen, killing large swaths of sea life and causing hundreds of millions of dollars in damage. According to a new study in Science, the rest of the world fares no better—there are now 405 identified dead zones worldwide, up from 49 in the 1960s—and the world’s largest dead zone remains the Baltic Sea, whose bottom waters now lack oxygen year-round.

This is no small economic matter. A single low-oxygen event (known scientifically as hypoxia) off the coasts of New York State and New Jersey in 1976 covering a mere 385 square miles (1,000 square kilometers) of seabed ended up costing commercial and recreational fisheries in the region more than $500 million. As it stands, roughly 83,000 tons (75,000 metric tons) of fish and other ocean life are lost to the Chesapeake Bay dead zone each year—enough to feed half the commercial crab catch for a year. (WorldCulturePictorial)