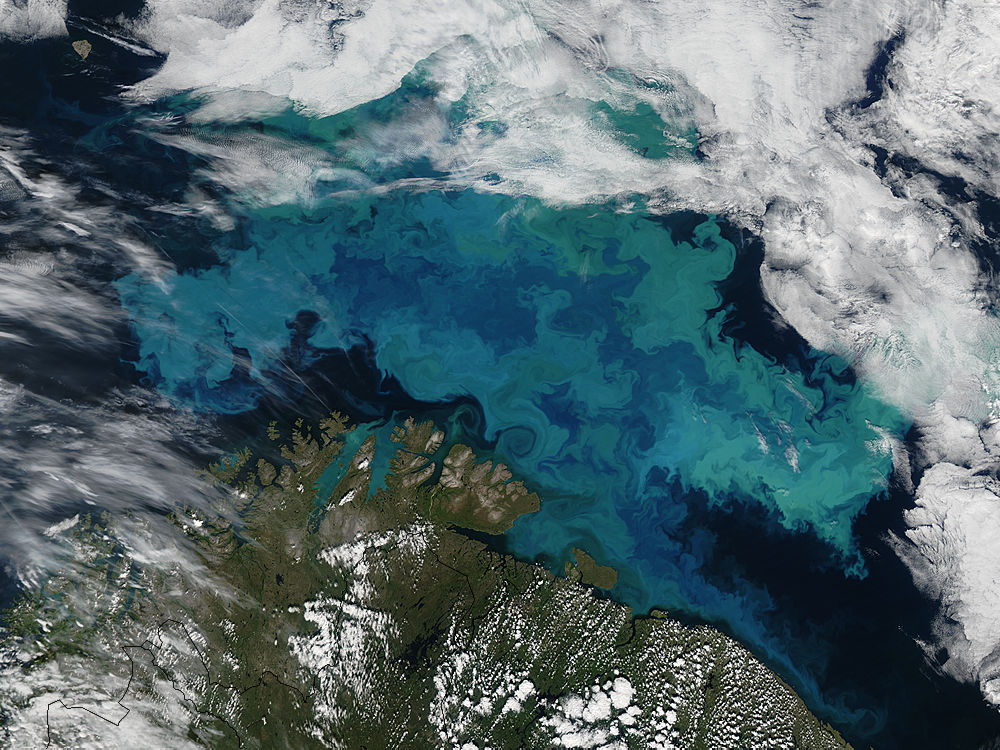 At times nature exceeds the ability of the artist’s brush to blend brilliant colors, interweave textures and combine patterns to create stunning panoramas, while using only the palette of land, water, cloud and vegetation. This stunning and artistic image of a phytoplankton bloom in the Barents Sea was by the Moderate Resolution Imaging Spectroradiometer (MODIS) aboard the Aqua satellite was captured on August 14, 2011. 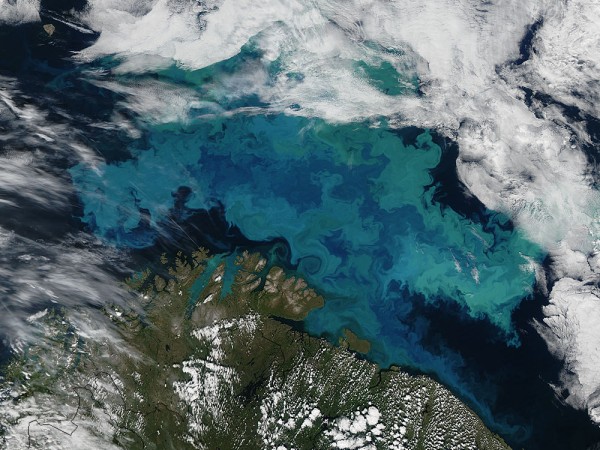 The peacock-hued swirls of blues and green that paint the navy-blue sea water are created by light reflecting off of millions of phytoplankton, microscopic plants that grow in the sunlit surface water of the world’s oceans. Different types of phytoplankton reflect different colored light, so a multi-color bloom such as this typically contains multiple species. The depth of the bloom also affects coloration – the deeper the organism, the less light is reflected and the duller the color.

Coccolithophores, a type of phytoplankton which flourish in nutrient-poor, sub-polar waters, have unique limestone (calcite) scales. This white coating makes the plant highly reflective, and thus a bloom can appear to be a bright, almost iridescent blue. The chalky coating can also cause whitish swirls in the water, making the blues washed out with a milky hue.

August is a highly active month for phytoplankton blooms in the Barents Sea, but the timing, development, abundance and species composition is variable in this area. The distribution of phytoplankton is largely controlled by the polar front, ice cover, freshwater runoff and ice melting. Each water source – the Artic, the Atlantic and the coastal water – all bring their own characteristic species into the Barents Sea, creating a multi-specie and multi-color spectacle.

Because phytoplankton are the base of the marine food chain, places were blooms are large and frequent often support a thriving marine population. This is certainly the case in the Barents Sea where the fisheries, particularly the cod fisheries, are of great importance for both Norway and Russia.

The coastlines of both of these countries can be seen in the bottom of the image. Russia forms the south-eastern most coast, while the remaining three-quarters of the coastline belongs to Norway. Two fjords in the west, Porsangerfjorden and Laksefjord are tinted bright blue with phytoplankton. Just to the east of these fjords, freshwater from the Tana River flows through Tanafjord, turning the waters here are a duller blue. As fresh water flows into the Barents Sea, phytoplankton bloom is affected by the flowing water, creating paisley-like patterns in the coastal eddies. (MODIS)