An unusual anticlockwise rotation of sea-surface height patterns has been observed near Norway’s west coast.  A topographic depression about 3500 m deep in the Norwegian Sea, the Lofoten Basin  is a region of high mesoscale activity and plays an important role in sustaining global ocean circulation. The Lofoten Basin is known to be the major heat reservoir for the Nordic Seas (Greenland, Norwegian and Iceland Seas), where large interactions between the ocean and atmosphere occur. It is the area where salty and warm Atlantic Water transit on its way to the Arctic Ocean and loses its heat to the atmosphere. Mixing with surrounding water it becomes dense and sink, forming ‘deep water’ in adjacent regions.

Using satellite data, scientists have observed approximately 10 cm high topographic waves in the Lofoten Basin. Those waves propagate in an anticlockwise direction and are largely responsible for the amplification of sea-surface height variability in the area. Most of the waves observed had a wavelength of about 500 km, and moved from two to eight km per day. They can affect the low-frequency variability of local biological processes. According to study by Armin Köhl of University of Hamburg,  the vortex results primarily from anticyclonic eddies shed from the eastern branch of the Norwegian Atlantic Current, which propagate southwestward. The large-scale bottom depression of the Lofoten Basin plays a crucial role for attracting anticyclone into the trough and for enabling the dynamical stability of the vortex. 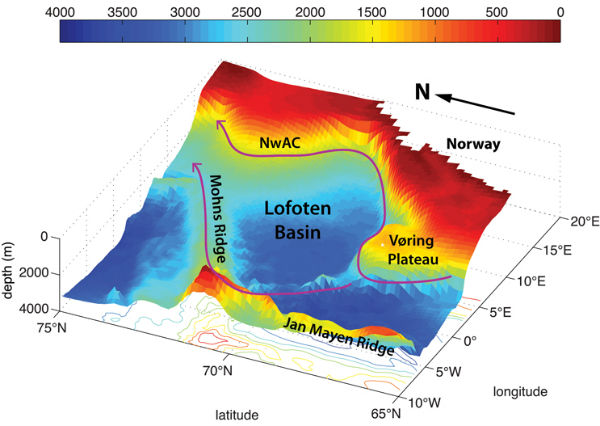 The Lofoten Basin is a topographic depression about 3500 m deep in the Norwegian Sea. It is known to be the major heat reservoir for the Nordic Seas (Greenland, Norwegian and Iceland Seas), where large interactions between the ocean and atmosphere occur. (Credits: D. Volkov/ESA)

The findings presented at the ‘20 Years of Progress in Radar Altimetry’ symposium in Venice, Italy show archived data from radar altimeters on the ERS-1, ERS-2 and Envisat satellites which observed the wave-like motion around the centre of the Lofoten Basin. Radar altimeters onboard provide precise measurements of sea-surface height, as well as freshwater bodies, land and ice.

The ERS-1/2 and Envisat measurements enabled the provision of sea-surface height with an accuracy of a few centimetres from their orbits around 800 km above Earth.