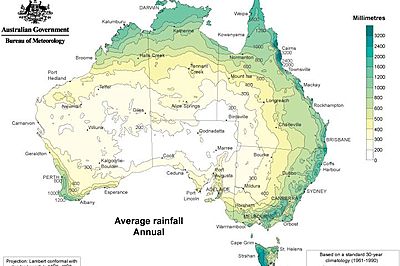 The city of Darwin, Northern Territory, topped its old seasonal rainfall record last week. The old mark was 2499.4 mm (98.4 inches), according to a report issued by the Australian Bureau of Meteorology (BOM), and there are still two months of rainy season yet to come. Darwin recorded six-straight months of above-normal rainfall starting in September. Not only above normal, but about two times the normal rainfall each month. The big push "over the top" came at the hands of Tropical Cyclone Carlos, which swamped the tropical capital city during February.

Carlos formed right atop Darwin on Feb. 16, then hovered in and about the city for another two to three days. Many historical records for Darwin were shattered by this storm, including the 24-hour rainfall record, according to the BOM. A fall of 367.6 mm bested the old mark of 290.4 mm set in January 1997. It also made for the wettest three-day stretch, with 684.8 mm gathered in by the official rain gauge. The previous high three-day mark was 462.0 mm, according to the BOM. For the wettest seven days dominated by Carlos, the 13th through the 19th, rainfall was a record-hit 847.4 mm versus the old high of 615.8 mm. Already, talk among climate forecasters is about whether the three-meter mark (or 118.1 inches) can be reached in Darwin.

In the BOM report, a Northern Territory climatologist said that the three-meter mark has only been reached once in the Territory, this being a record of 3048.6 mm (120.0 inches) of rain at Pirlangimpi, Tiwi Islands, during the wet season of 1999/2000. Even near-normal rainfall during March and April would bring Darwin to about the three-meter mark. Normal yearly rainfall in Darwin is 1705 mm, or 67.1 inches. (AccuWeather)