Rare event  Rare waterspouts spotted in the Strait of Georgia for 2 days in a row, Canada

Tropical Storm Bopha started to intensify and was upgraded to a typhoon status by JTWC few hours ago. Maximum sustained winds have increased to 105 km/h (65 mph). Tropical storm force winds extend outward up to 120 km (75 miles) from the center.

According to latest bulletin by NWS Guam, TY Bopha is tracking towards the Republic of Palau. The center of TS Bopha is located near latitude 3.6N and longitude 145.7 E, about 1046 km (650 miles) ESE of Ngulu and 1062 km (660 miles) SE of Yap. System is moving westward at speed of 11 mph. A gradual turn to the west-northwest with little change in forward speed is expected through tonight. 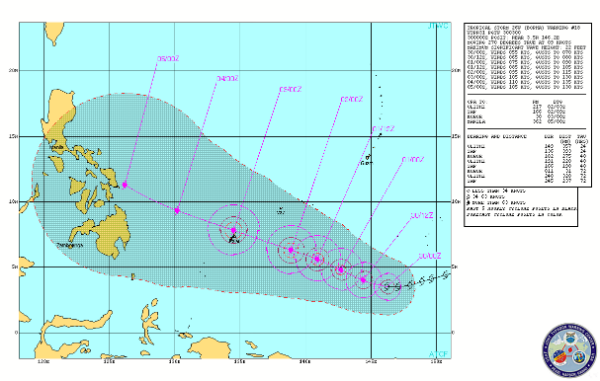 A typhoon watch is now in effect for Ngulu in Yap state and Koror and Kayangelin in the Republic of Palau.

A tropical storm watch is in effect for Yap island in Yap state and Sonsorol in the Republic of Palau. 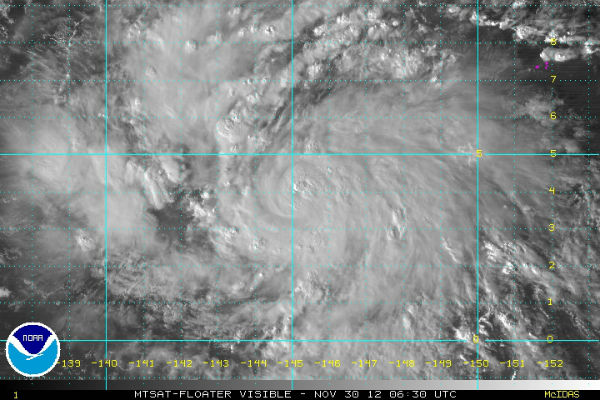 TROPICAL STORM BOPHA IS NOW MOVING WEST AT 11 MPH. A GRADUAL TURN TO
THE WEST-NORTHWEST WITH LITTLE CHANGE IN FORWARD SPEED IS EXPECTED
THROUGH TONIGHT.

MAXIMUM SUSTAINED WINDS HAVE INCREASED TO 65 MPH. TROPICAL STORM
BOPHA IS EXPECTED TO INTENSIFY TODAY...POSSIBLY BECOMING A TYPHOON
BY TONIGHT. TROPICAL STORM FORCE WINDS EXTEND OUTWARD UP TO 75 MILES
FROM THE CENTER. 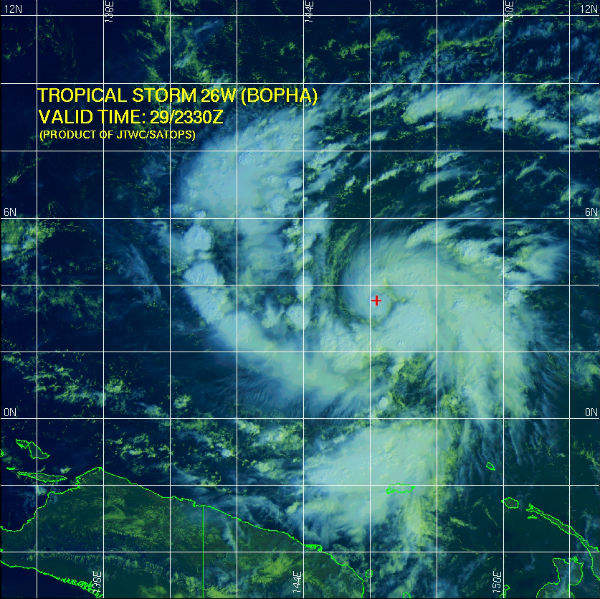 Continued favorable environmental conditions, including enhanced poleward outflow toward the based of this developing trough and passage over very warm water, should allow for steady intensification. 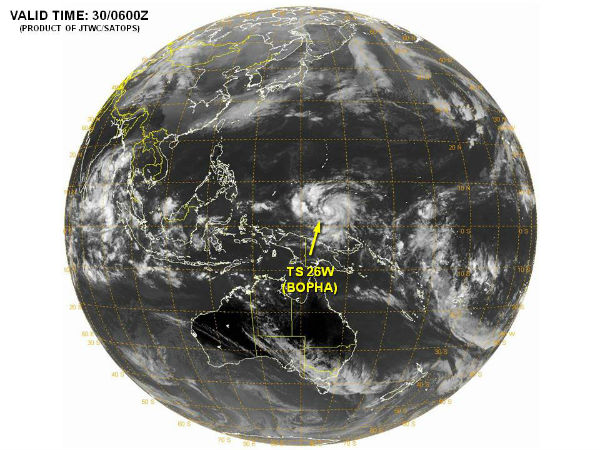