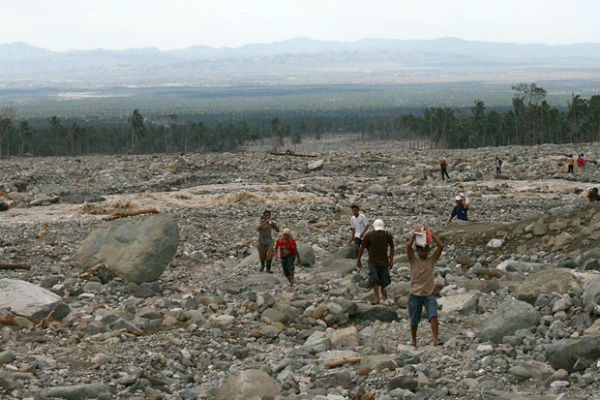 The village of Andap was devastated in the Typhoon Bopha, with at least 80 fatalities. The death toll from Typhoon Bopha / Pablo steadily mounts (unofficial number of more than 500 victims), the recriminations about the causes of the devastating debris flows that were responsible for so much of the loss has begun in earnest. 464 were reported dead and 465 were injured while 702 are still missing most of which were from Region XII. In the worst affected area, Compostela Valley, an argument has started as to the degree to which mining was responsible for the loss.

Typhoon Pablo devastated several municipalities of Compostela Valley  on Tuesday, leaving 204 persons killed as of 11:30 p.m. Wednesday, December 5, 2012, according to an NDRRMC report. In New Bataan town alone, at least 126 persons were already killed while hundreds of others remain missing as of midnight Wednesday. Strong winds destroyed structures, banana plantations and other agricultural crops.

This level of loss was very predictable, although without the preemptive evacuations it is likely that it would have been very much higher of course. This shows all too clearly that it is not possible to achieve genuinely effective disaster risk reduction with short-term measures.  Long term planning is required, and countries such as the Philippines need external support to be able to implement effective measures according to Dave Petley of TheLandslideBlog. The Philippine Mines and Geology Bureau has generated a useful online set of hazard maps.

The cost of damage brought about by typhoon Pablo in parts of Mindanao, particularly Davao and Compostela Valley, has reached P4 billion, the National Risk Reduction Management Council said on Friday. As of 08 December 2012, 7:00 PM, the total number of population affected in 2,289 Barangays / 243 municipalities / 35 cities in 30 provinces of Regions IVB, VI, VII, VIII, X, IX, XI, XII and CARAGA increased to 1,094,607 families /5,398,498 persons. The total number of population currently served inside and outside the evacuation centers decreased to 78,030 families / 371,921 persons.