On November 30, 2012 ISS captured image of the most recent phase of its volcanic activity, as you can see in the image bellow. 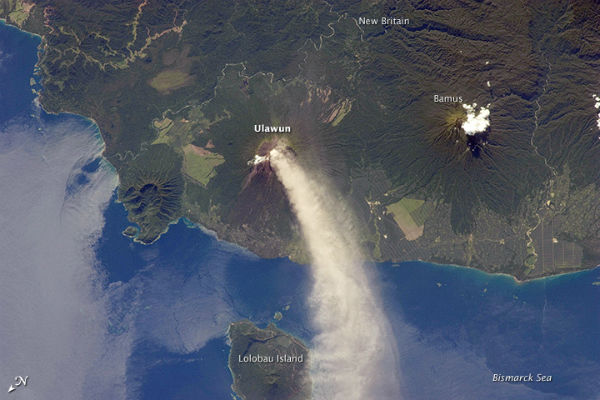 A white steam and ash plume extended from the summit crater of the stratovolcano towards the northwest. The plume begins to broaden as it passes the southwestern coast of Lolobau Island approximately 23 kilometers downwind from its source. (Note the image is oriented such that north is towards the lower left)

The summit of Bamus is obscured by white cumulus clouds (not of volcanic origin) in this image. While Ulawun has been active since at least 1700, the most recent eruptive activity at Bamus occurred in the late 19th century. A large region of ocean surface highlighted by sunglint—sunlight reflecting off the water surface, lending it a mirror-like appearance—is visible to the north-northeast of Ulawun (image lower left).

A steep-walled valley cuts the NW side of  Ulawun volcano, and a flank lava-flow complex lies to the south of this valley. Historical eruptions date back to the beginning of the 18th century. Twentieth-century eruptions were mildly explosive until 1967, but after 1970 several larger eruptions produced lava flows and basaltic pyroclastic flows, greatly modifying the summit crater. 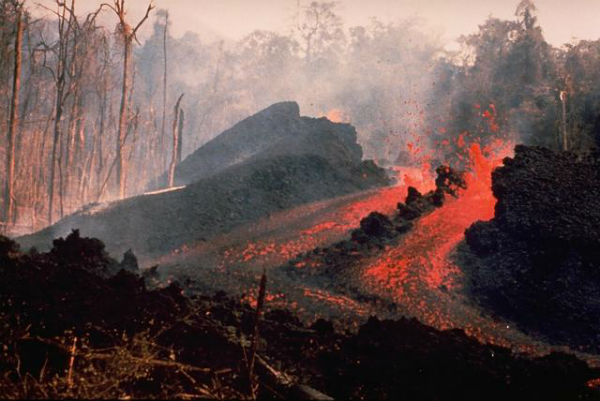 Spatter rises above an east-flank fissure that feeds an incandescent lava flow. Explosive activity took place from the summit crater of Ulawun May 7-13, 1978 accompanied by pyroclastic flows from a fissure high on the SE flank on May 9. The lava flow seen here was emitted from fissures on the lower east flank about 5 km from the summit on May 10-14. At least a dozen vents were active during one of the first observed flank eruptions in Papua New Guinea. The lava flow traveled 6 km to the Pandi River. (Photo by K. Spellmeyer, 1978/courtesy of Wally Johnson, Australia Bureau of Mineral Resources).

Astronaut photograph ISS034-E-5496 was acquired on November 30, 2012, with a Nikon D2Xs digital camera using a 180 millimeter lens, and is provided by the ISS Crew Earth Observations experiment and Image Science & Analysis Laboratory, Johnson Space Center. The image was taken by the Expedition 34 crew. It has been cropped and enhanced to improve contrast, and lens artifacts have been removed. The International Space Station Program supports the laboratory as part of the ISS National Lab to help astronauts take pictures of Earth that will be of the greatest value to scientists and the public, and to make those images freely available on the Internet. Additional images taken by astronauts and cosmonauts can be viewed at the NASA/JSC Gateway to Astronaut Photography of Earth. Caption by William L. Stefanov, Jacobs/ESCG at NASA-JSC.