2009 Typhoon Morakot caused a spike in earthquakes in Taiwan in the years following the storm, a new study reveals. The storm triggered extensive flooding, huge landslides, and left almost 700 fatalities, making it the deadliest typhoon to impact the country in recorded history. It brought almost 3 m (10 feet) of rain in over three days, triggered some of the most intense erosions ever recorded, and caused more than 10 000 landslides. The study provides the first evidence of the impact of a single weather-driven erosion event on tectonic.

It is well established that climate and tectonics affect the evolution of the Earth's surface by adjusting the rate and pattern of erosion of sedimentation. However, the impacts of ongoing surface profess on tectonics has not been observed directly.

A group of international researchers raised a question if a single erosional event can affect seismogenic processes, which dominate the deformation of the Earth's crust. The team focused on detecting seismicity changes linked to an erosional perturbation induced by a rainfall event, considering typhoon Morakot, for instance.

The typhoon, which made landfall in Taiwan from August 7 to 9 in 2009, brought up to 3 m (10 feet) of rain in three days– the country's largest in the past 50 years. It also triggered more than 10 000 landslides in the mountainous southwest region, where cumulative rainfall surpassed 1 m (3 feet).

The researchers pointed out that the equivalent average erosion induced by these landslides is 170 mm (7 inches), which corresponds to 10 to 100 years of erosion at the decadal average rate. 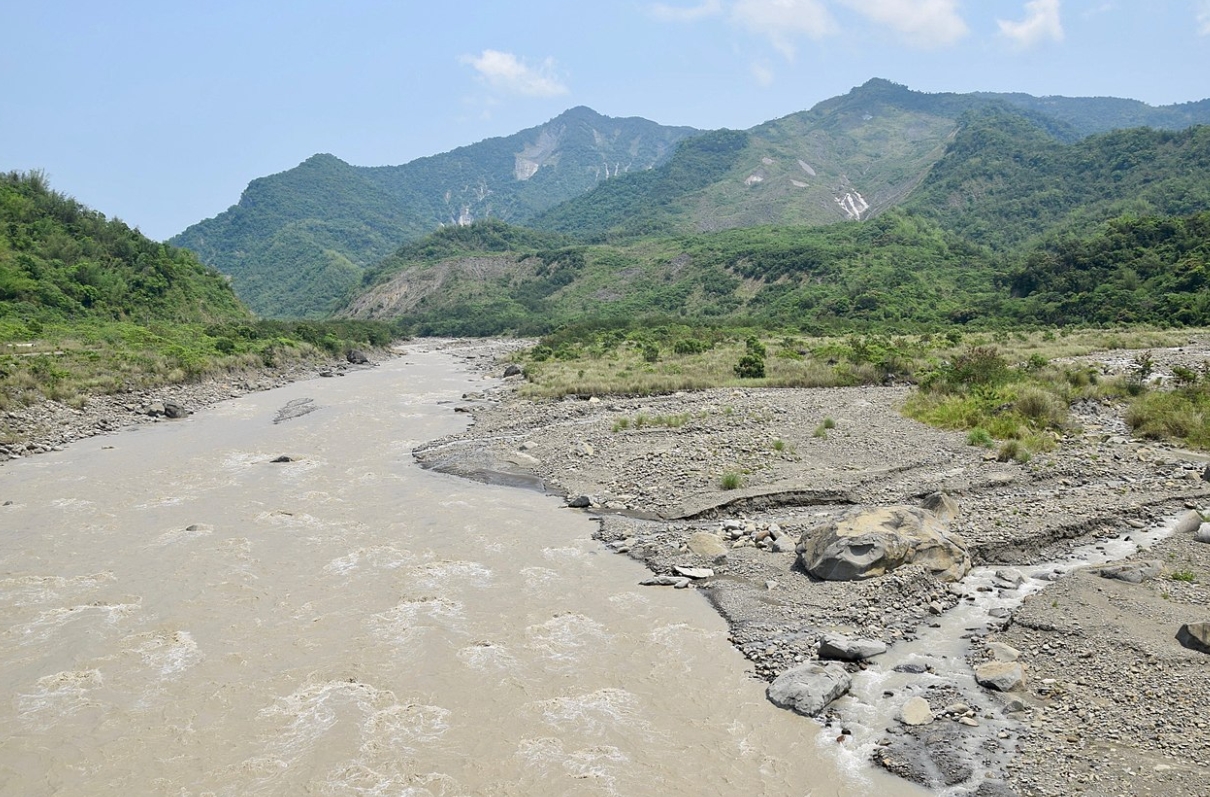 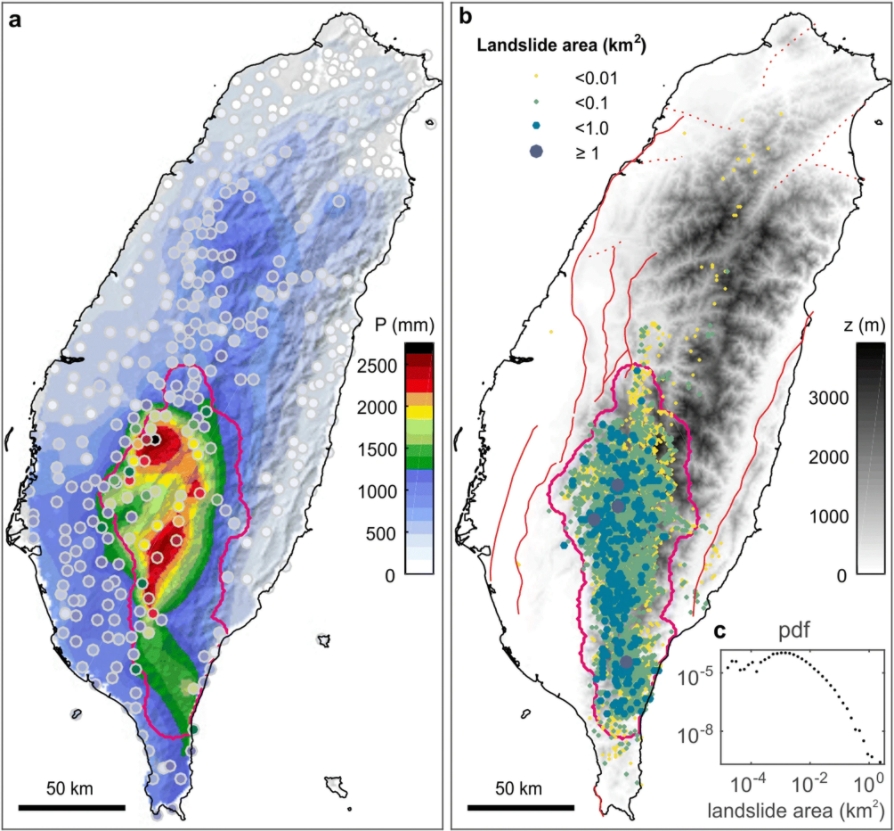 "The exact volume of sediment export is difficult to estimate, but the landsliding zone must have undergone a progressive surface mass unloading after one of the largest weather-driven erosion events on record," they wrote.

"Despite a very likely large uncertainty, we roughly estimate that about 20 to 50 percent of the 1.2 cubic km (0.3 cubic miles) of landslide volume was exported of the landsliding zone after typhoon Morakot over the time period 2009 to 2012."

The earthquakes were clustered in areas where some of the most widespread slides took place. The researchers concluded that the massive weight of the rocks moved by the slides changed the load on the shallow portion of the Earth's crust, which generated a more favorable environment for quakes.

"Our study offers the first evidence of the impact of a single weather-driven erosion event on tectonic," they noted. 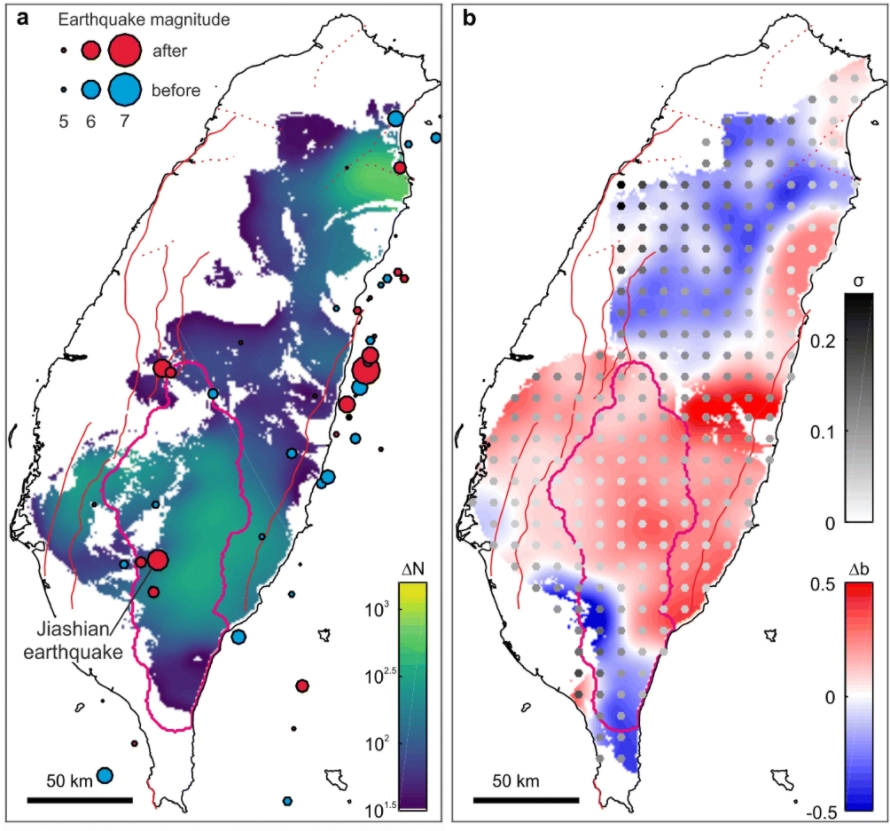 Tremblors that are similar to those that happened after Morakot are known as "rebound quakes", according to weather.com meteorologist, Orelon Sidney.

"When a heavy enough load is lifted off an area/region, the earth's crust springs back, kind of like when you push a finger into a wet sponge. When you remove your finger, the sponge springs back."

The phenomenon is said to be behind the series of earthquakes in the central U.S. in the 1800s known as the New Madrid Sequence, although the series was not connected to a single weather event.

Sidney also pointed out that this type of study is very new, and the conclusions may change as more knowledge is acquired.

"Earthquakes are among the most dangerous and destructive natural hazards," the researchers wrote. "Better understanding earthquake triggering by tectonics and by external processes is crucial for a more realistic assessment of earthquake hazards, especially in densely populated regions such as the west coast of Taiwan."

Tectonics and climate-driven surface processes govern the evolution of Earth’s surface topography. Topographic change in turn influences lithospheric deformation, but the elementary scale at which this feedback can be effective is unclear. Here we show that it operates in a single weather-driven erosion event. In 2009, typhoon Morakot delivered ~ 3 m of precipitation in southern Taiwan, causing exceptional landsliding and erosion. This event was followed by a step increase in the shallow (< 15 km depth) earthquake frequency lasting at least 2.5 years. Also, the scaling of earthquake magnitude and frequency underwent a sudden increase in the area where mass wasting was most intense. These observations suggest that the progressive removal of landslide debris by rivers from southern Taiwan has acted to increase the crustal stress rate to the extent that earthquake activity was demonstrably affected. Our study offers the first evidence of the impact of a single weather-driven erosion event on tectonics.