Scientists have developed a new prediction about the shape of the bubble surrounding our solar system and have revealed that it is actually shaped like a "deflated croissant." Using data from the space agency's missions, the scientists came up with the updated model, which contradicted the long-tailed comet shape suggested by other research.

The heliosphere is a vast region around the Sun that surrounds all the planets of our solar system. It acts as a shield that protects the planets from cosmic radiation.

Scientists have traditionally believed that the heliosphere is shaped like a comet– with a rounded leading edge or the nose and a long tail behind.

However, according to the new research– which draws on data from the Voyager spacecraft, Cassini mission, and New Horizons mission– the heliosphere is more of a "deflated croissant" shape.

To analyze the boundary of interstellar space, scientists have been observing and capturing galactic cosmic rays flying towards the Earth from various parts of the galaxy, along with existing ones.

These particles move out towards the heliosphere and are bounced back by a spate of electromagnetic processes. Scientists under NASA's Interstellar Boundary Explorer used the particles as radar to identify our boundary to the interstellar space. 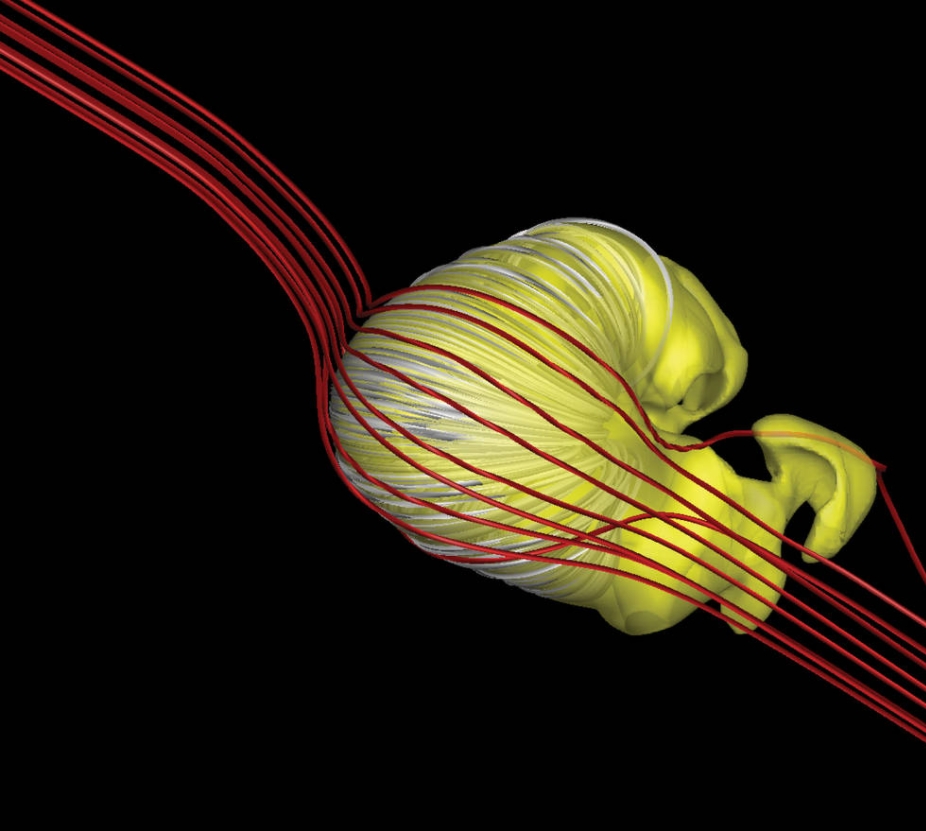 The updated model of the Sun's bubble of influence, the heliosphere. Image credit: Opher et al. 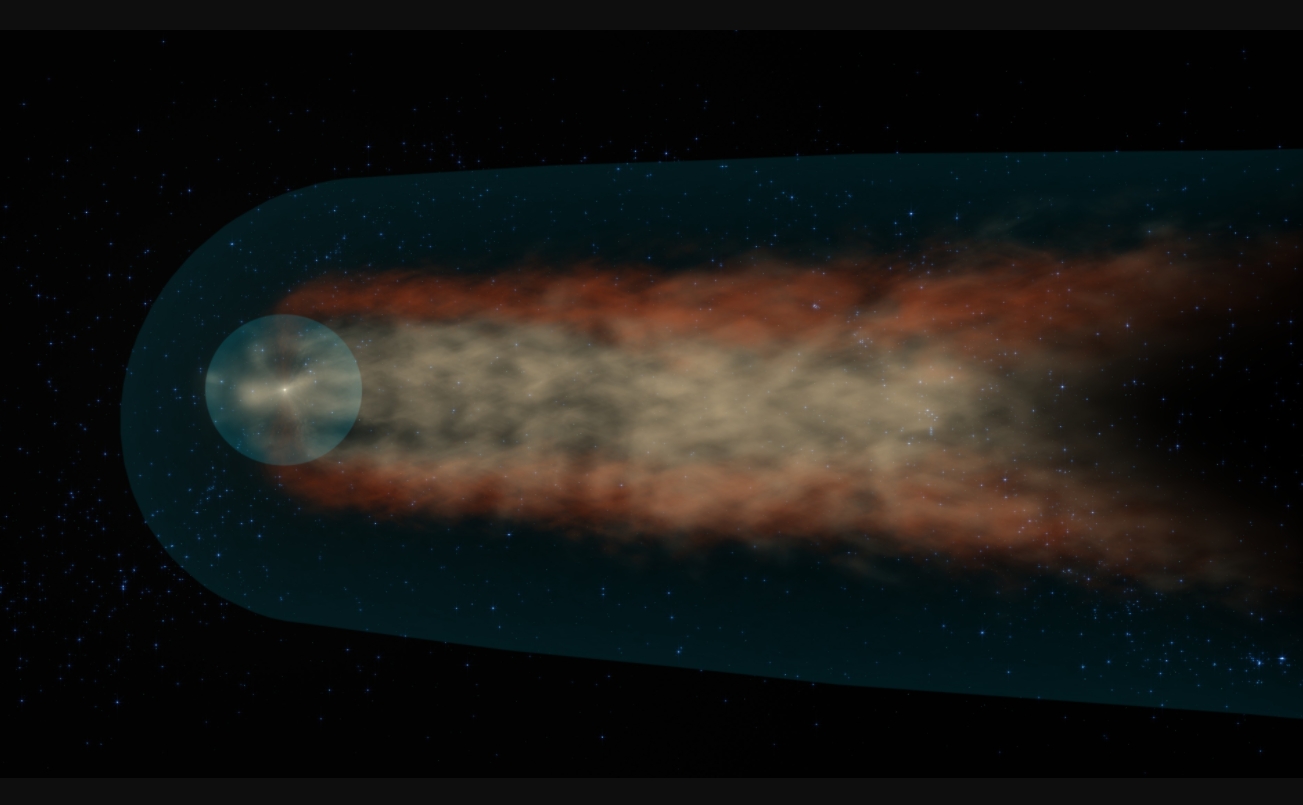 "If you have some cold fluid and hot fluid, and you put them in space, they won’t mix– they will evolve mostly separately. What we did was separate these two components of the solar wind and model the resulting 3D shape of the heliosphere."

"Because the pick-up ions dominate the thermodynamics, everything is very spherical. But because they leave the system very quickly beyond the termination shock, the whole heliosphere deflates."

The heliosphere acts as a shield against the rest of the galaxy, NASA notes. Powerful events in other star systems, like a supernova, can accelerate particles or galactic cosmic rays to almost the speed of light.

These particles spread out in all directions, including in our solar systems. The heliosphere absorbs about three-quarters of the galactic cosmic rays that would travel into our solar system. 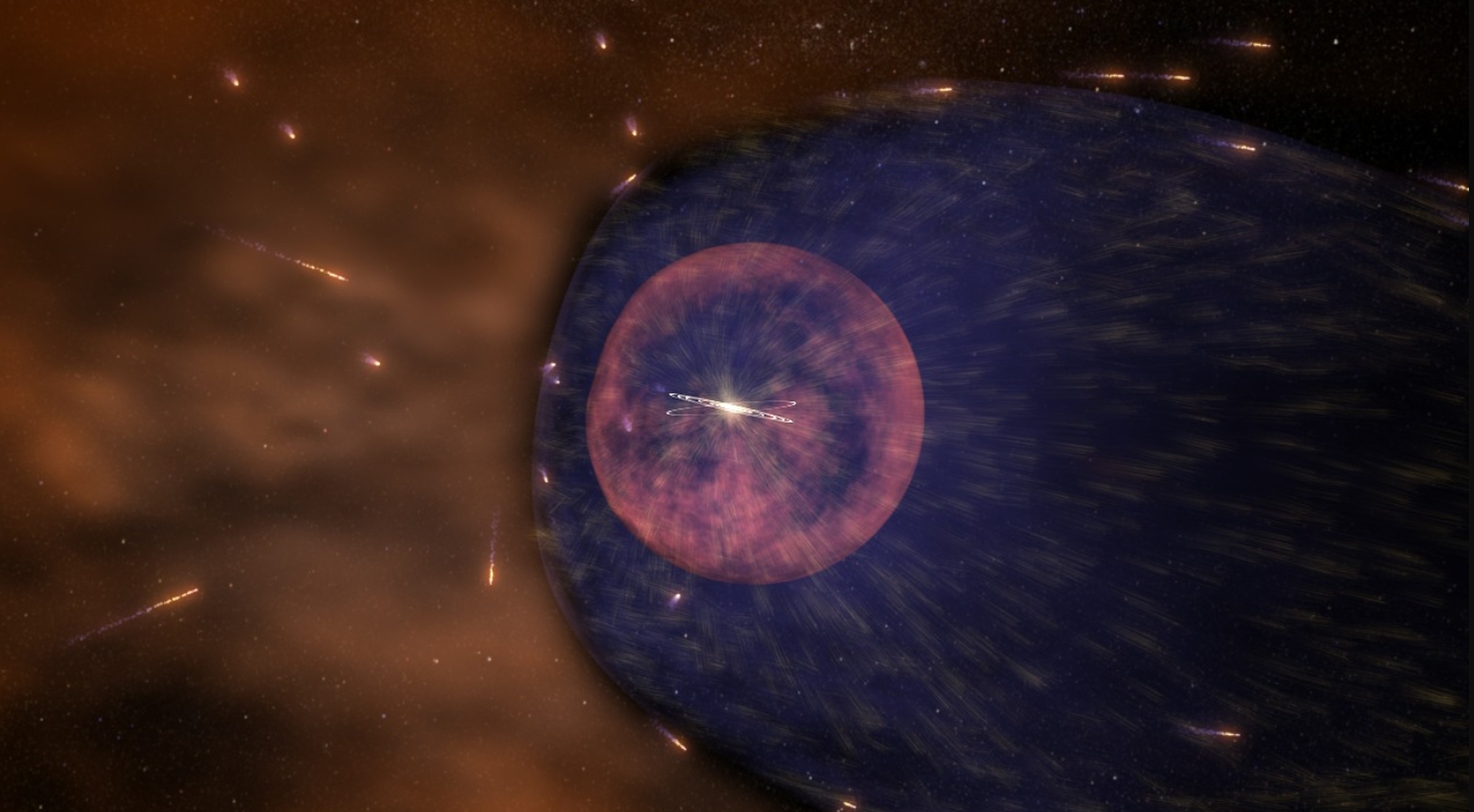 "Those that do make it through can wreak havoc. We’re protected on Earth by our planet’s magnetic field and atmosphere, but technology and astronauts in space or on other worlds are exposed," said NASA.

"As we learn more about how our heliosphere protects our solar system– and how that protection may have changed throughout the solar system’s history– we can look for other star systems that might have similar protection."

An upcoming NASA mission called the Interstellar Mapping and Acceleration Probe (IMAP) is set to unravel these questions. It is scheduled for launch in 2024 and will map the particles streaming back to the Earth from the heliosphere's boundaries.

IMAP will build on the methods and discoveries of the IBEX mission to touch on the nature of the heliosphere, interstellar space, and how galactic cosmic rays make their way into the solar system.

As the Sun moves through the surrounding partially ionized medium, neutral hydrogen atoms penetrate the heliosphere, and through charge exchange with the supersonic solar wind, create a population of hot pick-up ions (PUIs). Until recently, the consensus was that the shape of the heliosphere is comet-like. The termination shock crossing by Voyager 2 demonstrated that the heliosheath (the region of shocked solar wind) pressure is dominated by PUIs; however, the impact of the PUIs on the global structure of the heliosphere has not been explored. Here we use a novel magnetohydrodynamic model that treats the PUIs as a separate fluid from the thermal component of the solar wind. The depletion of PUIs, due to charge exchange with the neutral hydrogen atoms of the interstellar medium in the heliosheath, cools the heliosphere, ‘deflating’ it and leading to a narrower heliosheath and a smaller and rounder shape, confirming the shape suggested by Cassini observations. The new model reproduces both the properties of the PUIs, based on the New Horizons observations, and the solar wind ions, based on the Voyager 2 spacecraft observations as well as the solar-like magnetic field data outside the heliosphere at Voyager 1 and Voyager 2.