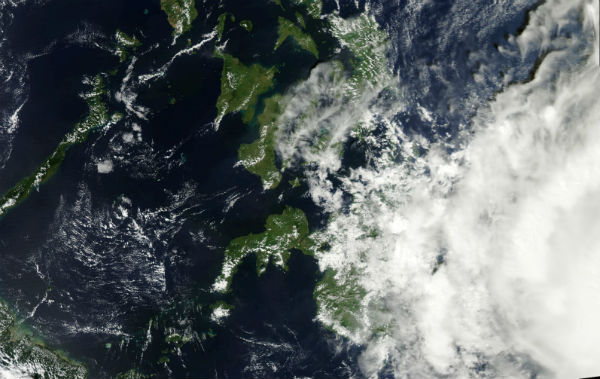 Super Typhoon Bopha made landfall in the southern Philippines on December 4, 2012 as a Category 5 Super Typhoon with sustained winds of over 260 km/h (161 mph). Bopha remained a powerful typhoon as it made landfall on Mindanao, retaining a distinct eye and spiral shape as storm clouds stretched over the eastern part of the island. 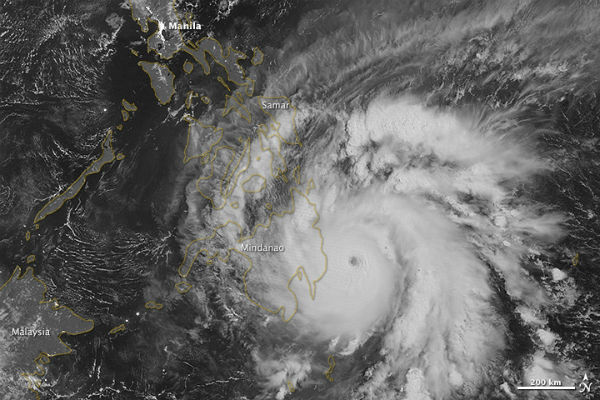 The Visible Infrared Imaging Radiometer Suite (VIIRS) on the Suomi NPP satellite acquired this image around 1:12 a.m. local time on December 4 (17:12 UTC on December 3). This image is from the VIIRS “day-night band,” which detects light in a range of wavelengths from green to near-infrared and uses filtering techniques to observe signals such as gas flares, auroras, wildfires, city lights, and reflected moonlight.

Latest report by PAGASA says Bopha is located 180 km E of Puerto Princesa City and is moving west-northwest at speed of 24 km/h. Maximum sustained winds of 130 km/h near the center
and gustiness of up to 160 km/h are recorded. Public Signal Number 3 was issued for Northern Palawan , Calamian Grp. of Islands. Estimated rainfall amount is from 10 – 18 mm per hour (heavy – intense) within the 400 km diameter of the Typhoon.

Residents living in low-lying and mountainous areas under public storm warning signals are alerted against possible flashfloods and landslides. Fishing boats and other sea vessels are advised not to venture out into the Seaboards of Southern Luzon, Visayas and Mindanao. 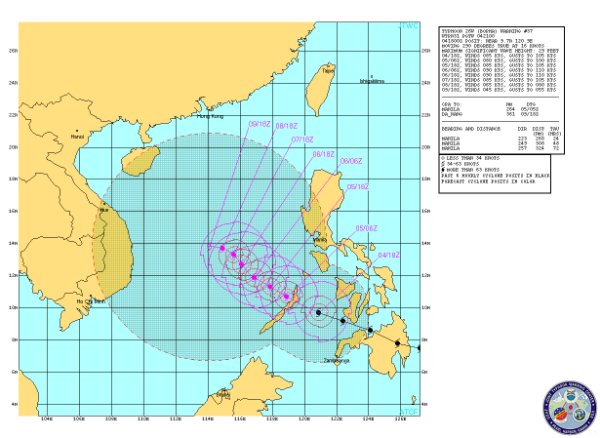 Super Typhoon Bopha is reported to be the most southerly typhoon ever recorded in the Western Pacific, and follows a similar track to last year’s Tropical Storm Washi, which struck the southern Philippine island of Mindanao in mid-December, 2011. That storm killed over 1,200 people, primarily from severe floods. Super Typhoon Bopha, at a Category 5 storm on the Saffir-Simpson hurricane wind scale, is the strongest typhoon ever recorded in Mindanao. 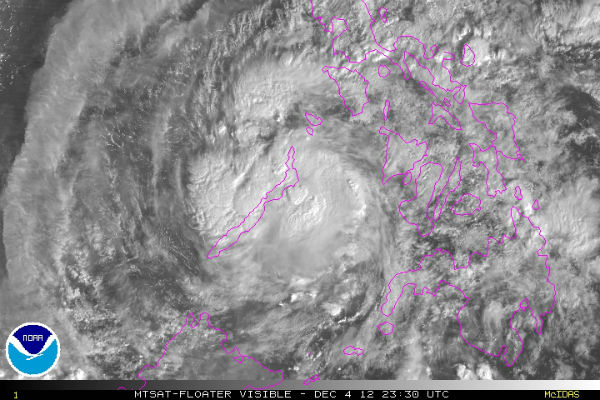 According to the Global Disaster Alert and Coordination System (GDACS), over 5.6 million people may be impacted by hurricane strength wind speeds of 120 km/hr (75 mph) or higher. At least 87,000 people were forced to flee their homes as Bopha, locally known as Pablo, battered parts of Visayas and Mindanao. The NDRRMC said a total of 120,627 people were affected by the typhoon. More than 53,000 people had moved into nearly 1,000 government shelters by early Tuesday, the NDRRMC said. Powerful typhoon killed at least 74 people in Philippines. 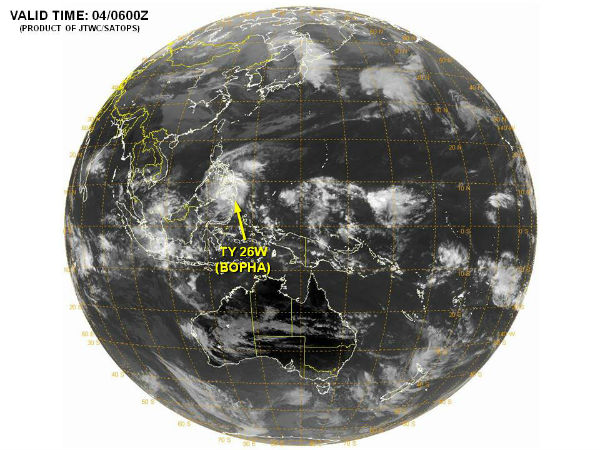