In Vanuatu, Dovi turned roads into violent rivers in low lying areas including one major road leading out of Port Vila.1

"We've had a few dozen families in the outlying areas of Port Vila evacuated to refugee centers, nonetheless, the red alert warning has been lifted as of last night by the National Disaster Management Office and now we are focused on clean up and recovery," Port Vila-based journalist Dan McGarry said.

A  level 2 hurricane alert was issued for parts of New Caledonia where Dovi caused flooding and downed trees and telephone lines.

Several accommodation centers were opened across the Provinces of the Loyalty Islands, North, and South, while all commercial, public, and school activities remain suspended. In addition, water supply disruptions have been affecting the areas of Auteuil, La Couvelee, Koe, and Koghis.2

By 18:00 UTC on February 11, maximum sustained winds dropped to 110 km/h (70 mph) — below Category 1 hurricane equivalent on the Saffir Simpson scale.

While New Zealand started feeling its effects on Saturday, February 12, the storm moved over North Island on Sunday, bringing destructive winds, heavy rains and large waves. At the peak of the storm, an estimated 100 000 customers lost power.

Powerco said nearly 34 000 of its customers lost power, 20 000 of whom were still in the dark as of Sunday night. An estimated 6 000 people have no electricity in Te Tai Tokerau tonight, the majority are supplied by Top Energy in the Far North. Northpower expects 1 000 people in the Kaipara and Whangārei districts will spend the night without power. Vector said around 50 000 homes and businesses were without power at the peak of the storm in the Auckland region.3

Some customers might remain without power for several days.

Air New Zealand said the weather has forced it to cancel at least 100 flights. 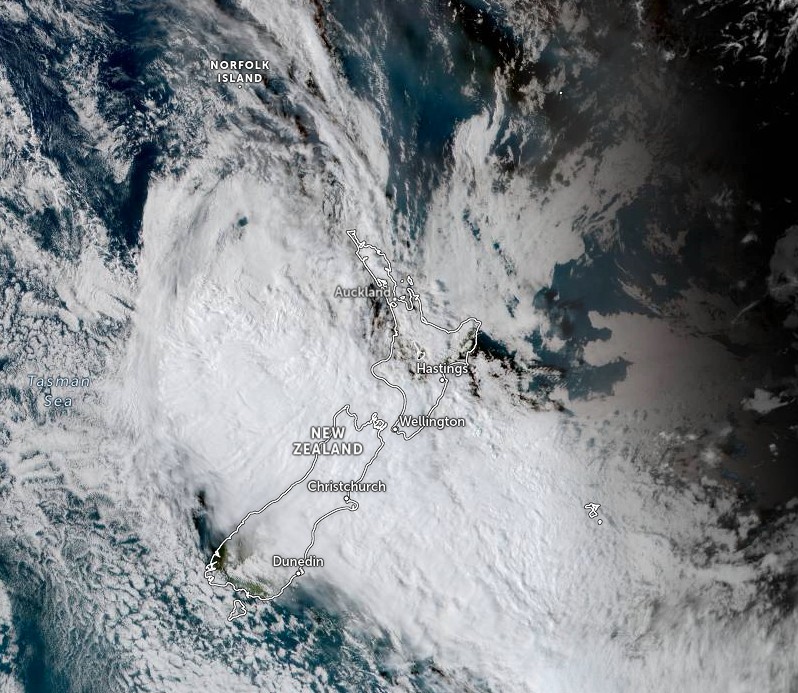 Waka Kotahi National Emergency Management Team leader Mark Owen said several highways were closed due to slips and flooding, with major disruption unavoidable given the scale of the severe weather.4

"Our crews are working hard to clear slips and reopen roads as soon as possible, but heavy rain and severe winds are still affecting many areas, and we need floodwaters to recede in some areas before damage can be assessed.

"Driving conditions are hazardous in many areas, with the risk of surface flooding, slips, falling tree branches or power lines coming down, and people should avoid all non-essential travel in these areas."

The storm is now moving away from New Zealand and most weather watches and warnings are canceled.