Nearly 100 bushfires are raging across New South Wales Australia as of December 23, 2019, at 12:00 UTC (23:00 LT), with hotspots in every state– a fire tracker map maintained by Western Australia researchers show that blazes are also threatening areas around every major city and that the fires have ringed the entire continent. "Australia is literally on fire right now," said Richie Merzian of the Australia Institute, as nine have been killed so far and over 800 homes were destroyed. The hottest day since records began was registered on Wednesday, December 18 — at 41.9 °C (107.4 °F).

As of Monday, December 23, around 94 fires continue to burn across NSW, 58 are yet to be contained.

On Sunday, December 22, the NSW RFS said fires had destroyed 829 and damaged 33 homes; 62 facilities (79 damaged), and 1 925 outbuildings (827 damaged). Moreover, the fires had burnt over 3 million ha (7 million acres) and killed at least nine people with one unaccounted for.

"Bushfire smoke is affecting large parts of central and eastern NSW. On-shore winds moved the thickest smoke further inland from Sydney coast, but smoke can be seen and felt when flying over the Tasman Sea," BOM said December 22, adding that no significant rainfall was expected in the country over the next couple of months.

On Saturday, December 21, the fire service in the state of New South Wales issued warnings for much of the area surrounding Sydney. Four firefighters in NSW were treated for heat exhaustion.

Officials confirmed two fatalities in the hills outside Adelaide in the neighboring state of South Australia.

Queensland and Victoria have also been badly affected. In Sydney, residents of towns throughout the Budawang, Budderoo, Kanangra-Boyd, and the Blue Mountains national parks were told 'it's too late to leave' by authorities as alerts of catastrophic conditions have been issued.

Australia recorded its hottest day on record on Wednesday, December 18 with an average maximum temperature of 41.9 °C (107.4 °F), beating the previous record by that had been set only 24 hours earlier. 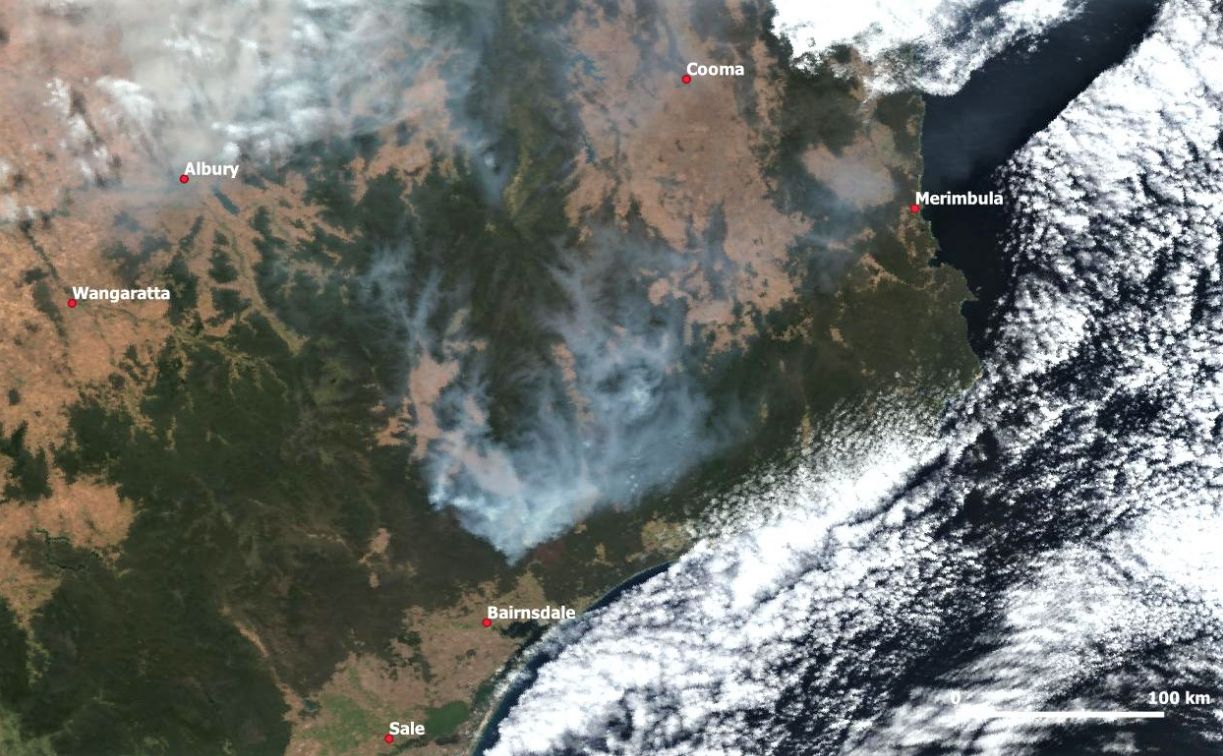 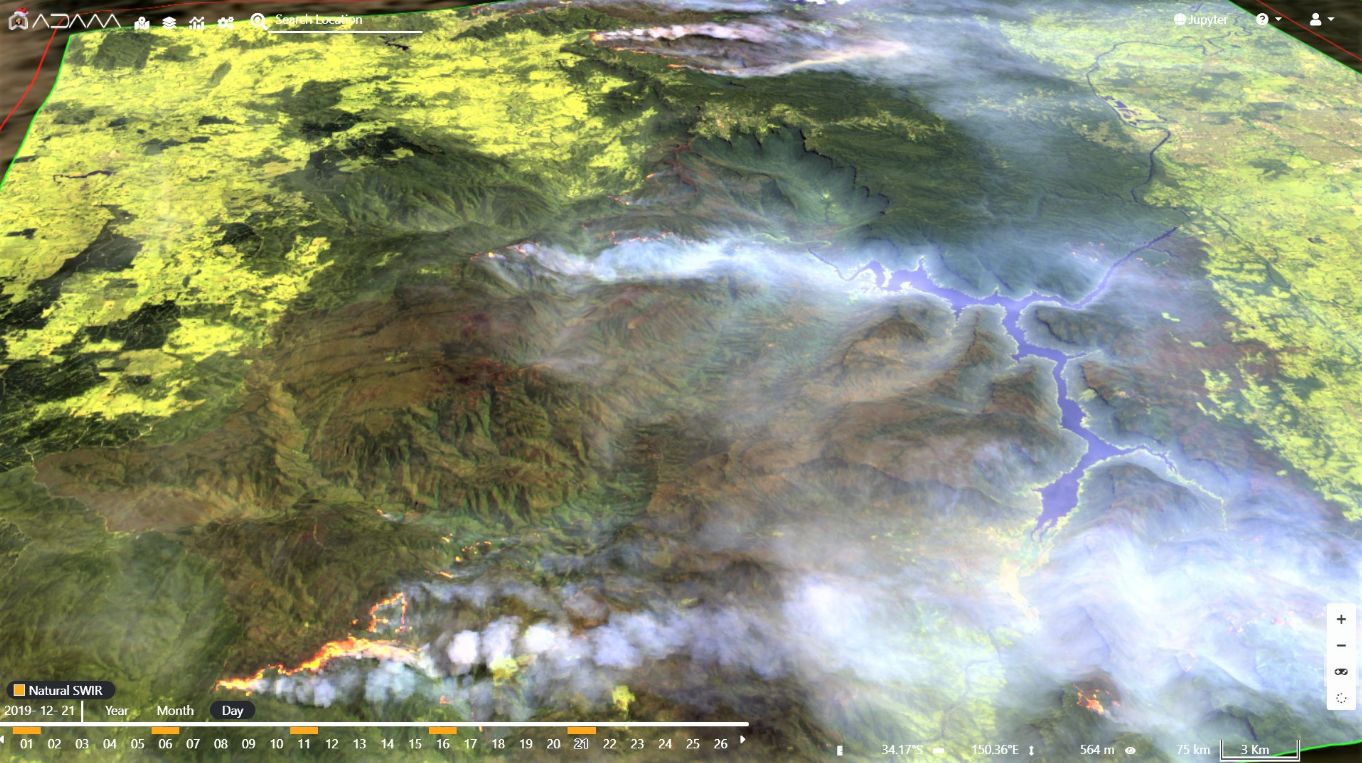 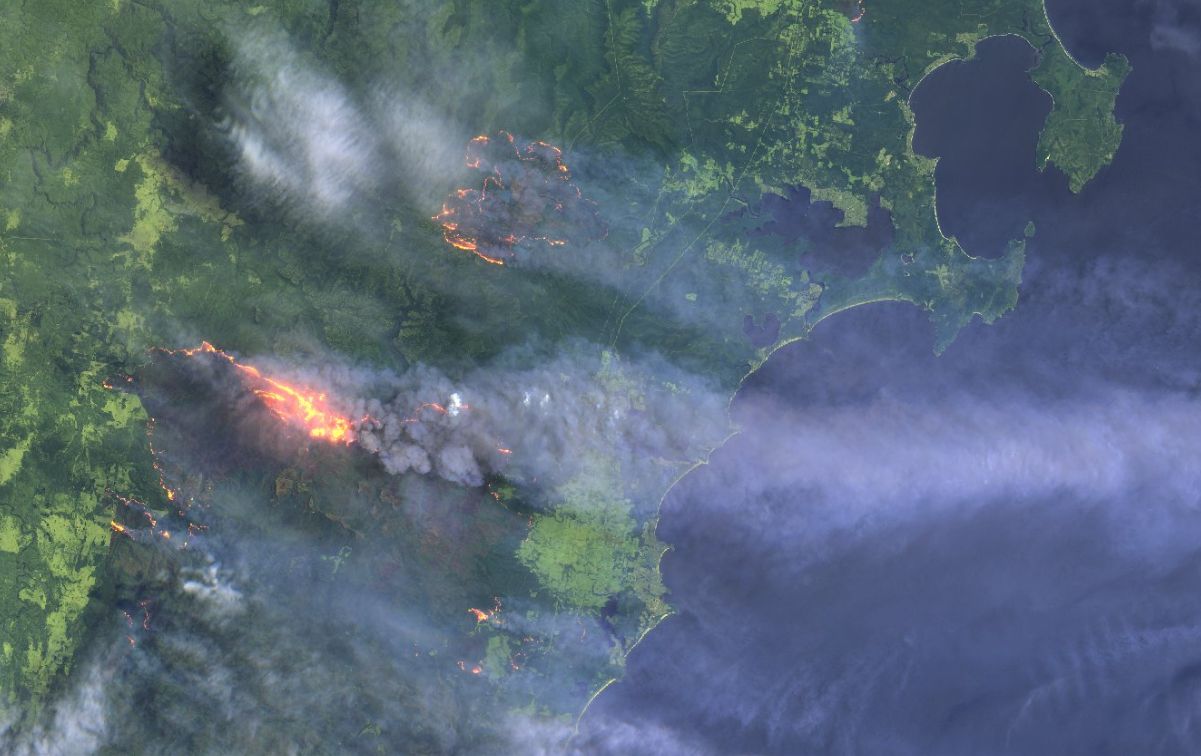 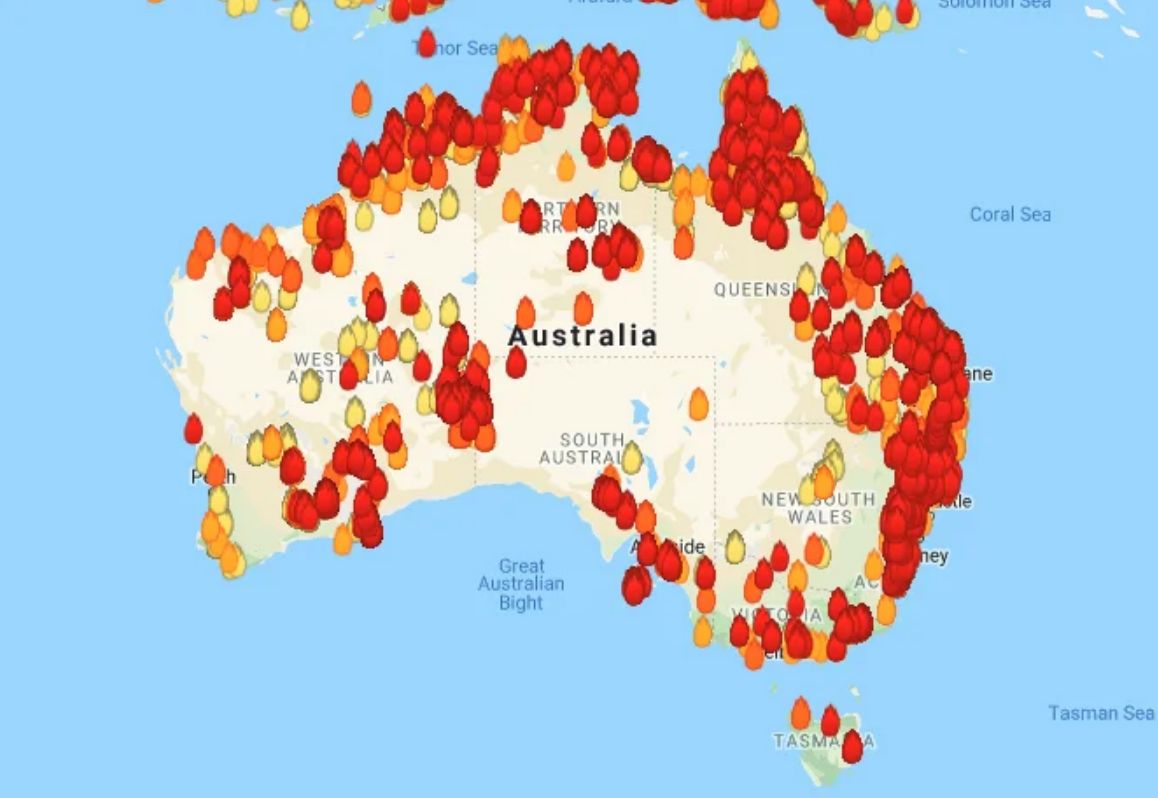 At 10pm 94 fires continue to burn across NSW, 58 yet to be contained. Crews will use easing conditions tomorrow to work on strengthening containment lines. You should take the opportunity to prepare your property and family for the threat of fire. How fire proof is your plan? pic.twitter.com/25CXvx7jI2

What Scott Morrison saw landing into Sydney tonight, after an hour delay because of runway closures #auspol pic.twitter.com/qUDTLDzLaw

There are now only 2 routes out of Sydney. Every other road is blocked by fire. pic.twitter.com/Njx6LveYKq

On Thursday, December 19, two firefighters were hailed as heroes as they died battling fires near Sydney. They were identified as Geoffrey Keaton, 32, and Andrew O’Dwyer, 36, both fathers to 19-month-old children. The two had been volunteering with the Rural Fire Service (RFS). Three other firefighters sustained burns in the accident. The state government had declared a state of emergency in NSW after record-breaking temperatures worsened the bushfires.

RFS Commissioner for New South Wales Shane Fitzsimmons said, "Catastrophic fire conditions are as bad as it gets. They are the very worst of conditions. Given we have a landscape with so much active fire burning, you have a recipe for very serious concern and a very dangerous day."

"We have seen property impacted and lost. We have 3 000 firefighters and emergency services personnel out there dealing with the fires. We will not get on top of these fires until we get some decent rain– we have said that for weeks and months."

Right now, in Australia, the fires are so large that they're creating their own thunderstorms.

All but two of the routes out of Sydney are blocked by flames.

Temperatures in outskirts are hitting 47C, too hot to survive outdoors.

australia is still burning & has been for months & is only getting worse. fire fighters have been out battling for weeks and aren’t being recognised like they should be. the government doesn’t care & besides in australia their is no media coverage #AustraliaFires #AustraliaBurns pic.twitter.com/KjJmib3vGK

Ring of Fire in Australia…
Please God help them. pic.twitter.com/ZVsq1KtTaF

People are now preparing for the worst, and "everyone is very nervous about it," said Peter Dunn, a former commissioner for the Australian Capital Territory Emergency Services Authority and a member of the advocacy group, Emergency Leaders.

On December 10, a spokesperson for the NSW Department of Planning, Industry, and Environment said the current period of poor air quality is the "longest and "most widespread" in the state's history. Landmarks such as the Sydney Opera House and the Harbour Bridge were seen smothered in smoke.

Lightning strikes ignited a series of fires in East Gippsland on November 21, initially endangering the communities of Buchan, Buchan South, and Sunny Point.

Over 100 firefighters had been sent from Western Australia as of November 14.

On November 13, a water-bombing helicopter crashed while fighting the blazes threatening the small community of Pechey in Queensland. While the Bell 214 helicopter was completely destroyed, the pilot only sustained minor injuries.

Catastrophic fire danger was declared in the Greater Sydney region for the first time on November 12, since the introduction of this level.

In late October, four bushfires burned near Scamander, Elderslie, and Lachlan in Tasmania.

On September 7, multiple out-of-control blazes threatened townships across South Eastern and Northern Queensland, destroying 11 houses at Sarabah, 7 houses at Stanthorpe and 1 house at Mareeba in Queensland.