Scientists observing Italy's Mount Etna are reporting new strombolian activity at the volcano and gradual reawakening of the volcano.

The first to 'wake up' was the Bocca Nuova, which is producing strong and continuous roaring for some weeks now.

"The activity is gradually increasing in intensity, and recent thermal images clearly show Strombolian explosions that take place at two mouths located at the bottom of the crater," Behncke and Neri noted.

The incandescent material is occasionally ejected into the air and over the edge of the crater but it falls mainly back inside of it. 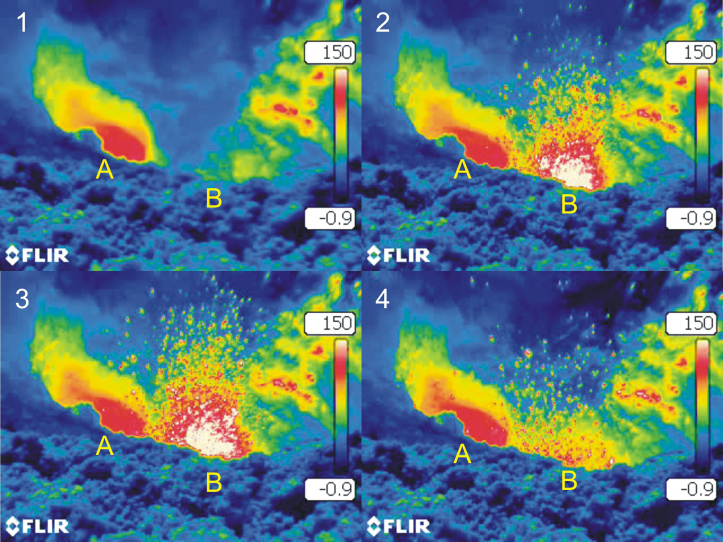 Thermal images of a Strombolian explosion, located at the bottom of the Bocca Nuova crater, shown in sequence (from 1 to 4). At the bottom of the crater are two openings (A and B), which eject incandescent material up to a few tens of meters in height. The images were taken July 17, 2018, by Giuseppe Salerno (INGV-OE).

During the eruption of May 2016, this crater was completely blocked by the volcanic material, but it reopened in November 2017 and continued emitting gaseous plume that characterizes it.

The crater now shows a progressive increase in intensity, with new mouths opening at the bottom, one of which produces small Strombolian explosions. 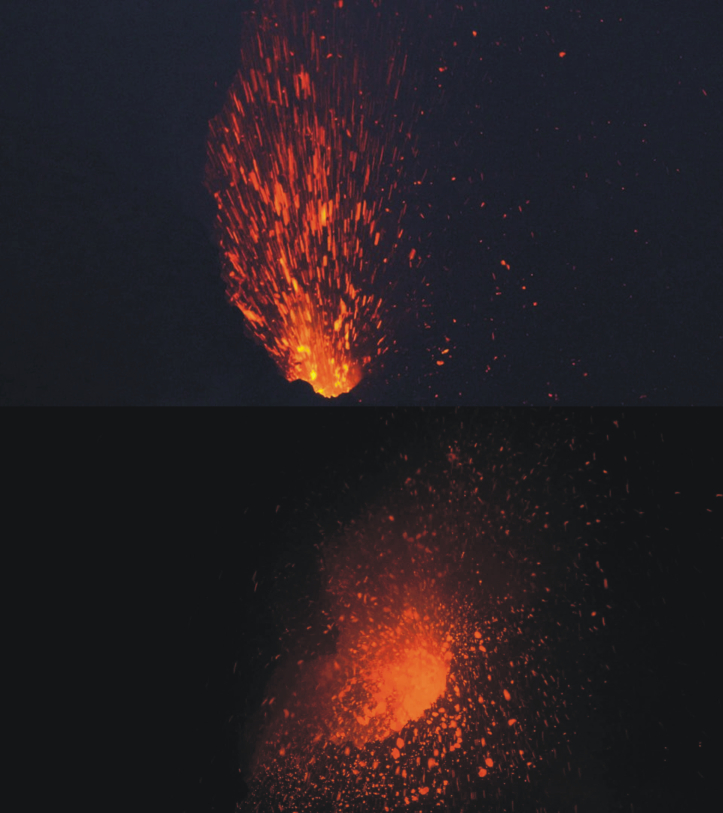 Strombolian explosions on the bottom of the Northeast Crater on July 20 and 21, 2018 captured by Michele Mammino. There are three vents on the bottom, one of which ejects incandescent material up to 10 m (33 feet) into the air.

Video taken on July 12 shows explosions with glowing lava fragments inside one of the four summit craters of Etna. "The voice of Etna is loud and clear," Behncke said.

The voice of Etna is loud and clear. While the Bocca Nuova, the largest of Etna's summit craters, is filled with gas, the sounds of Strombolian activity (explosions ejecting incandescent rock fragments) are well audible. 12 July 2018 pic.twitter.com/TQ6TD0vPdz

Direct monitoring of volcanic activity at Mount Etna complements the analyses carried out through the INGV instrumental networks and therefore allows a complete and precise picture of the volcano's activity status. A job that is especially necessary especially this summer, when the volcano is frequently visited by tourists and fans of Etna.