U.S. Marine Helicopters are ready to evacuate residents of Hawaiian Big Island as lava flows stream into the ocean and molten rock and huge cracks threaten to block their final escape route. Some 2 000 people have faced mandatory evacuations while another 2 000 may be forced to leave is State Highway 130 becomes blocked.

The Hawaiian Volcano Observatory reports multiple small eruptions on May 24 ejected ash to under 3 km (10 000 feet) above sea level, with one of the largest at 20:30 UTC.

Fissure 22 continues to erupt lava that is flowing southeast to the coast where lava is entering the ocean. Fairly tall fountains at Fissures 6 and 13 feed lava into a channel that reached the coast yesterday making a second ocean entry.

Fissure 7 and 21 are feeding a pahoehoe flow that has advanced eastward covering most of the area bounded by Leilani Blvd, Mohala St., and and the fissure line. Meanwhile, Fissure 17 continues weak spattering while Fissure 19 and 23 are no longer active. 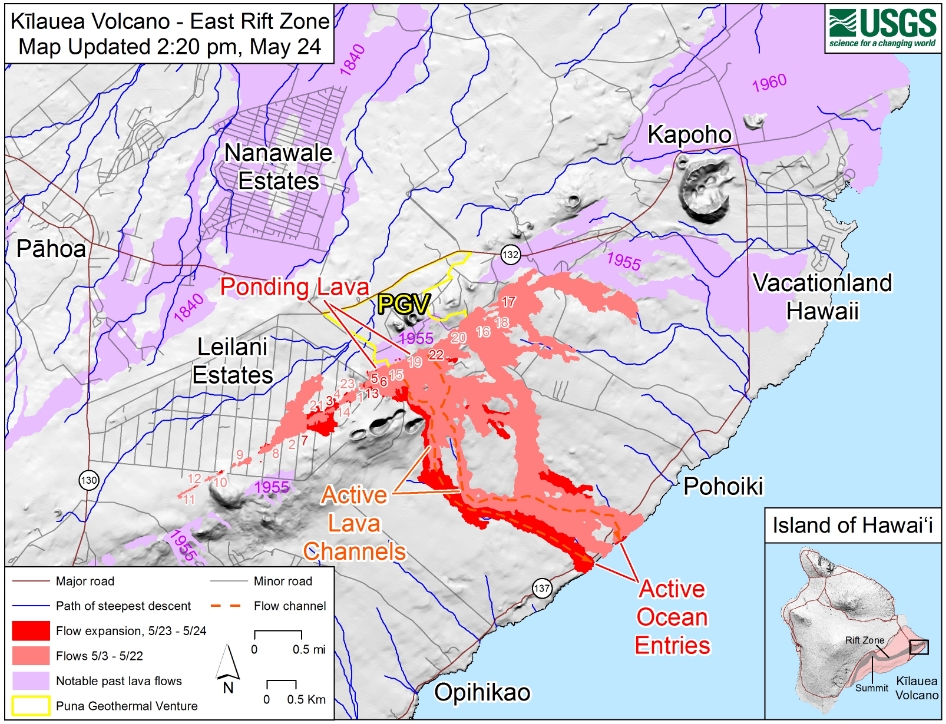 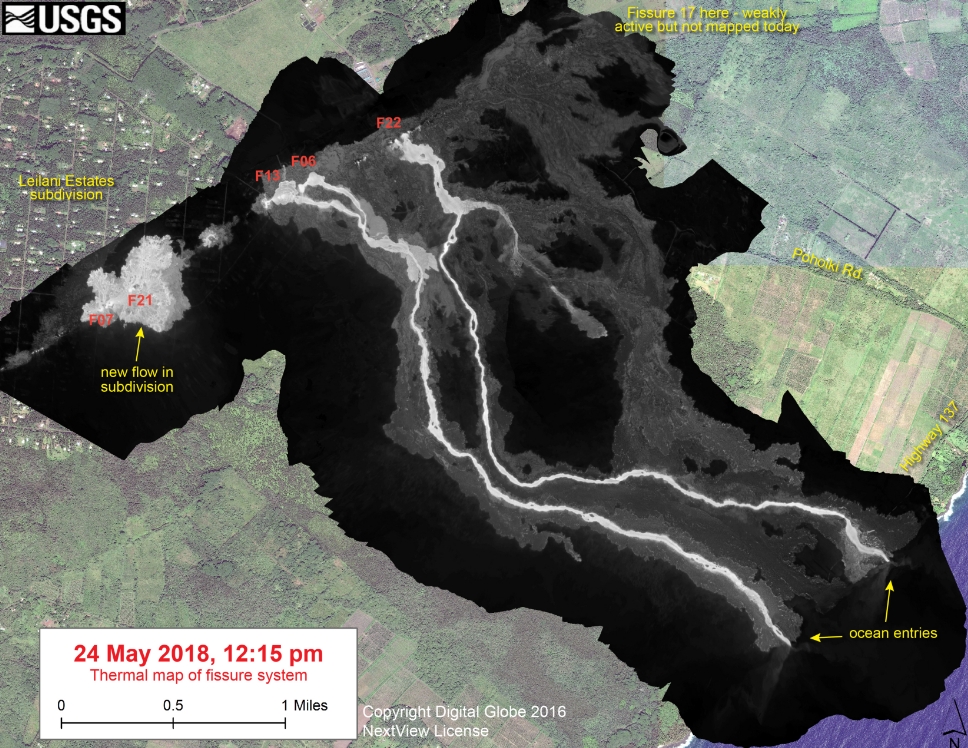 The eruption has so far destroyed at least 50 rural homes and other structures, placed 2 000 people under mandatory evacuation orders. However, another 2 000 people in coastal communities may be forced to leave their homes if State Highway 30 becomes blocked. This is their last exit.

"We now have the capacity to evacuate all of the estimated population of lower Puna south of the lava flow within a few hours," Brigadier General Kenneth Hara of the Hawaii National Guard said in a statement.

"Venturing too close to an ocean entry on land or the ocean exposes you to flying debris from sudden explosive interaction between lava and water. Also, the lava delta is unstable because it is built on unconsolidated lava fragments and sand. This loose material can easily be eroded away by surf, causing the new land to become unsupported and slide into the sea. In several instances, such collapses have also incorporated parts of the older sea cliff. Additionally, the interaction of lava with the ocean creates 'laze', a corrosive seawater plume laden with hydrochloric acid and fine volcanic particles that can irritate the skin, eyes, and lungs."

In 2000, two people were killed after lava flowing into the sea created the poisonous gas. The current eruption is not the first time the state has been subject to laze.

Featured image: Fissure 22 on May 22, 2018. Credit: U.S. Department of the Interior Office of Aviation Services