Figures come from a newly-developed 305-year record of rainfall for Ireland, compiled by senior lecturer in Geography at Maynooth University, Dr. Conor Murphy and a team of national and international collaborators. The record provides monthly rainfall totals representing the island for each month since January 1711.

The derived record, one of the longest continuous series in Europe and the world, offers valuable insights for understanding multi-decadal and centennial rainfall variability in Ireland, and provides a firm basis for benchmarking other long-term records and reconstructions of past climate. Correlation of Irish rainfall with other parts of Europe increases the utility of the series for understanding historical climate in further regions.

"The most recent decade was our wettest on record and, when we look at the long-term context, we see a continuous rise in annual and winter rainfall. This is consistent with expectations of human-driven climate change," Dr. Murphy says.

The record shows that Ireland’s weather was at its wettest between 2006 and 2015 and reveals that over the long-term winters are getting wetter and summers drier. Dr. Murphy and his team compiled data from the UK and Ireland, including work from the 1970s by the UK Meteorological Office which was previously unpublished.

"The record draws on the very earliest rainfall observations made in this region, together with weather diaries compiled during the 1700s," according to Dr. Murphy.

"The task of stitching all the data together was first undertaken by UK Met Office staff in 1979 – work which was largely forgotten until recently. In those days there was not as much emphasis on publishing research in scientific journals and their work was just reported in an internal memo," Dr. Murphy said.

"We were able to merge that Met Office record with another, quality-assured dataset, which we recently compiled for Ireland for the period of 1850 to present. When combined, the derived record gives us an unprecedented picture of rainfall variations for every month from 1711 to 2016," he said. 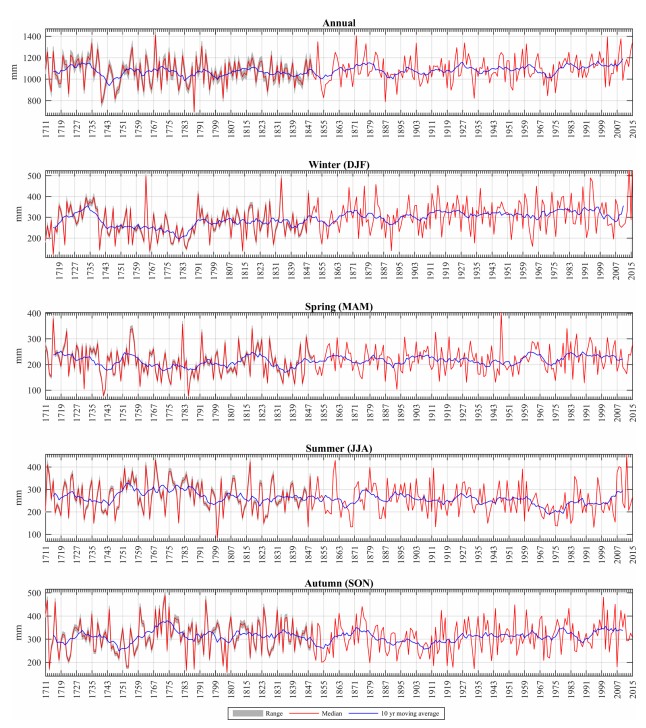 Reconstructed IoI_1711 precipitation series showing annual and seasonal totals. The grey shading shows the uncertainty in the reconstruction from resampling of the baseline used to estimate AAR only. The red line (used in subsequent analysis) is the median of the 1000 resamples. From 1850 onwards the data is the IoI_1850 series produced by Noone et al. (2016). The blue line represents a 10-year moving average. Credit: Murphy et al.

Wet weather has had significant effects. Winter 2015/16 saw extensive flooding across Ireland, while winter 2013/14 was the stormiest on record.

"These winters which not only took place during our wettest decade, are also the first and second wettest individual winters on record."

The rainfall series has also many practical uses.

Dr. Murphy explains: "This record can be used to track changes in rainfall both natural and driven by human activities."

"The range of variability and the extreme events contained in our record also offer valuable information for stress testing critical infrastructure such as flood defences and water supply systems."

"This helps ensure that vital water services are resilient to future wet and dry periods in Ireland."

Abstract. A continuous 305-year (1711–2016) monthly rainfall series (IoI_1711) is created for the Island of Ireland. The post 1850 series draws on an existing quality assured rainfall network for Ireland, while pre-1850 values come from instrumental and documentary series compiled, but not published by the UK Met Office. The series is evaluated by comparison with independent long-term observations and reconstructions of precipitation, temperature and circulation indices from across the British–Irish Isles. Strong decadal consistency of IoI_1711 with other long-term observations is evident throughout the annual, boreal spring and autumn series.

Annually, the most recent decade (2006–2015) is found to be the wettest in over 300 years. The winter series is probably too dry between the 1740s and 1780s, but strong consistency with other long-term observations strengthens confidence from 1790 onwards. The IoI_1711 series has remarkably wet winters during the 1730s, concurrent with a period of strong westerly airflow, glacial advance throughout Scandinavia and near unprecedented warmth in the Central England Temperature record – all consistent with a strongly positive phase of the North Atlantic Oscillation. Unusually wet summers occurred in the 1750s, consistent with proxy (treering) reconstructions of summer precipitation in the region.

Our analysis shows that inter-decadal variability of precipitation is much larger than previously thought, while relationships with key modes of climate variability are time-variant. The IoI_1711 series reveals statistically significant multicentennial trends in winter (increasing) and summer (decreasing) seasonal precipitation. However, given uncertainties in the early winter record, the former finding should be regarded as tentative. The derived record, one of the longest continuous series in Europe, offers valuable insights for understanding multi-decadal and centennial rainfall variability in Ireland, and provides a firm basis for benchmarking other long-term records and reconstructions of past climate. Correlation of Irish rainfall with other parts of Europe increases the utility of the series for understanding historical climate in further regions.