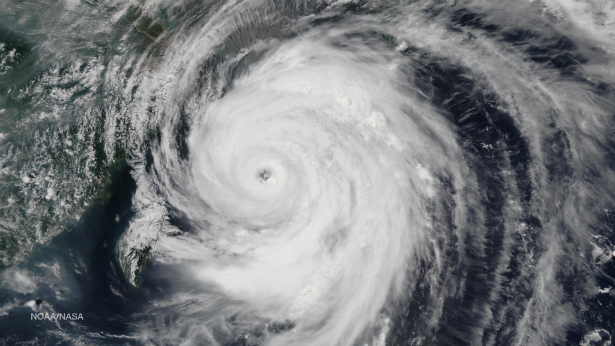 The first super typhoon of the season, Neoguri, continues to threaten lives and property in southern Japan. Neoguri’s center of circulation is now southwest of Kyushu, and it has weakened from “Very Strong” to a “Strong” typhoon (JMA).

Neoguri intensified into a super typhoon early on July 7, 2014 with winds peaking at 250 km/h (155 mph) before the typhoon began to weaken. Neoguri slammed parts of the Ryukyu Islands with wind gusting over 195 km/h (120 mph) on July 8, 2014. At least 10 people have been injured by the storm across Okinawa, where nearly 600 000 were advised to evacuate prior to the cyclone's arrival. At this time, two deaths are reported. 105 000 homes have lost power across Okinawa across the prefecture.

Maximum sustained winds of  190 km/h (118.6 mph) were recorded at Tokashiki Island, according to the Japan Meteorological Agency. Peak winds at Kadena AB in Okinawa reached 162 km/h (101 mph). Waves reached heights of up to 14 m (46 feet).

Neoguri continues to pass through an area of warm sea surface temperature (30 – 31°C) and low vertical wind shear, however, dry air wrapped into the cyclone continues to weaken the system. Visible satellite imagery shows that Neoguri lost it's eye. According to JMA, the system is moving at speed of 25 km/h (15,5 mph) in northwestward direction. The central minimum pressure is 965 hPa. Maximum sustained winds are 120 km/h (75 mph) with gust up to 175 km/h (109 mph). 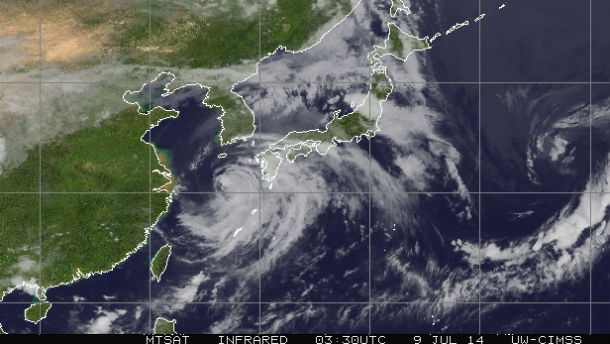 According to JTWC's forecast, Typhoon Neoguri will turn to the east and make landfall in southern Kyushu slightly after 00:00 UTC on July 10, 2014 as a minimal typhoon or possible strong tropical storm. The worst impact is expected around western and southern parts of Kyushu. All coastal communities along the southern and eastern coast of mainland Japan will experience an increase in water levels and extremely rough surf. Torrential rain from Neoguri will generate major flooding and mudslides across parts of Honshu, Shikoku and Kyushu and also across the island of Hokkaido.