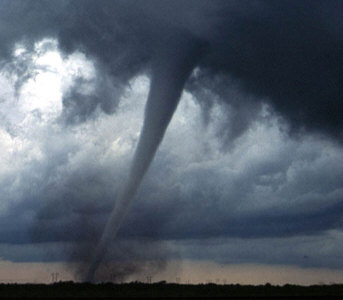 Several homes were destroyed and others damaged Thursday when a tornado touched down near Dexter, Michigan, officials said.

No injuries or deaths were immediately reported, said Marc Breckenridge, emergency management director for Washtenaw County. Authorities were assessing the number of damaged and destroyed structures, he said, adding the twister was not thought to be on the ground very long.

Video from CNN affiliate WDIV showed one home reduced to rubble in a neighborhood, with an adjacent home heavily damaged. Dexter is about 10 miles northwest of Ann Arbor.

The severe weather also affected the western and southwestern areas of Ann Arbor, said Mayor John Hieftje. Some streets were flooded, power lines were downed and one garage was struck by lightning, he said. Parts of the city also received hail, he said. The area was under a tornado warning until about 6:30 p.m., he said.

Bill Marx, head baker at Dexter Bakery, told WDIV he was closing the business when he heard storm sirens. “I stepped outside and saw the clouds turning around,” he said. “It was coming toward us. After it went by, it really started raining and hailing.”

An area resident uploaded video of the tornado approaching Dexter to the Internet sharing site YouTube. “There’s trees flying around,” one person can be heard saying on the video.

A National Weather Service assessment will determine the strength of the tornado. Several counties in the area remained under severe thunderstorm and flash flood warnings Thursday night (local time). (RSOE-EDIS)