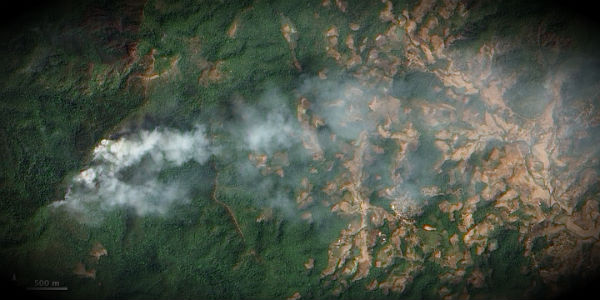 Northern Thailand and parts of Laos and Burma (Myanmar) were blanketed by a thick pall of smoke and haze stemming from widespread agricultural and forest fires in March 2012. The haze pushed concentrations of airborne particulate matter to levels considered unsafe and disrupted service at Lampang airport. The pollution is believed to stem from both forest fires and fires that farmers set alight on their fields to prepare for new crops.

The Pollution Control Department (PCD) has found that the amount of small dust particles – or those in the size of PM10 – is already below the dangerous level in most northern provinces after the heavy rain. Before the rain, the northern region had faced smog-related health threats for weeks.

The level of 323.4 microgrammes per cubic metre was recorded yesterday, after two consecutive days of the district developing critical haze pollution of more than 300ug/cu/m. On Thursday, it was nearly 306ug/cu/m. Natural Resources and Environment Ministry permanent secretary Chote Trachu said that at some points the amount of small dust particles in the air above Chiang Rai’s Mae Sae district soared as high as 438 micrograms per cubic metre of air. 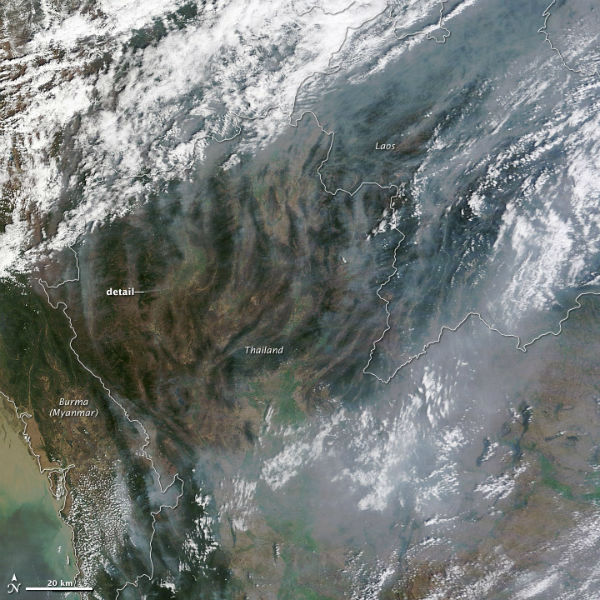 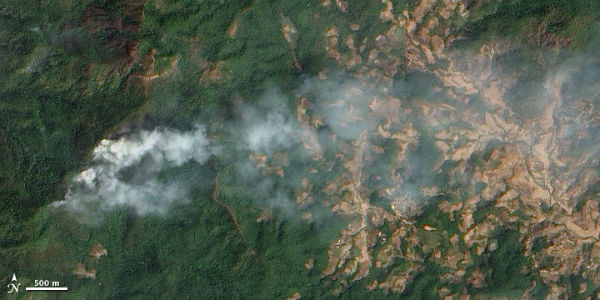 Late winter and early spring are the dry season in Southeast Asia, where the climate is typically dominated by rainy and dry phases of the monsoon. During the dry season, fires of many kinds are common, including intentional fires—to clear crop residues, stimulate new growth of pasture, or clear forests—and accidental (escaped) wildfires.

The Thai provinces of Chiang Rai, Chiang Mai, Lamphun, Lampang, Mae Hong Son, Nan, Phrae, Phayao, and Tak were some of the hardest hit in March, with many seeing particulate levels more than twice as high as the 120 micrograms per cubic meter standard that’s considered safe. In mid-March, the situation improved somewhat due to a heavy rain storm on March 11th and 12th. Nonetheless, on March 15th MODIS showed that a large number of fires were still burning in the region. (EarthObservatory)