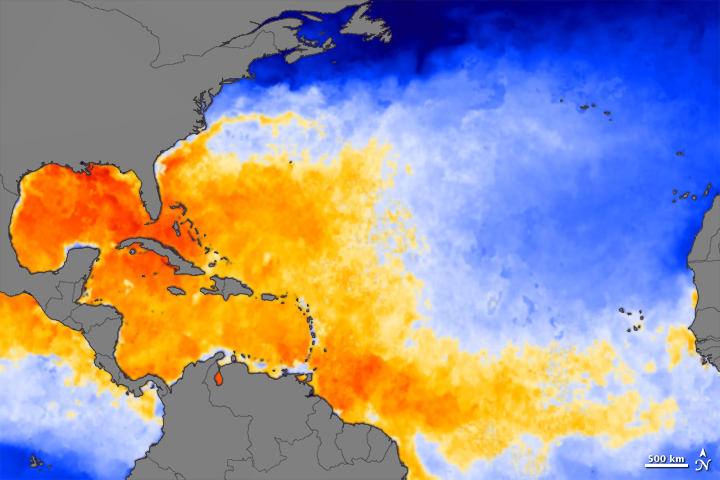 As Hurricane Irene rumbles through the Atlantic Ocean, it needs fuel to sustain itself. Warm water is the main fuel, and there is plenty of it right now, as there usually is this time of year. 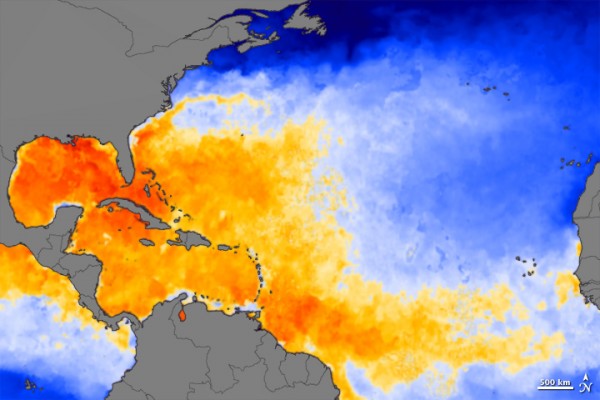 The map above shows sea surface temperatures (SST) in the Atlantic Ocean, Gulf of Mexico, and the Caribbean Sea on August 23, 2011. The measurements come from the Advanced Microwave Scanning Radiometer (AMSR-E) on NASA’s Aqua satellite and the Moderate Resolution Imaging Spectroradiometer (MODIS) instruments on both the Terra and Aqua satellites. The satellites measure the temperature of the top millimeter of the ocean.

Waters typically need to be above 27.8 degrees Celsius (82 Fahrenheit) to properly fuel tropical storms with warm, moist air. Red, orange, and yellow colors depict waters above the 27.8 degree mark. The warmer the water, the more intense the storm can grow, if upper level wind patterns cooperate. In the map above, such waters dominate the Gulf of Mexico and tropical Atlantic in late August 2011. They also run up the southeastern coast of the United States, following the Gulf Stream to Cape Hatteras before giving way to slightly cooler waters (shades of blue) in the Middle and North Atlantic.

As of 5 p.m. Eastern Daylight Time on August 24, 2011, the NOAA National Hurricane Center reported Irene had maximum sustained winds of 195 kilometers (120 miles) per hour and was located at 23.1 degrees North and 74.7 degrees West, about 45 kilometers (30 miles) east-southeast of Long Island in the Bahamas. The forecasted path had the hurricane sweeping over nearly all Bahaman islands, then turning toward the North Carolina coast and eventually New England. Forecasts are updated roughly every six hours.

Irene is the first hurricane of the Atlantic season, and potentially the first to make landfall in the United States in several years. (Earth Observatory)